*This developing story will be updated.

I will join masses of people at Independence Hall today to celebrate our fragile #democracy that just barely beat down creeping #fascism with Black women leading the way for the collective benefit of a bruised & battered nation.

John McCain was a friend and great patriot. I was honored to be a pall bearer at his funeral. While he & President-elect Biden differed on many issues, they respected each other & the institutions of our democracy, articulated beautifully by @cindymccain. John would be pleased!

Proud it was #Pennsylvania that officially put #Biden over the top! #Election2020 #BidenHarris2020

America needs their steady, experienced leadership, especially as we deal with the Covid-19 pandemic & the deep recession it has caused.

We sure will! Can’t wait to get to work. https://t.co/Ptjwb36NMj

We are in this fight with you to build a better nation for this generation, and the next, and I am ready to get to work. pic.twitter.com/BXvRvw74xl

“A record number of Americans made their voices heard in this election, and they chose a vision for our nation that is rooted in working with and for every American. We have a lot of work ahead of us, but with Joe Biden and Kamala Harris in the White House, we can begin on the path to binding our nation’s wounds and move America forward.”

Congratulations to President-elect @JoeBiden. You won the battle for the soul of the nation. pic.twitter.com/ADMZpYqEZe 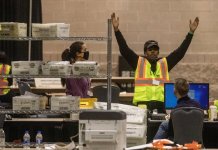 Here’s how one Pa. company is giving back during the pandemic...