*This story was updated at 2 p.m. on Friday, Oct. 9 to include a new comment from the DiSanto campaign.

Pennsylvania’s 15th Senate District was the site of an upset race in 2016, when Republican newcomer John DiSanto ousted one-term incumbent Rob Teplitz, a Democrat, with 51 percent of the vote.

But voters may not get to hear the candidates sound off on issues before then, since current Democratic candidate George Scott says DiSanto has not accepted invitations to a public debate.

Scott told the Capital-Star that his campaign offered DiSanto six potential dates for a debate hosted by the League of Women Voters, a national voting rights organization with local chapters across Pennsylvania.

Those invitations, including a personal call Scott made to DiSanto’s cell phone, went unanswered, Scott said. Now, with less than a month until the Nov. 3 election, the candidates have no plans to publicly defend their positions on education, economic development, or government reform.

“It’s really unfortunate,” Scott, a one-time Congressional candidate, told the Capital-Star Thursday. “I’m ready to do a public debate any time, any place so voters can hear from both of us.”

*In a statement issued Friday, DiSanto’s campaign said he and Scott have appeared in three public forums since the summer to allow voters to evaluate their views: a FaceBook live interview with Harrisburg Mayor Eric Papenfuse, live candidate interviews with PennLive, and pre-recorded television segments that will air on CBS21 over the weekend.

Scott and DiSanto took questions separately at each of those events and did not directly debate one another.

DiSanto said Scott had “has spent his campaign purposely lying about my record and attacking my character,” and challenged him to forfeit his taxpayer-funded pension and per diem allowance if he takes office – something DiSanto did when he was elected to the Senate in 2016.

“If he wants to have an honest debate about issues like taxes, reforming government to end perks for elected officials, and protecting individual rights, he can admit the lies and distortions and then we‘ll talk,” DiSanto said in a prepared statement.

DiSanto billed himself as a political outsider when he campaigned against Teplitz in 2016. 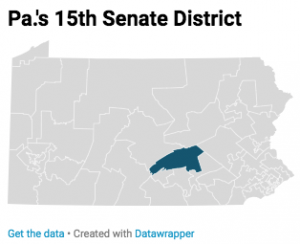 A real estate developer and Dauphin County resident, DiSanto pledged only to serve two four-year terms in Harrisburg, according to PennLive. He said his experience as a business executive would help legislative Republicans deliver new jobs, reduce property taxes and cut government spending.

Scott entered politics when he challenged Republican U.S. Rep. Scott Perry in central Pennsylvania’s 10th Congressional District in 2018, losing by fewer than 3 percentage points. The pastor and military veteran moved from York County to Harrisburg in Sept. 2019, and announced his bid for state senate early this year.

Scott said he’s eager to debate DiSanto on his education policies. DiSanto has been a vocal proponent in his first term of education proposals that use public funds and potential tax dollars to subsidize private school enrollment for public school children.

Scott said he would oppose such policies in the Senate. His education platform calls for boosting funding to K-12 public schools and distributing state aid through a fair funding formula.

Scott said he’d also like his opponent to defend his stances on government reform, including efforts to change how Pennsylvania draws the lines for state House and Senate districts.

As chair of the Senate State Government Committee, DiSanto held a vote last month on a bill that would require lawmakers drawing those maps to abide by new rules and transparency requirements.

Scott said that bill “doesn’t go far enough” to make Pennsylvania’s legislative districts more balanced. He supports a proposal, backed by the grassroots group Fair Districts PA and others, that takes lawmakers out of the redistricting process entirely, giving the job to a commission of appointed citizens.

The Commonwealth Leaders Fund, a conservative political action committee that backs candidates who support school choice legislation, sunk $22,000 on TV ads and mailers for DiSanto between May and June this year – the candidate’s most recent campaign filing publicly available from the Department of State.

Scott’s campaign recorded a $25,000 donation in the same timeframe from a political action committee connected to PSEA, the state’s largest public teachers union.

The COVID-19 pandemic has scrambled most traditional campaign operations this year, forcing candidates to rely on phone banking and no-contact literature drops in lieu of traditional door knocking and canvassing.

But debates, a staple of the election season, have largely proceeded, taking place over Zoom or with plexiglass and socially distant lecterns.

“Clearly, this can be done and people want to hear from the candidates,” Scott said. “I’d go as far as to say debates are a cornerstone of our democracy, since they give voters the opportunity to hear from candidates on issues they care about.”

Eileen Olmsted, director of communications for the League of Women Voters of Pennsylvania, said it’s not uncommon for incumbents to decline debate invitations – Republicans and Democrats alike.

But in Pennsylvania, where Republicans outnumber Democrats in the House and Senate, that means that Republican candidates running for reelection decline events more often than Democrats.

The League has cancelled several candidate forums across the state this year because Republican incumbents did not agree to participate, Olmsted said.

At least eight Republican candidates running for state house seats representing parts of Pittsburgh have declined invitations to debate opponents. In Centre County, a League of Women Voters forum took place without candidates from three House races, since the Republican incumbents did not participate.

Olmsted said the League has hosted candidate forums for decades and “never got pushback from one party or the other.”

“We’re known to be fair,” said Olmsted, noting that all the debate questions candidates field from audience members, and that a debate won’t proceed unless at least two candidates participate.

But in a climate of increasing political polarization, the 100-year-old civic organization is increasingly battling perceptions of partisanship, Olmsted said.

She said that’s contributed to a pattern, in recent years, of Republicans declining debate invitations slightly more often than Democrats.

“It’s not entirely the one party, but it seems to be more that Republicans” decline debate invitations, Olmsted said, emphasizing that refusals still come from incumbents in both parties.

The apparent trend led the Democratic Legislative Campaign Committee, which works to elect Democrats to statehouses, to issue a statement last weekend claiming that Republicans were “on the run” from voters.

The Republican State Leadership Committee, which campaigns to elect Republican legislators, did not respond to a request for comment.

These Pa. lawmakers have 2022 primary challengers by Special To The Capital-Star April 11, 2022
Will the U.S. Supreme Court ever get around to overruling… by Capital-Star Guest Contributor March 8, 2022
Pa. Rep. Perry faces heat for comparing Dems to Nazis during… by John L. Micek June 29, 2021