Whether they want more funding for traditional public schools, or support the growing charter industry, advocates and policymakers across Pennsylvania all agreed on one thing this week:

The debate over charter school funding has reached a “crisis point.”

Gov. Tom Wolf announced Tuesday that he would impose greater regulations and accountability measures on Pennsylvania’s charter schools, which enroll nearly 140,000 students and are supported by taxpayer-funded contributions from public school districts across the state.

Public education advocates, meanwhile, hailed it as a long-overdue amendment to the state’s charter school law, which hasn’t changed since its passage in 1997.

A high-ranking Republican senator from Lehigh County split the difference. Sen. Pat Browne, who chairs the powerful Senate Appropriations Committee, called for lawmakers to return from their summer recess and convene a special session to address concerns about charter school finances.

“The Governor’s actions today are an indication of the seriousness of the concerns for the current funding of public charter and cyber charter schools and its effect on overall public school finance in Pennsylvania,” Browne said in a statement. “It has reached a crisis point creating the potential of significant detrimental effects on all of our students’ progress in school.”

There’s no question that Pennsylvania’s charter law has attracted criticism from all corners of the political arena. Here’s a look at how the law works and what could change under Wolf’s proposal.

What is a charter school?

Charter schools are publicly funded, privately managed schools that have to obtain a “charter” from local school boards in order to open their doors to Pennsylvania students.

Pennsylvania’s charter school law was one of the first of its kind in the nation when Republican Gov. Tom Ridge signed it in 1997. Its intent was to jump-start innovation in schools and offer families alternatives to traditional public systems, Wolf said Tuesday.

Since then, local school boards have granted more than 180 charters to brick-and-mortar schools that currently enroll students in Pennsylvania. The state Department of Education has granted charters to 15 active cyber charter schools, which deliver most of their lessons online.

These schools are privately managed, but get the bulk of their funding from public tax dollars, since school districts send charters tuition for each of their students who decide to enroll there.

Today, those payments from public schools total more than $1.8 billion each year.

Similar to traditional public schools, charter schools are overseen by a board of trustees that makes decisions about budgets, curriculum, personnel, and school operations.

But unlike public schools, the members of charter school boards aren’t publicly elected. They’re appointed according to the rules laid out in a charter school’s bylaws, said Larry Jones, CEO of Richard Allen Preparatory Charter School in Philadelphia.

Proponents say that charters, which do not charge tuition, offer a necessary alternative to families who can’t afford private schools but don’t want to send their children to low-performing public schools.

Since the federal education law No Child Left Behind took effect in 2001, charter schools in Pennsylvania have been subject to the same state-wide student testing and accountability systems as traditional public schools. Brick-and-mortar and cyber charter schools are included in the Pennsylvania Department of Education’s school ranking system, where parents can compare school test scores, graduation rates, and other indicators of success.

How do kids get in?

Under Pennsylvania’s charter law, all public school students are eligible to apply to charter schools for admission. If charter schools get too many applicants, they choose their student body at random in a lottery.

One of the main criticisms of Pennsylvania’s charter schools is that some discriminate against students in the enrollment process.

State law technically prohibits that, but it does grant certain exceptions. For instance, a school can grant preference to students whose parents “actively participated in the development of the charter school” and to the siblings of current students.

Schools can also limit admission to a particular grade level or subject areas like math, science or the arts, as long as they establish a “reasonable criteria” to evaluate student applicants.

Charter school critics say the schools try to boost their test scores by dissuading needy students — including those with disabilities, limited English language skills, or behavioral problems — from applying.

Jones, the charter school executive, said there’s no way to discriminate in the admissions process without breaking the law.

“Cherry picking students is wrong,” Jones said. “I’m sure it has happened, but I don’t believe it’s widespread.”

But Donna Cooper, a former policy secretary under Democratic Gov. Ed Rendell, and the current executive director of Public Citizens for Children and Youth in Philadelphia, argued that charter schools still erect barriers to entry to influence the makeup of their student body.

Charter schools may only print application materials in English, she said, or require that parents attend events to be eligible to apply.

The result, she said, is that poor families or those with low English literacy levels “have a harder time applying and are less likely to be in enrollment pool.”

Indeed, studies show students with severe disabilities and English language learners are more likely to enroll in traditional public schools than in charters.

How are charters different than traditional public schools?

Charter school executives such as Jones say their schools are able to meet student needs because they’re free of some of the bureaucratic restraints that face public school systems.

“When you have a school board, a CEO, and an administration that are all focused on only one school, decisions are made for that particular set of students at that time,” Jones said. “It allows schools to be more nimble, more customized and more focused.”

Since charter schools are independently managed, they can also try out innovative teaching methods and programs for students, Jones said.

His charter school in Philadelphia has changed its start time, implemented Saturday detentions to reduce suspensions, and rolled out a half-day professional development program to encourage collaboration among teachers and parents. When the student body began enrolling more Muslim students, the school changed its calendar to observe Muslim holidays, he said.

When it comes to quality, the best research on Pennsylvania’s charter school comes from a June study by Stanford University, which found that charter school students learn at about the same rate as their public school peers.

This was particularly true in urban charter schools that predominantly enroll minority students, which led Stanford researchers to conclude that charters carry particular benefits for those students.

Cyber charter schools, one the other hand, saw “substantially negative learning gains in both reading and math.”

Researchers estimate that the students in Pennsylvania’s 15 cyber-charter schools, on average, lost the equivalent of 106 days of instruction in reading and 118 days in math compared to their peers in traditional public schools.

What do critics say?

Public school advocates say that tuition payments to charter schools are breaking their budgets and forcing them to levy tax hikes on local property owners. If current trends continue, they say, public school coffers will run dry and worsen the quality of education for students.

Payments to charter schools have increased by 10 percent since 2016, outpacing increases in state education funding, according to a report by two groups representing public school administrators.

Traditional public school advocates also say that charters spend too much on overhead costs and not enough on students.

A 2016 study by  the Pennsylvania School Boards Association, which represents locally elected public school board members, found that administrative budgets at charter schools are nearly double those in traditional public schools.

What would Wolf’s proposal do?

Wolf wants to use the regulatory and rule-making powers available to the executive branch to increase accountability and transparency in the charter sector.

Among other measures, his plan will limit enrollment in underperforming cyber charter schools, subject charter school boards to new ethics requirements, and create a fee-based model to recoup the money the state Department of Education spends administering the charter school law.

Cooper, who oversaw education policy for Rendell, said Wolf’s proposals may draw challenges from charter supporters. But she thinks the plan he outlined Tuesday is within the limits of the law.

“I give him a lot of credit,” Cooper said. “There is a lot of opportunity within regulatory environment that [past administrations] did not take advantage of.”

Wolf’s proposals won’t grant public school advocates’ biggest wish, which is to change the funding formula that dictates how much districts must pay in tuition when their students enroll in charter schools.

That power resides with the state Legislature, which has historically been reluctant to take any action to limit charters.

She said the debate over funding has pit the charter sector against traditional public schools and distracted them from their shared goal of educating children. She hopes that a measured, data-informed discussion among stakeholders will quell the rancorous funding disputes once and for all.

“We’re not talking about children. We’re talking about funding,” Meyers said. “Districts think they have the short end of the stick, and we think we [do] … We definitely support a fair and balanced funding commission to bring all stakeholders together to have a meaningful discussion so we can go back to focusing on students.”

At a Senate Education Committee hearing on Wednesday, David Lapp, an education researcher, said that all charter schools and traditional public schools in Pennsylvania suffer from the same problem: underfunding.

“Charter schools are underfunded because they are, for the most part, located in school districts that are themselves underfunded,” Lapp said. 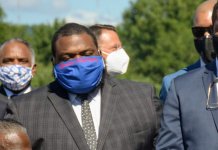 As Democrats aim to flip the House, a top lawmaker took $600K from school choice donor trying to stop them

▪ You can publish our graphics and any photos that are credit to Pennsylvania Capital-Star with the stories with which they originally appeared. For any other uses, you must seek permission from us at [email protected].com.

‘It’s not a party that John Heinz would recognize’: Tom Nichols...