Former state Sen. John Wozniak hasn’t served in the General Assembly since 2016. But lawmakers still borrow a trademark phrase from the Cambria County Democrat, who was a longtime proponent of school district consolidation.

The difficulty of school district consolidation was the topic of a bipartisan hearing Monday held by the Senate’s Majority and Minority Policy committees, where senators and education experts discussed the possibility of reducing the number of public school districts across the state.

Legislatures in Maine and Arkansas have tried to force district consolidations in recent years. But the discussion in Pennsylvania’s Capitol on Monday doesn’t mean the same thing is on the way in the Keystone State, said Minority Chairwoman Sen. Lisa Boscola, D-Northampton.

“We recognize this is a very complicated, difficult issue, but we must cross this bridge at least to find out if there is a better way to do this,” Boscola said. “This is merely a discussion aimed at identifying, clarifying, and understanding the advantages and disadvantages and challenges that come with school consolidation.”

The idea has been a point of enduring fascination for lawmakers, some of whom hope that consolidations would reduce administrative and operating costs for districts, thereby improving the quality of education for students and alleviating the burden on their taxpayers.

Pennsylvania is home to 500 public school districts that enroll 1.5 million students, according to Department of Education enrollment data. (That number doesn’t include the students enrolled in charter schools, intermediate units, or schools in state correctional facilities.)

But in the past two decades, the state has seen just one successful school district consolidation, which resulted in the creation of Beaver County’s Central Valley School District in 2009.

That merger allowed two districts with flagging enrollment rates to reduce their administrative costs and increase their academic and extracurricular offerings for students. But it also presented a series of hurdles that would emerge in any similar arrangement across the state, said Yelena Khanzhina, author of a 2017 Joint State Government Commission report on district consolidation.

For starters, the Central Valley consolidation showed just how expensive it can be to combine two or more school systems with different curriculums, facilities, and labor agreements. Equalizing pay between teachers and rewriting a district curriculum were two of the leading costs from the Central Valley merger in 2009, Khanzhina said.

Majority Policy Committee Chair Sen. David Argall, R-Schuykill — who favors eliminating school property taxes and funding districts through personal income and sales taxes instead — posited that those concerns are usually “a much bigger deal for adults than students.”

Argall suggested that Pennsylvania could replicate for education its system for merging municipal police forces — a process that has shown long-term cost savings after an initial period of transition costs.

Towns contemplating a police merger can apply for a Department of Community and Economic Development grant to fund a feasibility study. Argall noted that no similar program exists for municipalities considering a school district merger.

Given the inevitable difficulty of consolidation, Sen. Judy Schwank, D-Berks, said Pennsylvania has to help districts that want to take the plunge.

“This gets back to educational equity, which is why I think the commonwealth should play some role,” Schwank said. “Any kind of assistance we can offer to smooth out some of those [consolidation] costs would be huge.” 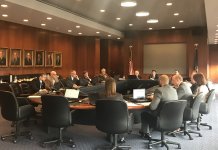 In Philly, library advocates demand $19.3M in new funding ahead of...