Cheyney University administrators allegedly misused federal education dollars, raided a scholarship program to pay university employee salaries, awarded full scholarships to undeserving students and inflated enrollment figures in an effort to save the school’s accreditation, according to a lawsuit from a former employee who oversaw the school’s prized grant program.

Nicole Rayfield, of Glenolden, says she warned university administrators about their actions, and they fired her in retaliation.

She has filed a lawsuit in the U.S. District Court for the Eastern District of Pennsylvania in July under the state’s whistleblower law, wrongful termination law, and Family and Medical Leave Act.

Walton declined to address the allegations in the lawsuit, saying he does not respond to ongoing litigation.

But Walton, who took over the struggling school in 2017, pushed back against the allegations the school was misrepresenting the size of its student population.

“Cheyney is not inflating numbers,” he said in a phone interview. “Our numbers are reported on a daily basis to the state system. They are validated and verified. So we can’t submit numbers that we can’t substantiate.”

Robert Bogle, the president of The Philadelphia Tribune, is the chairman of the university’s council of trustees. He did not immediately respond to a request for comment.

The complaint filed by Rayfield paints a damning picture of a university desperately attempting to stave off financial woes and the loss of its accreditation in November from Middle State Accreditation Commission, the regional accrediting body.

The university, one of 14 schools in the state’s system of higher education, is the oldest historically Black university in the country.

Cheyney’s accreditation has been at risk since 2015, when the Middle States commission put the school on probation that year for failing to meet compliance standards, including balancing its budget.

After two accreditation extensions and no mechanism for another one, the Middle State commission will convene on Nov. 21 to determine whether Cheney will keep its accreditation.

If Cheyney loses its accreditation, it will not be allowed participate in federal aid programs, which means it will lose millions of dollars in federal funding.

The U.S. Department of Education already was scrutinizing the schools for its sloppy oversight of $29.5 million in federal funds the school received between 2011 and 2013. Cheyney has remained on the education department’s “Heightened Cash Monitoring 2” list over the issue since 2015.

Rayfield, who worked at Cheyney from 2014 until her employment was terminated last year, most recently oversaw and administered the school’s Keystone Honors Academy, a program that provides full scholarships to qualifying students, who make up a significant portion of the school’s population.

Walton, Jones and the school “improperly gave scholarships with the purpose of inflating enrollment so the University could pass the Middle States Accreditation, and students who withdrew were not purged to make the enrollment number larger,” she said in the lawsuit.

This is the crisis in higher education in Pennsylvania | Fletcher McClellan

Shortly after Jones arrived at Cheyney in May 2018, Rayfield alleged, Jones usurped the Keystone scholarship program Rayfield had been managing, according to the lawsuit.

Jones scrubbed scholarship information from the university’s website and directed all inquiries about the program to himself, according to court documents.

Jones also “misinformed students about the rules, policies, and procedures” of the program, Rayfield alleges, and unlawfully and inappropriately awarded scholarships to unqualified students while denying those to qualified students.

In August 2018, Cheyney made offers to 18 students who did not meet the high minimum qualifications for the Keystone scholarship, according to the lawsuit.

Court documents allege Clifton Anderson, a university consultant, stated that Jones was using the scholarship program “to change the quality of students being brought in to Cheyney” and that Cheyney employees “must be ‘flexible’ in their interpretation of the scholarship requirements.”

The result created confusion among students and left some questioning “the fairness of the Keystone program,” according to the lawsuit.

In one example, Jones allegedly awarded a scholarship to a student who did not meet the GPA requirements “simply because she was a family friend of his, with the hope that her mother would encourage other potential students to attend Cheyney,” according to court documents.

Jones allegedly awarded some scholarships to students without obtaining transcripts, which led to a decrease in enrollment when scholarship students were wrongly billed for the semester classes, according to court documents.

In addition, Jones “directed that certain scholarship funds go to unauthorized and improper sources,” according to court documents.

But Walton and Jones used “leftover scholarship funds to pay certain staff member salaries, including those in the financial aid and bursar’s offices,” according to court documents.

Rayfield said she warned school officials multiple times about the misuse of federal scholarship dollars and policy violations. Jones responded by attacking Rayfield “on her capabilities” and used “all capital letters” in his emails, according to court documents.

Rayfield said she sent an email to Walton in December 2018 about her concerns about the administration of scholarships and Jones, but never received a response.

Rayfield attempted to take medical leave from the university following a fall in November 2018 that required surgery, according to court documents.

But the university terminated Rayfield’s employment on Jan. 24 to due financial reasons, according to court documents. Rayfield alleges her termination was retaliation on the part of Walton and Jones.

Rayfield is seeking monetary damages in excess of $150,000, including reinstatement to her job, back pay and legal fees, among other things.

Rayfield’s attorney, Jenniger Bell, did not return a call seeking comment on Monday. 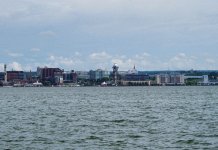 Holocaust Remembrance Day 2021: 5 websites to help educate about the...