A Dauphin County judge halted a meeting of the embattled Harrisburg School Board with an injunction Thursday night, just minutes before board members were expected to vote publicly on new contracts for top administrators.

The deputies served each board member with copies of the injunction, originally sought by the state Department of Education, that forbade them from entering into any contacts, Fowler said.

“What message does this send to our children, our educators, our teachers, our community, the taxpayers?” an exasperated Fowler told reporters outside the school building. “This is just complete craziness. I never expected to walk into an executive session and see two sheriffs walk in with guns 15 minutes later.”

The private session for board members, which is permitted under certain circumstances by Pennsylvania’s public meetings law, was to precede a public meeting where the board planned to vote on unspecified contracts and a slew of personnel actions, including hiring teachers for its summer programs.

Members of the public speculated that the unspecified contracts were for superintendent Sybil Knight-Burney and solicitor James Ellison.

The board voted to rehire Knight-Burney a year ago and approved Ellison’s hiring this spring, but has not publicly voted on their contracts.

Lawyers for the Department of Education asked a Dauphin County Court of Common Pleas judge Thursday morning to prevent the board from approving any new contracts until the judge rules on a separate petition, filed by Education Secretary Pedro Rivera on Monday, to put the district under state control.

In his petition, Rivera cited the lack of contracts for Ellison and Knight-Burney as evidence that the district failed to comply with its state-mandated recovery plan.

He asked a Dauphin County judge to appoint the district’s chief recovery officer Janet Samuels as receiver — a role that would give her executive authority over the district, except for the power to levy taxes.

Samuels declined to speak with reporters as she exited the administrative building Thursday night.

In the past year, administrators have beat back a steady stream of controversies, including costly accounting errors, a grading scandal, and record-breaking staff resignations.

Union leader Michelle Rolko said Thursday that the district’s 460 teachers don’t know what to expect if a judge puts the district into receivership. She worries that state control could make it even harder to recruit and retain teachers.

She said two or three teachers have resigned this week, perhaps as a result of the receivership petition. The district still has multiple positions it hopes to fill before the new school year starts in September, Rolko said.

“People have a lot of challenges staying here because we’ve had so many things happen,” Rolko said. “It’s definitely been a challenge and it definitely hurts our kids the most. If they’re not getting their needs met because we don’t have the resources, we’re doing an extreme injustice to them.” 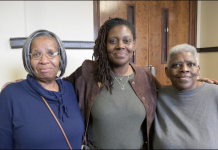 At this Philly school, students learn skills to serve them beyond the classroom