Athletes and parents rally for school sports in Harrisburg

Arguing that they’d suffer physical and emotional setbacks and jeopardize their scholarship and recruitment chances, more than 100 high school athletes and their supporters rallied on the state Capitol’s steps Thursday to deliver a simple message to Gov. Tom Wolf:

“I have been struggling with feelings of anxiety and powerlessness these past few months,” a student athlete entering her senior year told the crowd Thursday. “I am trying to find ways to cope, but the toll the response to this virus is taking on us kids is just too great.”

Event organizers and attendees said Thursday’s event was the result of mobilization on Facebook, where a group of concerned parents and students mounted a digital campaign to press the Wolf administration and the Pennsylvania Interscholastic Athletic Association, or PIAA, to let the fall season proceed.

Elected officials who spoke at the rally, including Senate Majority Leader Jake Corman, R-Centre, criticized what they said was executive overreach by the Democratic governor, who has also issued a universal masking order and shuttered most bars and nightclubs this summer as Pennsylvania beat back a surge of COVID-19 cases. 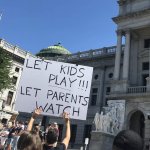 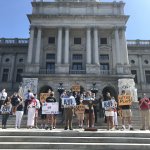 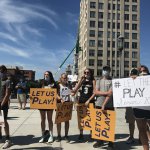 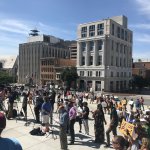 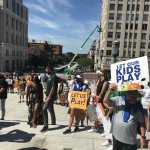 Nick Lincoln, a one-time high school football coach in Philadelphia and leader of a community anti-violence non-profit there, said that the threats to school sports stemmed from poor federal leadership — an implicit admonishment of the Trump administration that was met with surprised silence from the crowd.

“As I join you in the rally cry to let them play, I’m also asking for you to continue our fight for young people in the city, and consider letting them just breathe,” Lincoln said, invoking a slogan of the Black Lives Matter movement.

The battle over school sports in Harrisburg is playing out as teams across the state have already begun pre-season practices.

Pennsylvania schools were permitted to resume sports practices this summer once their school board approved a health and safety plan outlining their protocols to prevent the spread of COVID-19 among athletes and staff.

Some teams have introduced daily temperature checks for students and coaches; others have modified workouts and schedules to promote social distancing.

While those plans appear to have been broadly effective in protecting student athletes from COVID-19, sports teams have not been totally insulated from exposure this summer.

Infectious disease experts say that outdoor activities are among the safest ways to socialize and exercise during the COVID-19 pandemic, since the airborne coronavirus does not appear to transmit as easily in ventilated settings as it does indoors.

But they also warn that the risk of spreading COVID-19 is higher in sports that involve close contact between athletes, such as wrestling or basketball.

Athletes and parents rally for school sports in Harrisburg