On Tuesday, attorneys for Maureen Faulkner alleged in a King’s Bench Petition filed with the state Supreme Court that Krasner was tainted with conflicts of interest in the Abu-Jamal case and filled his office with Abu-Jamal sympathizers.

“The people who Larry Krasner has filled the top of his staff with are people who have dedicated their legal careers to making sure that justice doesn’t happen, to preventing that justice for Daniel Faulkner,” Faulkner’s attorney Jack O’Neill said at a news conference inside the Fraternal Order of Police Lodge 5.

George Bochetto, another Faulkner attorney, predicted the ex-Black Panther could regain his freedom if the state Supreme Court didn’t disqualify Krasner from the case and give it to another prosecutor.

“Mumia could be free by Christmas on the streets — that’s how close we are,” he said.

John McNesby, president of the police union, said Abu-Jamal’s case will have a ripple effect throughout the country.

“People are watching this case very closely,” he said. “And if this guy gets out of prison, it’s going to be a free ticket for every cop killer in the country.”

Krasner’s office did not immediately return an email seeking comment.

Suzanne Ross, a lawyer for Abu-Jamal, said in a phone interview that Faulkner’s petition was a desperate attempt to reverse a judge’s decision last year that breathed new life into Abu-Jamal’s attempts to get a new trial in the decades-old case.

“Even the door being slightly opened to a modicum — a bit — of justice, Maureen Faulkner is fighting that,” she said.

Pam Africa, a social justice advocate and long-time Abu-Jamal supporter, said during a phone interview that Abu-Jamal’s case had been tainted with judicial and prosecutorial misconduct until Krasner, a Democrat, was elected in 2015.

“It’s a new day now and people are attempting as best they can go by the color of the law,” she said. “[Krasner] made no mistake in what he did and all she’s doing is opening it up and making it wider for people to see.”

Daniel Faulkner was shot and killed in a physical altercation on Dec. 9, 1981 after he pulled over Abu-Jamal’s brother. Abu-Jamal, who was working as a cab driver nearby, had observed what was happening and ran to assist his brother. Abu-Jamal was found shot and wounded.

Abu-Jamal, born Wesley Cook, was convicted for the murder in 1982. He was sentenced to life in prison. He has always maintained his innocence.

Abu-Jamal seemingly reached the end of his appeals in 2011 when the city dropped his death sentence over allegedly misleading jury instructions. He is currently imprisoned in Mahanoy State Correctional Institution in Frackville.

But Abu-Jamal is seeking a fifth post-conviction review based on evidence that allegedly showed a former state Supreme Court justice, who denied Abu-Jamal’s previous appeal, was biased. The district attorney’s office initially appealed a decision by the Philadelphia Court of Common Pleas that allowed a hearing based on the evidence, but Krasner dropped that appeal in April.

The defense has said the files show prosecutors promised money to one eyewitness, helped another with her prostitution case and made notes about the race of prospective jurors, according to The Associated Press.

Abu-Jamal’s appeal remains in state Superior Court, which will decide whether to grant him a new trial, Ross said. In early December, Krasner was expected to submit a response to arguments from Abu-Jamal’s lawyers for a new trial.

If allowed a new trial, Ross said, Abu-Jamal should be granted bail during the proceedings, but she acknowledged that possibility was unlikely.

The petition is Faulkner’s second attempt to remove Krasner from Abu-Jamal’s case.

Last month, the state Superior Court threw out Faulkner’s petition to oust Krasner over claims his former law firm, and a top deputy in his office, had represented Abu-Jamal in the past, according to The Associated Press.

Faulkner, now living in California, said she was seeking justice for her husband and alleged Krasner was not sympathetic to victims.

Faulkner all but admitted she had no other options to stymie Abu-Jamal’s appeal.

“The bottom line is this is it. We are at the end of our line with our case,” she said.

The police union’s headquarters was filled with Maureen Faulkner supporters on Tuesday.

Among them was Linda Schellenger, the mother of the Center City developer who was stabbed to death last year by a bicycle courier, the latter of whom was later found not guilty of voluntary manslaughter. Schellenger has been highly critical of Krasner and his prosecution of the case.

At-large City Councilman Al Taubenberger, the only councilmember in attendance, called for Krasner to remove himself and his office from the case.

“The record is clear,” the outgoing Republican councilman said. “Personnel in his office were very involved in the appeals Abu-Jamal has made. … He should step aside.” 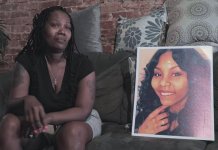