Pennsylvania’s Superior Court, explained: Why you should pay attention to this November race

While much of the public’s attention is already turned to 2020, there is a general election on Nov. 5 that will affect the future of your hometowns, counties, and Pennsylvania’s courts.

The major statewide race to know about involves two vacant seats on the Superior Court.

So what do these judges do, and why should you pay attention? Read on.

What does the Superior Court do?

The Superior Court is one of three statewide appellate courts in Pennsylvania — along with the Supreme Court and Commonwealth Court — and handles criminal appeals as well as most civil ones.

It was the Superior Court that decided in July to grant Robert Williams — better known as Meek Mill — a new trial, leading to the end of the rapper’s long battle with the probation system. The court is also handling Bill Cosby’s appeal.

How are judges elected?

Like Pennsylvania’s other appellate courts, Superior Court justices are elected in partisan elections to an initial 10-year term.

After that, a judge must face a retention election to stay on the bench for another 10 years.

What is the makeup of the Court?

At full complement, the Superior Court is made up of 15 judges. Currently, there are 14: 8 elected as Republicans and 6 elected as Democrats.

Two of those sitting judges — Anne E. Lazarus, elected as a Democrat, and Judy Olson, elected as a Republican — will be on the ballot this November vying to retain their seats.

Judge Paula Francisco Ott, elected as a Republican, decided not to run for retention, creating one of the open seats.

Judge Kate Ford Elliott, elected as a Democrat, created the existing vacancy when she became a senior judge. The status allows judges to retire — either voluntarily or because they hit the mandatory retirement age of 75 — but still serve the court.

Who will be on the ballot this November? 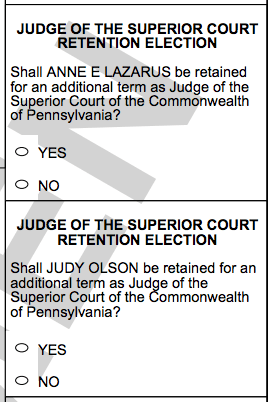 Both Lazarus and Olson will appear on the ballot with a yes or no question about whether they should have an additional term. The political parties associated with their first runs will not appear, as retention elections are nonpartisan.

The ballot will instruct voters to “Vote for not more than Two” of the candidates. Essentially, this means the top two vote-getters will join the court and voters can, if they choose, vote for two.

You can find out more about the candidates in our voter’s guide, coming Oct. 21.

What about Commonwealth Court?

There are no vacant seats for Commonwealth Court on the ballot. Two judges will, however, stand for retention: Kevin Brobson and Patricia McCullough, both elected as Republicans.

What happens if a judge loses a retention election?

This is an exceedingly rare occurrence.

According to Pennsylvanians for Modern Courts, Supreme Court Justice Russell Nigro in 2005 became the first (and still only) appellate judge to lose a retention election. Voters ousted Nigro in the wake of a late-night pay raise for lawmakers and judges approved by the Legislature.

After Nigro’s defeat, then Gov. Ed Rendell appointed Cynthia A. Baldwin to the bench. She did not run for a full term in the 2007 election.

Are there any other judicial races to watch?

Seats on the Courts of Common Pleas, which are county based, and magisterial districts will also be on the ballot. Who, exactly, will be on yours depends on where you live. That’s why it’s key to check a sample ballot before heading to the polls, so you can review the candidates.

Pennsylvania’s Superior Court, explained: Why you should pay attention to this November race