In an order issued Monday, the high court says it’s open to suggestions to improving the existing cash bail system, but “any attempt to advocate for the abolition of cash bail,” is not on the table.

In its order, the court agreed to take on the inquiry as part of its “King’s Bench” powers, which gives it supervisory powers over the rest of the statewide judiciary. Typically, the court only wields this authority in matters of “great public importance. Judge John M. Cleland, a senior judge from McKean County, has been named the special master who will oversee the investigation, court documents indicated.

In March, attorneys for the Pennsylvania branch of the American Civil Liberties Union and the Washington D.C.-based law firm Arnold & Porter Kaye Scholer filed a lawsuit on behalf of 10 incarcerated people, as well as a community advocacy group, arguing that “bail magistrates in Philadelphia’s First Judicial District have failed to consider alternatives to cash bail and have assigned cash bail to people who are too poor to afford it.”

In a statement, ACLU Executive Director Reggie Shuford, said his organization is “grateful that the court understands that this situation needs more investigation.

“People who have not been convicted of a crime are sitting in Philadelphia jails only because they are too poor to pay the bail they’ve been assigned. The Philadelphia courts have effectively criminalized poverty,” he said.

“There are people sitting in Philadelphia’s jails right now who have not been proven guilty of a crime,” Nyssa Taylor, criminal justice policy counsel for the ACLU of Pennsylvania, said in a statement. “Bail hearings in Philadelphia typically last less than three minutes, which is wholly insufficient to inquire into someone’s ability to pay, and the person whose liberty is on the line is not even in the room, as they watch the proceedings by video. The bail system in Philadelphia must change.”

Some legal reform groups, including the Brennan Center for Justice at New York University, have called for the elimination of cash bail, arguing that the decision regarding “whether a defendant should be jailed while awaiting trial is often based on a defendant’s wealth and not on public safety considerations.”

The center’s research has further found that “80 percent of the accused are too poor to afford an attorney, more than 60 percent are people of color, and the bulk of the cases are low-level, non-violent offenses. Most of this population cannot afford bail and are incarcerated before trial for long periods even though they have not been found responsible for any crime.”

“[Sixty] percent of the jail population is not convicted but being held pretrial,” Brennan researchers pointed out in a 2012 report, adding that this “issue is a huge contributor to the mass incarceration of people in the United States, resulting in overcrowded facilities and unsustainable budgets … those too poor to pay a money bail remain in jail regardless of their risk level or presumed innocence … U.S. Attorney General Eric Holder in 2011 stated that keeping people awaiting court dates in county jails costs around $9 billion each year.”

Read the Supreme Court order below: 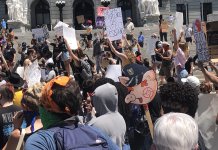 The true fight for police reform is in statehouses across the U.S. This is why | Opinion

As homicides surge, Philly to roll out long-awaited anti-violence strategy