For the first time, Gov. Tom Wolf said he supports legalizing marijuana for recreational use and called on the Legislature to “seriously debate” doing so.

The Democrat’s change of heart was the result of a 67-county tour undertaken by his lieutenant governor, John Fetterman, which found a “substantial majority” of Pennsylvanians are for legalization.

Fetterman kicked off the tour in February and unveiled a report on his findings Wednesday in the state Capitol building.

Wolf and Fetterman also called on the General Assembly to pass legislation to decriminalize marijuana — making possession punishable by a fine, rather than with a misdemeanor conviction — and to expunge past criminal records.

The governor said he’s calling on lawmakers to take both of those actions immediately. The conversation to legalize marijuana could take “a little bit longer.”

“This strikes me as the right thing to do,” Wolf said Wednesday.

Prior to December 2018, Wolf had said he was opposed to legalizing cannabis for adult recreational use. But that month, he said it was “time for Pennsylvania to take a serious and honest look at recreational marijuana,” as neighboring states moved toward legalization.

GOP leadership in the state House responded to Wednesday’s announcement by making one of their own: “Our caucus has no plans or interest in legalizing recreational marijuana.”

“We are disappointed and frustrated Gov. Wolf would promote recreational use of a drug classified as a Schedule I narcotic by the federal government,” a statement attributed to the “House Republican Leadership team” states. “Calling on the Legislature to act now on marijuana legalization serves only as a distraction from the important work lawmakers carry out in Harrisburg and in their home districts.”

What the report found

Nearly 70 percent of the tour’s 10,275 attendees backed legalization, according to the report released Wednesday. When factoring in online feedback, only one county recorded below-51 percent support. 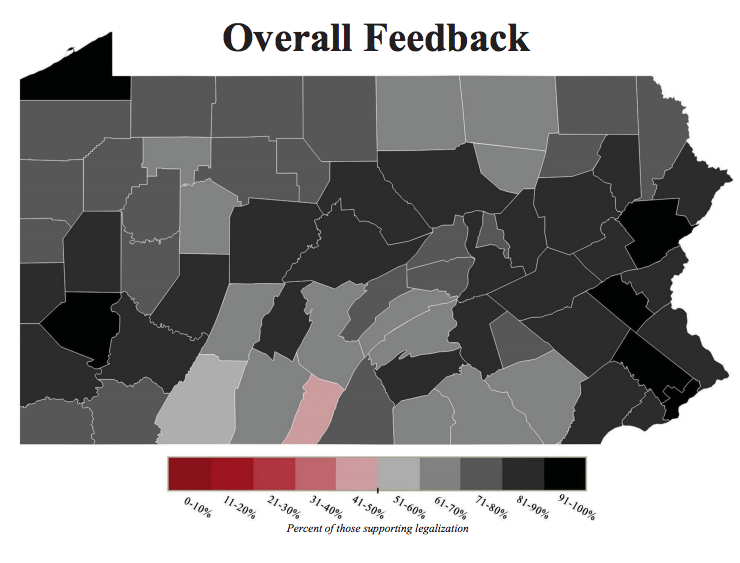 The report also states that support was “near-unanimous” for “decriminalization and mass expungement of non-violent and small cannabis-related offenses.”

Lawmakers in both the state House and Senate have introduced bills to make possession of small amounts of marijuana a summary offense, which is a citation punishable by a fine.

In the upper chamber, the effort is bipartisan: Sen. Sharif Street, D-Philadelphia, and Sen. Camera Bartolotta, R-Washington, are co-sponsoring a single bill.

Street told the Capital-Star the next step is talking to their “respective leadership” about holding public hearings before moving the bill through the legislative process.

When asked if he thinks the bill can pick up enough Republican support, Street said he “always gets in trouble when he starts predicting what the House of Representatives is going to do,” but added that he thinks there’s broad-based support among lawmakers.

In an email, Bartolotta said, “Decriminalizing the possession of a small amount of cannabis is a commonsense policy change to ensure that the thousands of Pennsylvanians caught with minor possession each year are not charged with misdemeanors. These permanent marks on an individual’s record hinder one’s ability to obtain work, housing, child care, among other essential needs for a productive lifestyle.”

“While my legislation still awaits consideration by the Senate Judiciary Committee, I remain hopeful that the measure will find support among my colleagues,” she continued.

The report also reiterates something Fetterman told the Capital-Star in May: that support for medical marijuana is essentially universal.

“I think that’s a remarkable reversal in just a few short years from being a controversial topic to now, even in the reddest county, even with those that are opposed to it recreationally, they love medical cannabis,” Fetterman said at the time.