Criminal sentences are down in PA, and three more takeaways from an annual report

For the second time in two years, the number of criminal sentences given out in Pennsylvania is falling.

That’s according to an annual report from the Pennsylvania Commission on Sentencing analyzing statewide sentencing trends.

Mark Bergstrom, who leads the commission, says the newly released 2018 data show the “continuation of a modest downward trend” in the overall number of criminal cases in Pennsylvania.

But criminal justice reformers say it’s not all good news. Diversionary programs remain woefully underused, they say, and data show that thousands of people are going to prison for technical violations of parole.

Before we dive into the data, here are a few important disclaimers.

First, this report doesn’t include data from Philadelphia Municipal Courts or magisterial district judges, which hand out sentences for driving under the influence (DUI) and other misdemeanor offenses.

It also doesn’t include sentences for Pennsylvania’s most serious murder charges, which carry mandatory sentences of life without parole.

With that in mind, let’s look at the trends.

Criminal sentences, on the whole, are down from last year.

Pennsylvania judges imposed 131,002 sentences for criminal charges in 2018 — a 4 percent dip from the previous year and a 13-year low, according to historical data included in the report.

Brett Bucklen, an analyst with the Pennsylvania Department of Corrections, said the trend is the result of falling crime rates in Pennsylvania. He also attributed some of the reduction to a 2012 state Supreme Court decision overturning mandatory minimum sentences for drug offenses.

Almost half of those sentences required defendants to spend some time incarcerated.

Twelve percent of sentences landed defendants in state prison, and 30 percent carried prison terms in county jails. Both of those rates have held relatively steady over the past five years, historical data show.

The most serious charges — including homicide, sex offenses, and other violent crimes — carry state prison terms. Violating Pennsylvania’s state firearms laws is a good way to land in state prison, too — half of the sentences for those convictions carried state prison terms, according to the report. 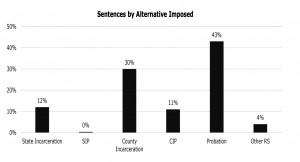 Judges in Pennsylvania can also divert offenders out of jail. Some of the alternatives they have include probation, which accounted for 43 percent of sentences in 2018, and county intermediate punishment. Those programs for drug and alcohol-addicted defendants accounted for 12 percent of all sentences.

Only a tiny, tiny fraction of offenders are tried by a jury of their peers.

Nearly all criminal cases in Pennsylvania are settled by plea deal. These agreements that require defendants to admit to their charges with a guilty plea in exchange for a lighter sentence.

These agreements account for 96 percent of sentences in Pennsylvania — a fact that Rep. Todd Stephens, R-Montgomery, said “validates” the work of police and other law enforcement officials across Pennsylvania.

“When you have 96 percent of people admitting that they’re guilty of a crime, that says the men and women out on the street are protecting Pennsylvania and doing a good job of focusing on people who have committed crimes,” Stephens, a former prosecutor, told the Capital-Star.

But Nyssa Taylor, a former public defender who now works as legal counsel for the American Civil Liberties Union of Pennsylvania, said the agreements don’t always work as they should.

Defendants facing multiple criminal charges might accept plea deals to get some charges dropped, even if it means taking a lengthy sentence, Taylor said.

What’s more, research shows that defendants are more likely to accept plea deals if they have to stay in jail while they wait to face trial.

That’s a common fate for people who can’t afford to pay bail, and can lead innocent people to accept plea agreements as a way to get out of jail faster, Taylor said.

Cash bail, explained: How it works and why criminal justice reformers want to get rid of it

It’s standard practice in federal and state-level sentencing for judges to show defendants some leniency if they take plea agreements, since they save courts time and money, Stephens said.

Based on the data in the Commission’s report, Taylor is skeptical that admissions of guilt bring any advantage to defendants.

“This is shocking to me,” Taylor said. “All of these people are taking plea deals, but what are they getting?”

There are alternatives to incarceration — but they remain vastly underused

Pennsylvania’s legislature created a program in 2005 that it hoped would divert people with drug addiction out of the prison system. Ever since, the State Intermediate Punishment (SIP) program has proven to be one of the best ways to reduce recidivism and help people get treatment for substance abuse.

But every year, Pennsylvania counties choose not to use it.

A program that keeps people with addiction out of prison is ‘extremely underused.’ A Senate bill could change that

Department of Corrections officials say that could change with some help from the Legislature.

“We have 67 counties with 67 District Attorneys, and what we hear regularly is that [this program] is really problematic for counties to use,” Woodside said.

A bill that the Senate passed this spring would make it easier for counties to sentence defendants to intermediate punishment programs.

But the legislation currently awaits a vote in the House Judiciary committee, where Corrections officials fear it could become entangled with controversial sentencing bills imposing mandatory minimum sentences for gun crimes — a proposal they say would increase incarceration.

Pennsylvania has one of the highest rates in the nation of people serving probation — a sentence that allows someone to live in their community under the supervision of a corrections agency.

People who serve probation pledge not to commit new crimes, and they agree to certain conditions so they can stay out of jail. If they violate those terms, a judge can revoke their probation and slap them with a new sentence.

Data from the Sentencing Commission show such revocations can carry heavy consequences in Pennsylvania.

More than 39,000 sentences in Pennsylvania last year were probation sentences, which carried an average term of 17.2 months.

More than 6,000 of those sentences were revoked 2018 because a probationer violated some terms of their supervision.

Eighty-three percent of the people who had their sentences revoked because they committed technical violations — minor infractions such as failing to show up for a meeting with a probation officer.

In contrast, only 22 percent of people on probation got in trouble for committing new crimes.

Not all probation violations are equally severe. But according to Taylor, any misstep can land a probationer with a jail sentence. Roughly half of the people who had probation sentences revoked got a new county jail sentence instead.

“Probation is functioning as a tripwire that’s sending people to state and county prison who shouldn’t be there,” Taylor said. “This is insane.”

Bills in the House and Senate would limit how much time someone can serve on probation and minimize punishments for technical violations.

Corrections officials investigated their own protocols this summer after inmates who were released from prison on parole were implicated in a string of homicides. The resulting report found no evidence of wrongdoing or negligence by the corrections officials who green-lit the releases.

But Stephens says more can be done to prevent similar episodes in the future.

“We need to have a better understanding of what happened there and what changes have been made or need to happen to prevent that from happening again,” Stephens said. “[Those murders] provide a stark reminder of what’s at stake if we act hastily.”

This post was updated on Dec. 16 to correct the number of probation sentences that were revoked in 2018, and to include additional information from the Commission on Sentencing about resentencing.

Criminal sentences are down in PA, and three more takeaways from an annual report