Philadelphia state Rep. Movita Johnson-Harrell will give up her seat in the state House of Representatives by the end of the month in the wake of embezzlement charges brought by Attorney General Josh Shapiro.

Elected just nine months ago, the West Philadelphia Democrat is accused of taking more than $500,000 from a nonprofit she founded to aid poor individuals suffering from addiction or mental or intellectual disabilities, Shapiro said during a Wednesday press conference in his Harrisburg office.

Shapiro said that Johnson-Harrell will plead guilty to the charges, including theft and perjury. But in a statement, Johnson-Harrell acknowledged her responsibility, even as she disputed some allegations.

Johnson-Harrell used the cash to pay her mortgage and car payments, as well as for vacations, and even to fund her two state House campaigns, Shapiro alleged.

“Defrauding a nonprofit, defrauding taxpayers, and then systematically lying to cover it up, is unjust, unfair, and it is a crime,” Shapiro, a fellow Democrat, said at the press conference.

Brown resigned in late 2018 after being found guilty of bribery charges. Johnson-Harrell also ran, unsuccessfully, against Brown in 2016.

In a statement through her attorney’s office, Johnson-Harrell said she was “saddened and dismayed by the nature of the allegations brought against me today [Wednesday].”

But, she added, “I vigorously dispute many of these allegations, which generally pertain to before I took office and I intend to accept responsibility for any actions that were inappropriate,” Johnson-Harrell said. “I have always fought for the people of West Philadelphia to the best of my ability and will continue to do so.”

She also signaled that she would step down by the end of December, but did not give a date.

Jessica Natali, an attorney for Johnson-Harrell, added that the legal team will not address specifics of the case in the media, and instead the case “will be resolved with the attorney general’s office and ultimate disposition will be addressed in a courtroom at an appropriate time.”

Johnson-Harrell started her nonprofit in 2006, and served as director and sole executive. The goal was to aid people with disabilities or those suffering from addiction.

The investigation began in 2018, before Johnson-Harrell was elected, and covered transactions dating back to at least 2013.

That year, according to an affidavit supporting the charges, Johnson-Harrell began writing rent checks from MECA to herself for a piece of property on Powelton Avenue in West Philadelphia, that would be used as a personal care home. The checks matched her mortgage payment.

MECA shut down the Powelton Avenue facilities in 2018, according to Shapiro, which led to the investigation. This followed reports from the Department of Human Service that declared residents were living in “squalor,” according to the charging documents.

The mortgage payments from the nonprofit to Johnson-Harrell continued — $3,345 a month — even after the facility closed.

A Porsche, a vacation and the electric bill

Besides the mortgage payments, an affidavit alleges that Johnson-Harrell transferred money from her nonprofit to her personal bank account  to pay for everything from trips to Acapulco, Mexico and Orlando, Fla., car payments for a Porsche, overdue utility bills, back taxes, and her grandchildren’s private school tuition.

But the transferred funds weren’t just put to personal use. They also funded political work, it’s been alleged.

In Johnson-Harrell’s unsuccessful 2016 run against Brown, she allegedly illegally used nearly $17,000 in MECA’s money on her political run, according to charging documents. That includes direct contributions and paying off campaign expenses.

In 2019 campaign, she used another $27,500 of her nonprofit’s money on her successful special election race, according to the affidavit. It also alleges that another $14,000 in unreported campaign dollars were spent on her run earlier this year, but that money did not come from MECA.

According to Shapiro, she is the 60th public official to be charged with crimes since he took office in 2017.

The first Muslim woman to serve in the General Assembly, Johnson-Harrell became known in her short term in office as a loud voice against gun violence, which House Minority Leader Frank Dermody, D-Allegheny, said in a statement.

In addition to her nonprofit, Johnson-Harrell also runs a foundation named after her son Charles, who was shot and killed in 2011.

Despite her commitment to her district, Dermody said it was “disappointing to see this chapter in public service cut short.” He added that “the fact is those elected to serve have to follow the law before they can make the law.”

The charges, Dermody continued, are “beyond disturbing,” and said he expected her to “resign very soon. She obviously cannot continue serving in elected office.”

Johnson-Harrell was also at the center of controversy when she first came to Harrisburg.

Before her swearing in, a newly elected Rep. Stephanie Borowicz, R-Clinton, offered a rambling prayer to open session that praised President Donald Trump and Israel while citing the name of Jesus over a dozen times. Johnson-Harrell called the prayer Islamaphobic at the time.

Shapiro said that Johnson-Harrell is likely facing jail time. As part of the charges, MECA’s leadership will be overhauled, and Johnson-Harrell will be removed from her positions.

Johnson-Harrell’s eventual resignation will require yet another special election in the district, which would be the second of the term. 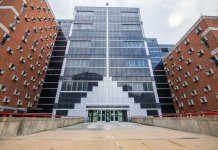 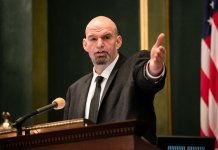 Commutation applications put on indefinite hold, as reformers press for action amid pandemic

‘It never should have closed’: In Erie, residents take tentative, first...