Pennsylvania’s 136 death row inmates will no longer be held in solitary confinement, and will instead house them in the same manner as the general prison population, under the terms of a court settlement announced Monday.

The settlement, between the American Civil Liberties Union, the state branch of the ACLU, the Abolitionist Law Center and the Pennsylvania Department of Corrections, was part of a class-action lawsuit claiming the decision to hold capital inmates in solitary confinement violated constitutional prohibitions on cruel and unusual punishment.

“The use of long-term solitary confinement on anyone is torture,” Amy Fettig, deputy director of the National Prison Project, said in a statement. “The conditions Pennsylvania’s DOC was subjecting people on death row to — spending their entire lives in a tiny, filthy cell without any normal human contact, congregate religious services, sufficient access to exercise, sunshine, the outdoors, or environmental and intellectual stimulation — weren’t just deeply unconstitutional; they were horribly inhumane.”

According to the settlement agreement, the Corrections department will still house condemned inmates in specific prisons. But the agency has agreed to offer capital inmates “the rights and privileges afforded to people in other state facilities.”

“This settlement brings Pennsylvania out of the penological dark ages and makes it a national leader in treating all incarcerated persons humanely,” ACLU-PA Legal Director Witold Walczak said. “We are grateful that [Gov. Tom] Wolf and [Corrections Secretary John] Wetzel have agreed to stop using permanent solitary confinement and to adopt humane policies to govern Pennsylvania’s capital units.”

In a statement, Corrections Department spokeswoman Susan McNaughton said the settlement agreement announced Monday “formally memorializes” reforms that the agency has been making over the last several years.

“However, within the capital case units, inmates’ routines are now similar to general population inmates, only confined to their specialized unit,” she continued. “Capital case inmates also have more access to phone calls, contact visits as opposed to non-contact visits, more time out of their cells and are no longer escorted by staff as they move about the capital case housing units. They now eat their meals on the unit with others from their housing units, and they are able to exercise with other inmates. The proposed ACLU settlement agreement announced [Monday] formally memorializes many of the reforms that the Department of Corrections had already instituted.”

Pennsylvania currently has the 5th-largest death row population in the country. The state has not executed a condemned inmate since 1999 and has had a moratorium on executions in place since 2015 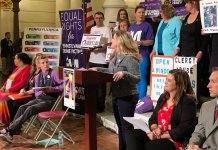 My story, my experience make me best suited to be Pa.’s victim advocate | Jennifer Storm