*This story was updated to accurately reflect remarks made by Geoff Moulton, administrator of the Administrative Office of Pennsylvania Courts.

All it took was a chaotic run-in with a bootleg CD vendor for police to arrest K. Robinson in a Philadelphia grocery store years ago. The incident didn’t result in a criminal conviction, but it still dogged the young entrepreneur and deterred her from seeking business loans and partnerships with community organizations.

That changed this year, when Robinson became one of the 1 million Pennsylvanians whose arrest and criminal records were automatically sealed under Pennsylvania’s Clean Slate Act – the first-in-the-nation measure that wipes arrest records after charges are dropped, and seals certain low-level misdemeanors and summary convictions after 10 years.

“Having my record cleared really gives me a lot more confidence,” Robinson said Tuesday, when advocates and criminal justice policy makers celebrated the one-year anniversary of the Clean Slate Act. Along with other people who had their records wiped, Robinson did not share her full name.

Since then, an automated computer program has sealed more than 35 million criminal cases in Pennsylvania’s online court system, hiding them from view of landlords, employers and members of the public. The cases have affected the criminal records of more than 1.1 million Pennsylvanians.

Proponents framed it as a way to boost employment and prevent recidivism among the three million Pennsylvanians who have criminal records.

“Without Clean Slate, a minor offense or just an arrest, a brush with the law, turns into a life sentence,” Gov. Tom Wolf said Tuesday. “And that’s a life sentence where we are going without the contributions that that person might have made to our economy, our society, or our families.”

Advocates hailed Clean Slate on Tuesday as a marvel of technical achievement, made possible by the statewide judicial record-keeping system that Pennsylvania has maintained since the 1980s.

Before Clean Slate took effect, anyone looking to have a criminal charge sealed had to hire a lawyer, apply for a pardon, and petition a judge to wipe it from public view.

*Automating the process stands to save time and improve efficiency in the state court system, where IT employees and administrators have spent more than 35,000 work hours over the last year getting the system off the ground, said Geoff Moulton, administrator of the Administrative Office of Pennsylvania Courts.

It’s also saved the 1.1 million people whose criminal records have changed the hassle and expense of hiring lawyers to guide them through the expungement process, and allowed criminal records to be sealed at a rate that would be impossible without technology. Since 2016, only 1,492 criminal records in Pennsylvania have been cleared by petitions, according to Vallas.

Pennsylvania’s program has spurred copycat bills across the country, including in North Carolina and Georgia, where legislators passed record sealing bills last week, according to Rebecca Vallas, senior fellow at the Center for American Progress.

Other measures have advanced in Michigan and been signed into law in Utah.

But advocates and lawmakers have still found shortcomings in Pennsylvania’s current law.

For starters, the state’s record sealing software doesn’t notify people when the courts make changes to their public criminal records.

The legislation also makes anyone with outstanding court fines or fees ineligible for expungement.

That means that half of the misdemeanor charges that qualify for Clean Slate in Pennsylvania are unable to be sealed, including 75 percent of eligible misdemeanors in Philadelphia, District Attorney Larry Krasner’s office found.

A bill sponsored by Rep. Sheryl Delozier, R-Cumberland, would amend the Clean Slate Act to make people with court debt eligible for sealing unless they owe restitution to a victim. Advocates say it’s a crucial change for thousands of Pennsylvanians whose old criminal records and arrests may pose an obstacle to employment.

But Rep. Jordan Harris, D-Philadelphia, Delozier’s co-sponsor on the original Clean Slate bill, wants to take the tweaks even further. He supports automatic expungement for felony records – specifically felony drug charges, which he called one of the “biggest impediments to folks getting employed.”

“[Clean Slate] is a great first step,” Harris said. “It moves us in the right direction … but we have a lot more work to do.” 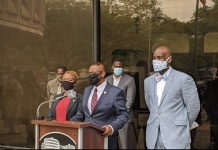 As gun violence surges, Philly officials tell parents to take responsibility for firearms in their homes