Correction: An earlier version of this article misstated the members of the task force.

On a call with journalists Monday, Gov. Tom Wolf said that 69 percent of race data is still unreported, despite state Health Secretary Dr. Rachel Levine’s earlier order for physicians and hospitals to report race data as it relates to COVID-19 cases.

Earlier this month, Wolf announced the creation of the COVID-19 Response Task Force for Health Disparity to address how COVID-19 affects Pennsylvania’s minority populations, but, so far, unreported race data threatens its progress.

Wolf also said that “little to no data” has been reported on ethnicity.

“One of the problems we have is that we have heard how COVID-19 is hitting minority populations – in particular African-Americans – hardest across the United States and anecdotally in Pennsylvania,” Wolf said, “but we lack the statistics needed to determine the severity of this issue here.”

According to the American Civil Liberties Union of Pennsylvania, one-third of cases reported in Allegheny County did not have race/ethnicity data available.

Reginald Shuford, executive director of the ACLU of Pennsylvania called the lack of data reported by counties “unacceptable.”

In a letter to Wolf and Levine, Shuford said, “Because of the lack of this data in Pennsylvania, it is difficult to fully understand COVID-19’s impact on Black and brown Pennsylvanians.”

While Wolf couldn’t say why healthcare systems aren’t proactively reporting race and ethnicity data to state officials, he urged medical facilities and healthcare providers to follow the Department of Health’s mandate to report that data.

“We need to get more medical professionals collecting and reporting race data about their patients,” Wolf said, adding that increased access to testing for the state’s vulnerable population is critical to fighting COVID-19.

“We also need to make sure our vulnerable populations have equal access to testing,” Wolf said. “By identifying issues, like testing locations and hours of operation, and providing information on these locations to our minority communities, we can make sure testing is accessible to everyone. … And we need to make sure testing is available to everyone, regardless of means, previous medical care, or existing relationships to a physician. This will help us identify difficult-to-detect cases.”

Led by Lt. Gov. John Fetterman, the task force is reaching out to community leaders across the state to compile feedback, ideas and comments on the issue with the goal of making recommendations to Wolf on addressing the long-and-short-term effects of the COVID-19 pandemic.

“We know of instances in Pennsylvania where major COVID-19 outbreaks have occurred in vulnerable communities, including ones where people do not speak English,” Wolf said in a statement. “We’re working to improve our data collection so we can get a better statistical understanding of how the virus has affected different groups of people.”

Also on the task force are:

From the Lt. Gov’s Office:

The task force has had three meetings so far, Fetterman said, and will continue to meet until the pandemic is over.

Biden is trying to have it both ways on fracking. That could cost him in Pa. | Mark O’Keefe 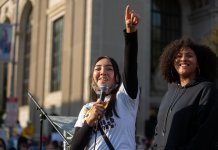 How the COVID economy is crushing Pa.’s student borrowers | Wednesday...

Biden is trying to have it both ways on fracking. That...