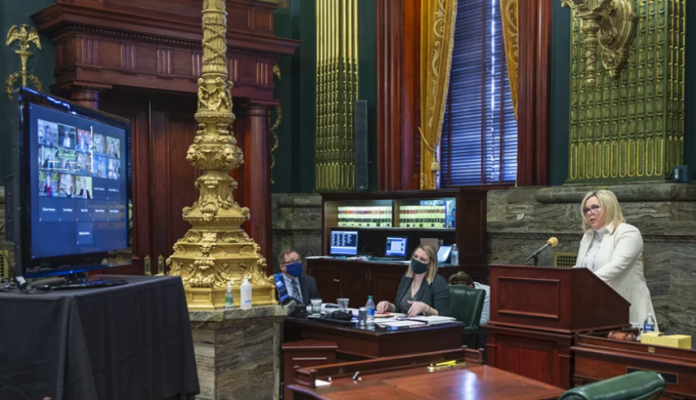 Pennsylvania lawmakers may have quickly split on party lines Wednesday when Gov. Tom Wolf unveiled an ambitious budget proposal. But they unified barely a day later as they grilled state officials on the state’s faltering COVID-19 vaccine distribution.

“There are an incredible amount of frustrations here,” Sen. Maria Collett, D-Montgomery, said Thursday, directing questions to newly appointed Acting Health Secretary Allison Beam. “What is the plan, moving forward, to do better?”

State senators pressed administration officials and vaccine providers for nearly four hours Thursday, asking them to explain why Pennsylvania is falling behind other states in administering doses of the COVID-19 vaccine.

The state is currently ranked 47 among 59 states and U.S. territories for the number of vaccine doses it’s administered relative to its population, federal data show.

The Wolf administration’s vaccine rollout has drawn heightened scrutiny from lawmakers of both parties in recent weeks. Legislators have called for the state to make more vaccine data public and moved to involve the state’s National Guard in the distribution.

House lawmakers questioned Beam during a three-hour panel Wednesday, one day before the Senate Health and Human Services and Aging and Youth committees took their turn.

Senators expressed some sympathy Thursday for Beam, acknowledging that she stepped into her job barely a week ago. She was nominated by Gov. Tom Wolf to replace former Health Secretary Dr. Rachel Levine, who was tapped for a role in the Biden administration.

But they also made clear their frustration as they demanded to know what the state is doing to ensure the vaccines are getting to the right people as quickly as possible.

Here are three takeaways from the panel.

State says it’s a challenge to balance convenience and efficiency

Pennsylvanians seeking a COVID-19 vaccine can go to one of more than 1,000 providers to choose from to get their shot.

Beam said Thursday that the state wanted to partner with providers statewide so patients wouldn’t have to travel far to get vaccines. But the vaccine partners that may be most convenient for patients, she said, aren’t necessarily the most efficient at administering shots.

Both of the federally approved COVID-19 vaccines require two doses to be administered weeks apart to achieve maximum effectiveness.

Beam said that some pharmacies are setting aside doses for patients who have received their first shot, so they can ensure the two-dose sequence. That’s despite the state telling providers that they don’t need to manage their supply that way, since they’ll account for the partially vaccinated patients in future dose allocations.

Beam said the Department of Health is conducting an internal review to see “whether we need to tighten up the facilities that are receiving vaccines.”

If the agency does decide to shift more of its supply to high-performing providers, patients may have to travel farther to get a vaccine. But Beam said that would be a temporary trade off until supply ramps up.

“Right now, we’re at a time where demand means that folks are driving an hour” to get vaccinated, Beam said. “We’re probably not going to be there in three to four months. And that’s when convenience will be of utmost importance.”

Pennsylvania is still in the earliest stage of its vaccine rollout, where vaccines are only available to healthcare workers, nursing home residents, elderly people and those with high-risk health conditions.

State lawmakers expressed concern on Thursday that Pennsylvanians who aren’t yet eligible for vaccines were getting them anyway.

Collet said she was “deeply disturbed” by a report of a healthy, middle-age constituent in her district receiving a vaccine, despite having no underlying health conditions that would make him eligible to get it.

If state officials are going to give more doses to the providers who prove efficient in administering them, they also ought to hold those providers accountable for who they vaccinate, Collett said.

Vaccine providers who addressed the panel, however, said it can be difficult to evaluate someone’s eligibility. They can verify someone’s age to make sure they’re 65 or older, which makes them eligible for a vaccine under the state’s current criteria.

Some patients might bring in physician notes to justify they have an underlying health condition. Otherwise, providers have to hope patients are being truthful when they say they qualify for a vaccine.

“We are not in a position to be evaluating … whether or not a patient has a chronic disease,” Bretton Walberg, the owner of Walberg Family Pharmacies, said, citing federal privacy laws that safeguard patient information.

Mass vaccination sites on the way?

Lawmakers had ample criticism for the Department of Health and its pharmacy partners on Thursday. But they did offer praise to one vaccine operation in the Lehigh Valley, which they hope could be a model for a more efficient distribution network statewide.

Dr. Bob Murphy, Chief Physician Executive at the Lehigh Valley Health Network, testified that his hospital system is able to administer 25,000 vaccines per week at its hospitals. A mass vaccination clinic it established on the grounds of an amusement park delivered 1,000 vaccinations in a single day.

Murphy told lawmakers that “the goal should be to exhaust the weekly supply as quickly as possible” – a strategy that contrasted with the one pharmacy providers described Thursday, when they told lawmakers they try to administer their seven-day vaccine allocation over the course of a week.

Sen. Scott Martin, R-Lancaster, said the mass clinic model “is probably going to lead us to the best success.”

In a statement after the panel concluded, Health and Human Services Committee Chairwoman Michele Brooks, R-Crawford, said she would press for more large-scale vaccination clinics.

‘What is the plan?’ Senate panel airs frustrations with vaccine rollout