WASHINGTON, DC – FEBRUARY 26: U.S. President Donald Trump speaks at the beginning of a new conference with members of the coronavirus task force, including Vice President Mike Pence in the Brady Press Briefing Room at the White House February 26, 2020 in Washington, DC. Trump updated the American people about what his administration’s ‘whole of government’ response to the global coronavirus outbreak. (Photo by Tasos Katopodis/Getty Images)

“We will begin our quarantine and recovery process immediately. We will get through this TOGETHER!” Trump tweeted.

Late Thursday, Bloomberg News had reported that Hope Hicks, a close aide to Trump, had tested positive for the virus. Hicks had traveled to and from the presidential debate in Cleveland on Air Force One with Trump and also traveled to Minnesota with him, Bloomberg said.

Trump has repeatedly questioned the efficacy of wearing a face mask and other safety precautions, contradicting top health officials in his administration, and is rarely seen wearing one as he presides over large rallies packed with maskless attendees.

At Tuesday’s debate, Trump said he wears one when he “needs to,” and derided Biden for routinely wearing a face covering. He has insisted that his approach is fine because those close to him are tested every day.

Pennsylvania’s congressional delegation took to Twitter to wish the Trump’s a speedy recovery.

“Jill and I send our thoughts to President Trump and First Lady Melania Trump for a swift recovery,” Biden tweeted. “We will continue to pray for the health and safety of the president and his family.”

House Speaker Nancy Pelosi, D-Calif., said Friday morning that she was praying for the president and his family, adding that she hoped the “tragic” situation would prompt “a transition to a saner approach” to minimizing the risk of infection.

“Maybe now that people who see the president of the United States with all the protection that he has, and the First Lady, still having this exposure, it might be … a learning experience,” Pelosi said during an interview on MSNBC. “But more than learning, it has to be something that’s acted upon.”

Pelosi said she was tested Friday out of “an abundance of caution,” but did not have the result yet. Her only contact with White House officials in recent days was negotiating over another coronavirus relief package with Treasury Secretary Steve Mnuchin, who announced he had a negative test Friday morning.

A memo from Dr. Sean P. Conley, the president’s physician, said he received information on Thursday night that the president, who at 74 would be at high risk for complications from the virus, and Melania had tested positive for COVID-19.

“The President and First Lady are both well at this time, and they plan to remain at home within the White House during their convalescence,” Conley wrote.

“The White House medical team and I will maintain a vigilant watch, and I appreciate the support provided by some of our country’s greatest medical professionals and institutions,” he said. “Rest assured I expect the President to continue carrying out his duties without disruption while recovering, and I will keep you updated on any future developments.”

On social media Friday morning, members of Congress from both parties reacted to Trump’s diagnosis, wishing him a quick recovery.

“My best wishes to @realDonaldTrump and @FLOTUS for a speedy recovery from COVID-19,” said U.S. Rep. Brendan Boyle, D-Pa. “Far too many families have had to suffer because of this virus.”

“Our family is praying for the entire First Family today as President @realDonaldTrump and First Lady @FLOTUS recover and heal,” said U.S. Rep. Brian Fitzpatrick, R-Pa. “We are hopeful in your full and fast recovery and we will continue to pray for you as you get through this together.”

Sen. Tim Kaine (D-Va.), who also tested positive for coronavirus antibodies, said in a statement that the virus needs to be taken seriously and proper measures such as wearing a mask and washing hands should be followed.

“I wish the President and First Lady a speedy recovery,” he said. “Having had COVID-19, let me stress: all need to take this seriously.”

The president’s positive test result comes days after he and Biden met for their first debate. The two men did not shake hands and stayed on opposite sides of the stage, which was in a large atrium on Case Western Reserve University’s campus.

Official safety precautions for that event, co-hosted by the Cleveland Clinic, largely focused on the audience, which was much smaller than usual for a presidential debate. The roughly 80 audience seats were spaced out from each other, and those seated had to test negative for coronavirus. Those in the audience could be seen wearing masks, with the exception of Trump’s family members and top aides.

A White House spokeswoman tweeted Friday morning that Trump’s daughter, Ivanka Trump, and her husband, Jared Kushner, who were both in the debate audience, tested negative Friday morning. 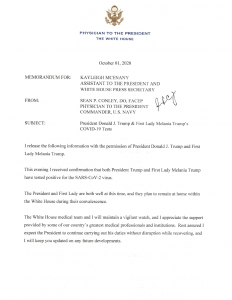 Laura Olson covers the nation's capital as a senior reporter for States Newsroom, a network of nonprofit outlets that includes Pennsylvania Capital-Star. Her areas of coverage include politics and policy, lobbying, elections, and campaign finance.

Ariana covers the nation's capital for States Newsroom. Her areas of coverage include politics and policy, lobbying, elections and campaign finance.

As the Washington Bureau Chief of States Newsroom, Jane directs national coverage, managing staff and freelance reporters in the nation’s capital and assigning and editing state-specific daily and enterprise stories. Jane is a veteran of more than three decades in journalism.