Even in the best of times, experts say that Pennsylvania’s child welfare system is fraught with high worker turnover and shoddy record keeping, making it difficult to rescue children from dangerous households.

But the COVID-19 pandemic, which has convulsed the national labor market and confined entire families to their homes, has introduced a whole new set of dangers to children trapped in abusive families.

“We may not lose children to COVID-19 … but they could well die from the abuse and neglect that results from the [pandemic],” said Marsy Hamilton, executive director of Child USA, an advocacy organization and think-tank at the University of Pennsylvania.

What’s more, the risks of spreading COVID-19 — coupled with the restrictions that public officials have put in place to contain it — are preventing social workers from entering homes to investigate abuse claims, they said.

But she thinks the risks facing children could be even greater today. The COVID-19 pandemic has coupled economic stress with social isolation, Hamilton said, separating children from the adults who can help them escape dangerous households.

The statewide shutdowns of schools and daycares means that millions of Pennsylvania children are no longer seeing mandated reporters — the school employees, coaches and child care providers who are required, under state law, to relay child abuse concerns to authorities.

In Pennsylvania and elsewhere, school employees are the leading source of child abuse tips. Teachers, classroom aides and other school staff lodged more than 13,000 tips with the state’s child abuse hotline in 2019, according to a report by Pennsylvania’s Human Services Department.

As the COVID-19 pandemic upended education across the country, millions of teachers and students have pivoted to online learning platforms.

Hamilton noted that the mass migration to digital learning could put children at greater risk of sexual exploitation online.

Sarah Font, a Penn State sociology and social work professor, said online instruction can also shield abusive guardians, since the signs of child abuse “are difficult to detect from afar.”

Font said child helplines will likely field fewer calls now that children are no longer face-to-face with the adults who most often report abuse.

But “once kids are back in school or daycare … we’re going to see a reasonable spike in new abuse reports,” said Font, who authored a January report on child sexual abuse and exploitation in Pennsylvania.

Font said child protective agencies will need to closely monitor the kids who are known to be in high-risk households, especially as economic strain and disruptions in social services stand to exacerbate family tensions in the coming weeks and months.

But social workers say that COVID-19 pandemic has made it nearly impossible for them to thoroughly investigate cases of child abuse, or to assist parents that are trying to regain custody of their children after having run-ins with the law.

State and federal guidelines for social distancing — which call on individuals to maintain six feet of distance from one another and minimize unnecessary social interactions — give parents and guardians a compelling pretext to close investigators out of their homes, Hamilton said.

A social worker named J. in south-central Pennsylvania, who requested anonymity to speak candidly about her working conditions, said her coworkers have largely stopped performing home visits, which Font and others say are essential to investigating abuse claims.

The social workers have tried to make do with phone calls and video check-ins, which they know are a poor substitute for face-to-face interaction.

“It’s hard to get people to trust you and be vulnerable when they can’t look you in the eye,” J. said. “It’s not the same as being in the same physical space as someone. It’s not as enriching.”

Child advocates and social workers are calling on state lawmakers to make personal protective gear, such as masks and gloves, available to child welfare investigators.

Catanese said some counties have yet to provide hand sanitizer to workers who need to conduct home visits and welfare checks, even though many counties have deemed these workers essential employees.

“It’s a hell of a thing to go out and work right now and not have the [safety equipment] the federal government says you need,” Catanese said Wednesday.

J., the social worker, said that human service agencies need to provide all the equipment necessary to make their field workers feel safe on the job. They should also distribute equipment technology to high-risk families, she said, so that social workers can maintain some degree of communication during the shutdowns.

She and Hamilton also agree that school districts need to use the few opportunities they have to to monitor at-risk households. Since schools are still providing free meals to some children, districts could enlist school bus drivers and guidance counselors to deliver meals to their homes, they said.

But beyond that, they said, child welfare agencies have few good options but to sit and wait for the pandemic to run its course.

“We’re facing the perfect storm,” J. said. “A lot of workers are being told not to see people, but they are waiting for the next bad thing to happen … It makes me really nervous to think about how families and kids are going to psychologically rebound from this.” 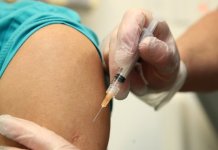 ‘The perfect storm:’ How COVID-19 has multiplied the risk for children in abusive households

Illinois is ending cash bail. Does it have the blueprint for...