PHILADELPHIA — With classes brought to a halt by the COVID-19 pandemic, college and university students across Pennsylvania have found their lives disrupted in a variety of ways.

Temple University’s Klein School of Media and Communication Professor, Dr. Abbe Depretis, believes that the Temple administration is doing the best they can when transitioning courses online.

“Online learning has influenced my teaching style in the sense of checking in with students a lot more. My courses this semester are seminar style and discussion-based, so my teaching style hasn’t had to change much” Depretis told the Capital-Star.

But, he said, students’ success in that setting is largely up to them.

In Buttigieg’s candidacy, Pa.’s young LGBTQ voters saw themselves – and a way forward

“I feel as though I should receive some of my tuition back because the University is not living up to its end of the deal providing a high-quality education” Smith said.

Temple University has postponed its spring commencement ceremony. Like other graduating seniors, Smith said he was disheartened that his family won’t be able to see him pick up his diploma.

The pandemic has also impacted Smith’s career plans.  A Maryland television station that had offered him a reporting job “rescinded my contract offer. Now I’m left without a potential job and a market that all but shut its doors to new hires” Smith said.

“I’ve never been one to worry for the future. But now, I already have an underlying anxiety disorder and the fact that this virus has no end in sight and the job market has halted makes me nervous,” he said.

Brittany Keyes, a Penn State sophomore majoring in psychological neuroscience, also said she’s found it harder to pay attention, and to complete her work, now that she’s not in a physical classroom setting.

“Penn State was very supportive during the transition, some professors more than others,” Keyes said.

The required laboratory class for her major, which normally requires a physical setting, has been impacted most.

Keyes told the Capital-Star that students were given a written form of the lab and had to watch videos of someone doing the experiment. They’ve also been provided with hypothetical measurements and a fake lab partner data to complete questions.

A teaching assistant, appearing on the online meeting platform, Zoom, is on hand for the entire lab period to answer questions, she said.

“My psychology professor has been stressing mental health and even has Netflix parties for us on Fridays. Most professors have hinted at the fact that they do not want their class to be an extra source of stress during this time”

The extracurricular activities Keyes was looking forward to this semester were also canceled. Some including her club dance team showcase and the Penn State football Blue and White Game.

Meanwhile, Janelle Burger, a math teacher at Central Dauphin High School outside Harrisburg, said her district has done its best to keep students in the loop.

“Our district is not one-to-one, and we are trying to figure out a way to best provide and appropriate education to all students.” Her students have described their time out of school being scary, crazy, and boring, she said.

Like many working parents, Burger said she’s also found herself balancing the demands of career and family while working from home.

“For example, I have utilized Zoom to meet with my Pre-Calculus classes and my daughter Ava made an appearance on screen saying, “Hi Mommy’s class”. It’s nice being home with my own kids, but I miss my students and our routine.” She also states that the possibility of not being able to say goodbye to seniors in person or see them walk across the stage at graduation is heartbreaking.

Central Dauphin senior Madison Clare told the Capital-Star she was upset that many of her “lasts” could be taken away because of the pandemic.

“If we end up not going back to school this year, me and all of the other seniors would miss out on so much, including our last prom, the last times cheering for our school in sports, our last walk in the halls, the last lunch at the table filled with our friends, and lastly, our final goodbyes,” Clare said.

“I wish us seniors could go back and get a chance to experience all of our ‘lasts,'” she said, “but things like this do happen. And this one wasn’t in our favor.”

Michala Butler, of Harrisburg, is a sophomore at Temple University. Her work appears frequently in the Capital-Star. 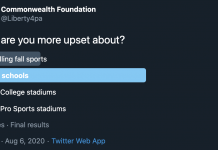