PHILADELPHIA — A person living with AIDS in Philadelphia was recently turned away for a COVID-19 vaccine, and he is urging the city to include people with HIV/AIDS in the current phase of vaccine distribution.

“I’ve survived AIDS for 30 years and I definitely don’t want to die now from COVID,” said “Richard Doe,” who requested anonymity due to the sensitive nature of his health status. “I don’t understand why the city appears to be so resistant to doing the right thing.”

In Pennsylvania, people living with HIV are currently eligible for a COVID-19 vaccine. However, this is not the case in Philadelphia, which has separate vaccine guidelines from the rest of the state.

The Centers for Disease Control and Prevention note that people with HIV and low CD4 cell counts — along with people with untreated HIV — are at an increased risk for a severe case of COVID-19, should they become infected. But CDC guidelines, which the city of Philadelphia is following, don’t mandate prioritization of vaccinations for people with HIV/AIDS.

On Feb. 13, Doe signed up for a vaccine with Walgreens Pharmacy located at 1800 South Street using the Walgreens app. He received a vaccine appointment for Feb. 16. But later on Feb. 13, a Walgreens pharmacist called Doe and said the appointment was cancelled because the city instructed Walgreens to only vaccinate people 75 and older, Doe said.

Doe, 59, has been unable to make an appointment with another vaccine provider in the city, he said.

Philadelphia Health Commissioner Thomas A. Farley was asked about the issue during a Feb. 16 press conference. “My understanding — and I’ll need to double check —  is that people who have immune deficiency due to HIV infection, so, full-blown AIDS, are eligible as high-risk criteria defined by the CDC,” Farley told the Philadelphia Gay News. “But people who have HIV infection and have a normal immune system because they’re under treatment — and most people with HIV infection are — they would not be [eligible] now. Now, I would say being eligible [in the current phase] doesn’t mean you’re gonna get a dose right now. There are hundreds of thousands of people [eligible in the current phase]. I don’t know the particulars of that individual person. But even if they’re eligible, it may be that they might have had difficulty getting vaccine like many others.”

In a follow-up email on Feb. 19, a health department spokesperson said: “Dr. Farley acknowledges he made a mistake on Tuesday in using an outdated phrase, ‘full blown,’ referencing AIDS, the condition caused by HIV, that is no longer recognized as sensitive and falls short of our commitment to science-based language. While inadvertent, it was wrong, and we apologize for any harm or discomfort this caused.  Our team is currently reviewing recommendations for people living with HIV. Our list didn’t originally include them because they aren’t included on the CDC Phase 1b list. The number of PLWH who would qualify likely is low because of a healthy immune system. The majority of PLWH have a normal life expectancy if they get on treatment, stay on treatment, and achieve and maintain an undetectable viral load. These modern treatments also make them unable to transmit HIV to sex partners.”

The city currently has a vaccine interest form where people who wish to receive the vaccine can submit their information. The person would then be contacted when they become eligible and an appointment becomes available. However, due to the demand, not all eligible individuals will be able to schedule appointments right away.

Asked about the possibility of prioritizing people with HIV/AIDS, the health department spokesperson said: “The Vaccine Advisory Committee discussed this topic last week and is considering how to implement the guidance from CDC on the topic. We understand the sensitivity of this situation and want to make sure that people who are at a higher risk, like those who have detectable viral loads, can get access. This is an evolving situation, and we expect to have clarity on it soon.”

Dr. Mark Watkins, a staff physician at Mazzoni Center, said HIV-positive individuals should be eligible for a COVID-19 vaccine in the city’s current distribution phase. “I strongly feel that people with HIV should have already been included,” Watkins told PGN. “Not everyone with HIV does have full immune reconstitution and they, therefore, are still going to be vulnerable to complications of COVID.”

Jane Shull, executive director of Philadelphia FIGHT, also expressed concern about the city’s guidelines. “We are concerned about the city’s guidelines because there is a growing body of scientific evidence that people with HIV — and especially those with a CD4 nadir of 200 or below — are more vulnerable to complications of COVID-19,” Shull said, in an email. “What this means is that even if a person is doing well now, if they had a period of time when their CD4 count was below 200, they are still vulnerable.”

“It raises some concerns,” Green told the Philadelphia Gay News. “I understand the challenge that Dr. Farley is dealing with. He’s dealing with a limited supply of vaccine. But I think there has to be some additional understanding. At the very least, someone with AIDS should be eligible for a vaccine. I’d also advocate for people with HIV to be included, as they are elsewhere in the state. I would consider those individuals to have a high-risk medical condition similar to the other conditions that are allowed in [the current phase].”

“It’s a disgrace,” Squilla told the Philadelphia Gay News. “It makes you wonder who is making these guidelines. If someone who has HIV isn’t considered immunocompromised, who is? I understand they have a shortage of vaccines. But people with HIV/AIDS should be part of the current distribution. Just add it as one of the immunocompromised states. It’s not that hard. It’s not rocket science.”

Regarding the situation Doe encountered at Walgreens, the spokesperson said: “Eligibility for ShopRite, Walgreens and Rite Aid pharmacies is [for] people over 75 who live in Philadelphia. We are inviting people over 75 who have registered for our vaccine interest database [to be vaccinated]. Invites have been going out to people who have submitted their interest form to the database. If you are over the age of 75 and haven’t yet [been vaccinated], you can seek vaccination at those pharmacies or sign up with our interest database and you will get an invite from us. We are asking that people under the age of 75, please do not try and get vaccinated at these pharmacies. You will be able to later. We want to reserve these slots for people over the age of 75.”

Walgreens issued this statement: “While Philadelphia has several eligibility criteria to receive a vaccine, at this time we’ve been directed by City of Philadelphia officials to only administer vaccines to patients 75 and older. In this fluid situation, where eligibility varies significantly by area per federal, state and local directions, we are working to ensure these eligibility restrictions are reflected in our scheduler as soon as possible.” 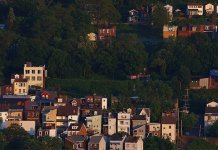 Pittsburgh passed an eviction moratorium. Now its pols are quarreling over who gets credit | Analysis

Unlike rest of Pa., Philly residents with HIV/AIDS aren’t eligible for COVID-19 vaccine