Pennsylvania was among a minority of states last week that was claiming a measured victory over COVID-19, watching its rate of new cases slope downward as the virus surged in other parts of the nation.

But that trajectory appears to have changed this week.

Pennsylvania health officials confirmed 600 new cases of COVID-19 statewide on Friday, capping off a seven-day stretch that saw case counts trend upward for the first time in June – a reversal that health officials are attributing to expanded testing in nursing homes and to sustained community spread statewide.

Even though case counts have increased, Department of Health data show that the state has not seen a commensurate uptick in hospital admissions or ventilator usage.

The number of new cases is also far lower than what Pennsylvania saw on April 11, when the state logged a record-high of nearly 2,000 positive tests in a single day, and is dwarfed by case counts in the South and Southwest, where governors are implementing new shutdowns as the virus rips through their states.

Nonetheless, Pennsylvania’s figures in recent days have put it among nearly three dozen states currently seeing increases in new COVID-19 cases, according to data analyzed by Covid Exit Strategy, a site run by a coalition of public health institutes and experts.

That’s what’s driving the spike in new cases in York County, where 90 percent of cases that were diagnosed in a single day earlier this week were nursing home residents, according to the York Dispatch.

But Wardle said health officials also continue to see community spread in virtually every county that has seen an increase in new cases. Twenty-one counties currently fit that criteria, including York, Allegheny, Westmoreland and Lehigh, according to data analyzed by the investigative news site Spotlight PA.

He said health officials do not believe that the protests Pennsylvania saw in the wake of George Floyd’s death led to the increase in cases.

Federal guidelines call for states to begin reopening only if they have seen new COVID-19 cases decline for 14 consecutive days.

While Gov. Wolf has said that counties could move back in Pennsylvania’s three-stage reopening plan if they see outbreaks, Wardle did not indicate Friday that the state move any county out of the “green phase.”

He said Pennsylvania remains a “model for the country on how to reopen effectively,” and that Pennsylvanians could prevent new cases by wearing masks in public and practicing social distancing.

Spotlight PA data show that case counts are declining in only 12 counties. Thirty-four counties have not seen any statistical change in their case counts, but that can be enough in some cases to give officials pause in reopening.

Health officials in Philadelphia, for instance, said Friday that they might tap the brakes on the city’s reopening, which is currently scheduled for July 3. New case rates there began to stagnate this week after declining for nearly a month.

Public health experts have warned that progress against COVID-19 can be tenuous, and that communities could see new cases if people work or socialize in close quarters indoors.

“We do expect to see small increases when we ease restrictions, but as long as folks follow the disease prevention guidance, that increase should stay small,” Dr. Krys Johnson, a professor of epidemiology and biostatistics at Temple University, told the Capital-Star. “If it does increase sharply, that’s an indication that we need to revert to a more restrictive phase of social distancing.”

Dr. Kristin Sznajder, an epidemiologist at Penn State Hershey Medical Center, said last week that people could reduce the risk of transmission by socializing outdoors, wearing masks and keeping six feet away from others, especially inside.

“We’re not out of the woods,” Sznajder told the Capital-Star. “Just because we’re going green doesn’t mean we should all go to crowded places right now.” 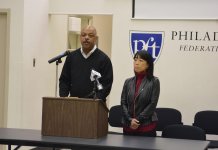