As a kid growing up in Erie, Justin Elchynski would pick up rocks to see what was under them. He’d explore the region around his house in search of different critters and creatures.

For as long as he can remember, Elchynski has been interested in reptiles and amphibians.

That interest led him to a degree in biology from Lock Haven and now a job at the Electric City Aquarium and Reptile Den in Scranton.

The facility, which opened at the Marketplace at Steamtown in downtown Scranton two years ago, has been closed since mid-March because of the COVID-19 pandemic. While the aquarium might not have any customers, the workers remain busy.

They have a hungry crowd in the aquarium’s sharks, alligators, fish, crocodiles and snakes, all of whom have to be fed regularly. Some have to be fed daily. Others are fed every other day.

According to Elchynski, the schedule for him — and his colleagues —   has remained fairly routine.

“Aside from the facemasks – as far as work goes – we’re still pretty similar,” he said.

They spend most of their days working on animal care.

They clean each habitat every day. They feed the animals on the same schedule as normal. The aquarium has even been doing some live streams. But the main difference is not having shows for the customers.

When it was open, the aquarium had a reputation for being packed to the gills on the weekends.

At the National Aviary in Pittsburgh, the staff have missed having visitors come and interact with the birds, but the birds are doing just fine, said Dr. Pilar Fish, the Aviary’s Senior Director of Zoological Advancements and Avian Medicine.

Staff at the Aviary were wearing masks and practicing social distancing while Allegheny County was in the red, and then yellow phases of reopening, and are preparing to reopen to visitors on July 1 now that the county is in the green phase.

During the lockdown, essential Aviary staff split into teams to reduce the number of people on site at once, while ensuring the animals got the same level of care they are used to. But the birds took it all in stride.

“The birds have been behaving naturally,” Fish said. “There’s been a lot of activity going on, courting and nesting, so the birds have really kept to their routines.”

Owls are doing well, flamingos are pretty chill, and the condors are behaving as normal, according to Fish.

The only drama among the population at the Aviary was concern for the health of star penguin Dottie, who suffered from a lung ailment for several months. She’s now recovered and was recently returned to the Aviary’s Penguin Point to be reunited with her companion penguin Stanley.

During normal times, the aquarium has several daily shows for customers to attend. They can see some animals up close, and even pet a few.

There are a few limitations because of the pandemic.

Elchynski explained that some supplies for specific animals are limited. It can take a bit longer to come in.

Elchynski works with the reptiles. His favorite is the king cobra.

“They’re very intelligent,” he said. “She has a nice disposition.”

Getting to know the animals is a great job perk, but the work includes a lot of responsibilities that people don’t often see.

“They think you just get to play with the animals all day,” Elchynski said.

But his normal shift includes a lot of habitat cleaning. He has to follow the correct safety protocals?. Some of the animals are dangerous, so workers have to take those protocols seriously.

The staff is also working on some new things for customers when the aquarium reopens.

“We’re looking to bring new stuff in, so when people come back it is a new experience as well,” Elchynski said.

He wouldn’t get into specifics about what changes are coming. He also admitted he didn’t know when the aquarium would reopen. It will follow the government’s guidelines.

The staff’s concern will remain the safety of customers and animals.

Learning about and caring for them is second nature for Elchynski at this point.

“I’ve been keeping them and going looking for them since I was little,” he said. 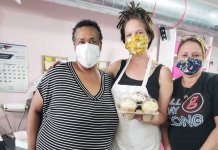 Feeding the beasts: How a Pa. aquarium and an aviary weathered the COVID-19 crisis