Dr. Deborah Birx, who heads a White House coronavirus working group, told reporters in Harrisburg that Pennsylvania health officials “in the March and April time frame, worked really diligently, and Pennsylvanians worked together, to decrease the number of cases.”

She added that that diligence continued over the summer when cases spiked again, particularly in Pittsburgh and Allegheny County.

Wolf has been second-guessed and pressured by local and legislative Republicans for much of the last six months for his actions to fight and contain the coronavirus.

Republicans and industry allies have attacked the Democratic administration’s July decision to restrict indoor restaurant occupancy to 25 percent of normal capacity. Take-out and outdoor dining can continue with fewer to no restrictions.

Restrictions on restaurants vary from state-to-state. Neighboring Maryland is at 50 percent occupancy, while Ohio only requires a minimum of six feet between tables.

Meanwhile, Texas, a Sun Belt state hit hard by the virus over the summer, closed bars not serving food, but those rules were loosened last week.

All these restrictions, Birx said, are at least partially inspired by modeling by the Children’s Hospital of Pennsylvania.

The medical center found that 25 percent restaurant occupancy, a mask mandate, and closed bars, among other restrictions, produced similar results to a shelter-in-place order to restrict the spread of COVID-19.

“I imagine it’s what every mayor and governor is looking at,” Birx said of the same modeling. “And I really want to applaud that group because they really helped us” to “take new ideas into the field.”

CHOP’s model was also used when Wolf announced on July 15 that restaurants would  be limited to 25 percent capacity, and that bars not selling food must close. An expert from the hospital was on hand to back up Wolf’s actions.

‘We are already at a tipping point,’ Wolf says, as Pa. imposes new health restrictions on bars and restaurants

These restrictions on indoor dining, nightlife and private gatherings as well as continued mask use were needed to keep cases low, Birx said, until the development of a vaccine.

“You can’t keep locking down America,” she added.

The CDC told state leaders that vaccines may be available for healthcare workers and other groups by November, the New York Times reported this week.

Vaccines undergo three stages of clinical trials before they’re approved and licensed by the Food and Drug Administration – a process that typically takes years.

At a seperate press conference Thursday, state Health Secretary Dr. Rachel Levine said that she and other state health officials are working to ready distribution logistics.

But she said the group would prefer to see a vaccine complete all three phases of clinical trials before it’s administered to the public.

“Our expectation would be that the vaccine has completed its safety and effectiveness trials,” Levine said.

Until then, Birx continued to advise caution. She asked for Pennsylvanians to not gather in crowds of more than 10 at backyard barbecues over the Labor Day weekend and for people to continue to wear a mask.

She also encouraged college students who had been gathering without masks to not go home to their parents.

On Thursday, the state saw its biggest one day spike in cases in more than a month, with 1,160 new cases. So far, more than 7,700 Pennsylvanians have died in the pandemic. 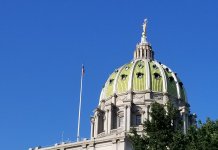