PITTSBURGH — An alliance of elected officials and other organizations led by the Coalition to Abolish Death By Incarceration, a statewide advocacy group for individuals in lockup, is calling for the “decarceration” of the Allegheny County Jail in light of the COVID-19 virus.

While drastic steps have been taken to slow the spread of the virus by closing schools, banning large gatherings and asking nonessential employees in all professions to work from home, CADBI said that nothing has been done to help Allegheny County Jail inmates.

“These measures do not take into account one of the most vulnerable, highly concentrated populations: the county’s jail population, composed of over 2,300 individuals packed into tight quarters and often lacking basic hygiene,” according to a statement released by the group.

“Additionally, prevalence of health conditions that increase vulnerability to COVID-19 — including tuberculosis, asthma, HIV, hypertension, diabetes, heart conditions—are all significantly higher among the jail and prison populations. To make matters worse, the jail’s medical capacity isn’t nearly high enough to deal with a potential outbreak within the jail; it is woefully understaffed to deal with the medical needs of incarcerated individuals as is. Many individuals will likely need to be transported to and from the hospital, further increasing the likelihood of exposure and transmission,” the statement reads.

“Look, I don’t think the jail provides adequate healthcare in normal times,” Brett Grote, of the Abolitionist Law Center told the Pittsburgh Current on Monday. The risk of a COVID-19 outbreak dramatically exacerbates those problems.

“There are people constantly cycling in and out of there, most of whom don’t need to be there. If the jail continues to operate at normal or even 50 to 75 percent of normal capacity, it will become an incubator for COVID-19.”

It’s a fact that there is sometimes an alarming lack of empathy, close-minded as it may be, from the general public when it comes to incarcerated individuals. But it’s hard to argue that Allegheny County Jail inmates should remain locked up with little chance to avoid contracting a potentially deadly virus should it breach the prison’s walls.

According to Cabdi, 81 percent of individuals at the ACJ have not been convicted of any crime or offense, and “the rest are serving relatively short sentences.” Moreso, there is a large population turnover at the county jail and employees, law enforcement officers, attorneys and visitors come to the facility daily.

“Over 100 individuals pass through intake on a daily basis. The result is that many individuals will enter an environment where the risk of contracting COVID-19 is relatively high, and simultaneously many individuals will also be leaving and potentially spreading the illness to others,” according to the release. “This high turnover also increases the likelihood that staff at the jail will contract and spread the disease. All of these factors converge to create the perfect storm for a potential COVID-19 outbreak to spread quickly amongst the incarcerated population.

“Emergency efforts to decarcerate the jail are more crucial now than ever. Doing so will decrease the likelihood of COVID-19 spreading amongst the ACJ population and staff and subsequently throughout the region. It will also make it more manageable for the jail to provide adequate medical care to those affected.”

Among the signers to the letter are Allegheny County Councilors Olivia Bennett, Bethany Hallam, the ACLU of Pennsylvania and Casa San Jose.

“It’s time for us all to act: The local courts, the District Attorney, the Public Defender, everyone,” Hallam said Monday morning. “We’ve forbidden groups of more than 50 people in one place in the city, but the Allegheny County Jail has over 2,400 people in a small space, especially intake.”

On Monday, Allegheny County announced two new cases of COVID-19 had been confirmed. One of the individuals is in their 60s and one is in their 50s. Both are isolated at home.

According to the county health department, that brings the total number of cases to six with “many others pending.” On Sunday, Allegheny County Chief Executive Rich Fitzgerald asked all nonessential businesses to close for at least the next 14 days.

In the U.S., some jurisdictions are trying to be proactive. In Cleveland, officials this morning released 300 inmates, in an attempt to stop the virus’ spread, from the Cuyahoga County Justice Center to reduce the risk of COVID-19 in the jail.”

WOIO-19 in Cleveland reported Justice Brendan Sheehan saying last week: “If it hits us and the jail, it will cripple our criminal justice system,” and with a population of “about 1,900 … there won’t be enough room to quarantine the infected inmates.”

Because 81 percent of individuals at the Allegheny County Jail have not been convicted of a crime, there is a high turnover rate at the jail.

Over 100 individuals pass through intake on a daily basis. The result is that many individuals will enter an environment where the risk of contracting COVID-19 is relatively high, and simultaneously many individuals will also be leaving and potentially spreading the illness to others. This high turnover also increases the likelihood that staff at the jail will contract and spread the disease.

According to CABDI, San Francisco County’s public defender is asking for the release of pre-trial inmates who are “highly susceptible” to the virus. In that situation, the county’s district attorney said his office won’t oppose these motions for inmates “not deemed a threat to public safety” and to strongly consider sentences of time served in plea deals.

“We are calling on the county executive, county council, and all of county government and administration; judges, prosecutors, and public defenders; police, parole and probation officers to all unite on emergency decarceration initiatives to halt the rapid spread of COVID-19 in Allegheny County,” CABDI wrote. 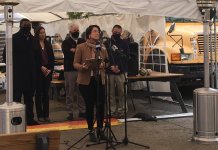