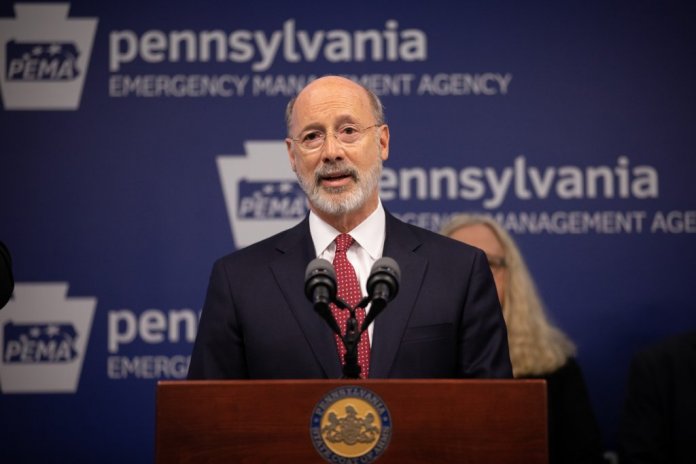 Bars, dine-in restaurants, retail outlets and daycare centers across Pennsylvania are being asked to close their doors starting at midnight on Monday, March 16, part of an unprecedented statewide shutdown that Gov. Tom Wolf hopes will slow the spread of the COVID-19.

Medical centers, pharmacies, grocery stores and gas stations are expected to remain open during the shutdown, which Wolf expects to last at least two weeks.

“We will lift the mitigation efforts as soon as possible, but we need to limit as many physical contacts as we can to prevent the spread of COVID-19,” a somber Wolf said Monday, when he appeared at a 2 p.m. virtual press conference with administration officials. “And we need to work together to do this — each and every one of us.”

Pennsylvania’s Department of Health has identified 76 cases of COVID to date, many of them clustered in the Philadelphia metropolitan area in the southeastern corner of the state.

Wolf already ordered all of Pennsylvania’s K-12 schools to close for at least two weeks starting on Monday. Late last week, the administration ordered the shutdown down of retail and entertainment venues in suburban Philadelphia and in Allegheny County, where eight cases have been identified to date.

The state Supreme Court on Monday issued an emergency declaration that will allow county courts to restrict or close their court proceedings through April 14, according to a press release issued by Administrative Office of Pennsylvania Courts.

Philly closes all courts, and non-essential businesses and gov’t offices

Wolf stressed on Monday that his directive is self-enforced, and that he would not call on the Pennsylvania National Guard or law enforcement to police business districts and downtown shopping malls.

But he urged Pennsylvanians to stay in their homes as much as possible in the coming weeks to minimize their chances of catching or transmitting the virus.

“We need to take this disease seriously, so please, stay home.” Wolf said Monday. “The fewer contacts you make, the less likely you are to get the disease, and the fewer people you will spread it to.”

The broad directive is sure to deal a blow to Pennsylvania workers as the restaurant, retail and entertainment industries grind to a near halt.

Wolf’s order will allow restaurants to offer take-out options, but calls for a moratorium on dine-in eating and drinking.

Wolf said Monday that his administration is working to secure Pennsylvania’s share of funding from the federal Small Business Administration, which announced on March 12 that it would open disaster assistance loans for small businesses affected by the COVID-19 outbreak.

Wolf stressed that the federal money would provide the bulk of any assistance to Pennsylvania’s small businesses. But he also said his administration spoke with Pennsylvania’s legislative leaders on Monday to identify state-level funding sources, such as the Capital Financing Authority, to help mom-and-pop businesses and their employees.

The Pennsylvania Department of Labor and Industry announced Monday that workers may be eligible for unemployment compensation benefits if their employers cut their hours or cease operations due to the COVID-19 outbreak.

The Pennsylvania Public Utility Commission has also prohibited utility providers from shutting off gas, electric, water and telephone services until Wolf lifts the emergency declaration he issued on March 6.

In the absence of state and federal demographic data, Pa.’s LGBTQ community conducts its own research