More and more LGBT community centers are holding vaccine clinics to get shots into the arms of people in marginalized communities. The Bradbury-Sullivan LGBT Community Center in Allentown was the first non-healthcare provider to hold such a clinic, the center’s executive director, Adrian Shanker, said.

“There’s only a couple of the LGBT healthcare providers in the state, so there’s still huge gaps,” he told the Philadelphia Gay News. “It’s really critical that we can offer COVID-19 vaccination in trusted spaces like here in the Lehigh Valley at Bradbury-Sullivan LGBT Community Center or in Philadelphia at places like William Way, or Mazzoni or Philly FIGHT. It really is critical that more of this work can happen around Pennsylvania.”

“We know already that this place is a safe haven for us to go in times of stress whenever that is, so it’s really important for me as a member of the LGBTQ community to participate and to go to a place like Bradbury-Sullivan,” said community member Will Morris. “I do not think I would have the experience I had anywhere else.”

LGBT community centers often provide comfort for queer individuals seeking to be vaccinated in trusted environments, by trustworthy individuals. A fair amount of trans and nonbinary people received vaccines at Bradbury-Sullivan Center, Shanker said, many of whom communicated to staff that they felt more at ease getting vaccinated at an LGBT community center than a public health establishment.

Shanker said reasons included “dealing with [things] like needing to put your legal name down on a website to schedule because that’s what’s attached to someone’s electronic health record. We have to use the same forms, but people trust us.”

Those seeking a vaccine from Bradbury-Sullivan Center sign up via phone. “If we need to have their legal name, which we do, we’re also making a note of their chosen name so they’re referred to [as such] when they arrive,” Shanker added.

For Nat Kenyon, development intern at Bradbury-Sullivan Center, getting vaccinated at an LGBT center that he knows and trusts was meaningful to him. “It definitely increases the comfort and accessibility,” Kenyon said. “I myself am trans, and there’s always that doubt in medical practitioners, or there is for a lot of people at least. You don’t always know if they’re competent, you don’t always know what to expect, whether to bring up if you’re trans. Walking into the LGBT center, you know you’re going to be treated with respect and kindness no matter what.”

Although the vaccine is now available to all Pennsylvanians 16 and up, the state was in an earlier phase of vaccine eligibility when Bradbury-Sullivan Center began its vaccination efforts, when people had to communicate why they qualified to be inoculated. For people living with HIV, disclosing their status in a semi public space at a mainstream clinic would not have been ideal, Shanker pointed out. Bradbury-Sullivan Center staff carried out that part of the registration process over the phone to maintain people’s privacy.

Not only is it vital for LGBTQ people, people of color, and other minority communities to be able to get vaccinated in a trusted, culturally-competent space, it is equally important that they have reasonably easy access to the vaccine. In Pennsylvania and across the U.S., virtually no data exists on LGBTQ communities’ ability to access the vaccine, in part because the state and the CDC do not include sexual orientation or gender in their vaccination tracking efforts, Shanker said.

“There’s a gap in knowledge and information,” he added. “But certainly we know that a majority of people coming to the center based on our intake data are LGBTQ. We also know that we have approximately 5% higher than the state average of BIPOC (Black and indigenous people of color) community members receiving their vaccine with us.”

Shanker emphasized the need to be intentional about making vaccine accessibility a priority for minority communities, including queer and trans people, those living with HIV, BIPOC people, folks with disabilities and intersections thereof.

“There’s a variety of reasons why people may be less able to receive the vaccine elsewhere, part hesitance and part physical access issues, and in part just a lack of trust,” Shanker said. “We’re trying to resolve these issues as best as we can with the limited vaccines we’re able to offer.”

Just being able to receive the vaccine proved an emotional experience for some people, Shanker said. “That’s how I felt when I received it,” he continued. “I physically have been at the vaccine clinics that we’ve had at the center, and people are really grateful and thankful that the science existed to make that vaccine possible, and grateful for the sacrifices of so many healthcare workers over the past year. There are a lot of emotions behind being able to get to that moment.” 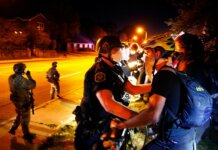