The current issue of Harper’s Magazine poses a startling question on its cover: Do we need the Constitution?

The magazine’s editors convened a distinguished panel of experts to discuss the question. The conclusion was even more startling. Their unanimous answer was that we need another Constitution, a better one, a more democratic one, a more responsive one, a product of a new constitutional convention, and so forth.

The question is startling because the Constitution we now have is doing a pretty good job.

In President Donald Trump, we have a chief executive plainly tempted to silence his enemies, prosecute his opponents, fire the chair of the Federal Reserve and ban immigration based on religion, among other things. He has been restrained in these actions in large part because of actual or threatened judicial opposition based on the Constitution.

Plus, the fundamental accomplishment of the Constitution — the peaceful transfer of power — is extremely likely to hold, should Trump lose the 2020 election.

These are not minor accomplishments. They are what a Constitution is for.

Of course, Trump has come very close to the line. The Justice Department’s failed opposition to the AT&T/Time Warner merger may have been politically motivated, for example.

And U.S. Education Secretary Betsy DeVos’s order to Duke University and the University of North Carolina at Chapel Hill to present a more positive image of Judaism and Christianity in their shared curriculum is really frightening.

But so far, the Constitution has held up.

So, why this dissatisfaction with the Constitution, on the political left? Why does University of Miami Law Professor Mary Anne Franks assert in the article that “every word of the Constitution—starting from this premise of ‘We the people’ —is a lie”?

Nationalism is atheism. America was born of a grander vision | Bruce Ledewitz

This dissatisfaction is not just with the Constitution. As the conservative author Andrew Sullivan noted in New York magazine, the opening statement of the New York Times’ “1619 Project” called the American founding a lie –“Our democracy’s ideals were false when they were written.”

It goes on to say that “Black Americans have fought to make them true.”

Slavery, not universal human rights, was the foundation of America. Racism is what the history of America is about.

An influential part of the left has lost faith in America. For them, America is a false front not only for racism, but for misogyny, colonialism and other evils as well. Whether the claim is in the name of “We the people” or proclaims that “All men are created equal,” it’s all lies.

This is a very different understanding than that of the Rev. Martin Luther King, Jr., when he said in his “I Have A Dream” speech at the Washington monument in 1963, “In a sense we’ve come to our nation’s capital to cash a check.”

The contents of the uncashed check were the promises made in the Declaration of Independence and the Constitution of freedom and democracy for all. These promises were not lies, but were commitments that America had not lived up to. That would have to change. And, in many ways, it has.

The difference between an unfulfilled promise and a lie is sometimes very small. In law, a failed commitment to pay money in the future can either be innocent or fraudulent. It depends on the intention of the person at the time of making the statement.

But in political life, the difference between an unfulfilled promise and a lie is foundational.

For Dr. King, the arc of the moral universe is long, but it bends toward justice. The ideals of the Constitution and the Declaration of Independence are real and they have weight in history When these ideals are invoked, the subjective good faith of the person speaking is not the measure.

Truth is the measure. America made a promise whether its leaders were sincere or not. The power of that promise can even lead to the conversion of those initially opposed to it.

Here is the core change in American politics.

Today, there are many Americans on the left and right alike who no longer have faith in the power of truth. There is no sense in either the Harper’s Magazine story or the New York Times 1619 Project of hope in history.

Nor is there much hope today anywhere in American public life.

Prior generations of Americans would have looked at our history and noted the progress that has been made toward inclusion and universalism. They would instinctively have seen the arc of history bending toward justice.  That is why Dr. King could so confidently invoke promises that had been so often broken. They would not be broken forever.

But for the authors of the 1619 Project and the participants in the Constitution article, history is just the play of antagonistic forces. We are always having to struggle with our enemies. Evil is always present. There is no progress.

The current state of American politics, its division, anger and fatalism, reflects the view that public life is only struggle and is not the vindication of truth.

We have a choice to make. Actually a commitment. The shape of history is not an empirical question. It is impervious to data. It is a matter of faith. We can stand with Dr. King or we can endorse skepticism. We can participate in the movement of history or we can struggle endlessly in a sea of chaos.

The future of American politics depends on our decision. 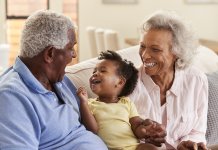 CDC: It’s OK for vaccinated grandparents to visit family if no risk for severe disease

CDC: It’s OK for vaccinated grandparents to visit family if no...