Republicans romped in the statewide judicial races. That’s a wake-up call for 2022

An hour or so after the polls closed on Tuesday night, I pulled up the Department of State’s elections returns website to check in on the race for Pennsylvania Supreme Court between Republican Kevin Brobson and Democrat Maria McLaughlin. 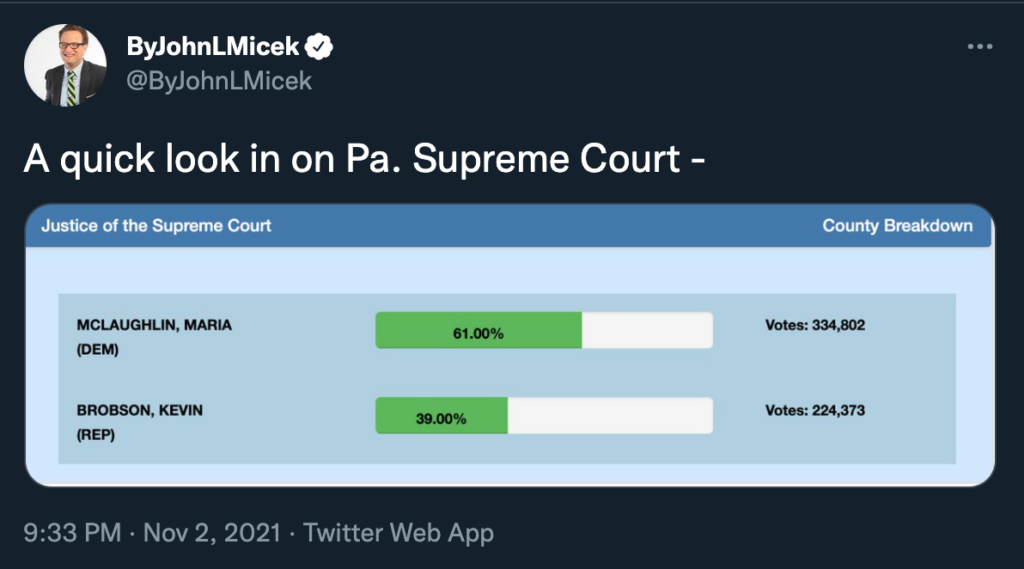 A couple of minutes later, Republican operative Ray Zaborney, who’s a veteran of more than a few campaigns, chimed in: “Yeah Kevin is going to win. GOP sweep tonight.”

Sure enough, over the course of the night, McLaughlin’s advantage evaporated, and by the time all was said and done, Brobson was on course for the win.

The victory will not materially impact the balance of power on the court, for now. But there was no doubt that Republicans had scored an important win in their longer-term quest to chip away at a progressive majority that’s proven vexing for the GOP these last five years.

As the Capital-Star’s Stephen Caruso reports, deep-pocketed donors fire-hosed money into the race, to the tune of about $7.7 million on election night, with even more likely to surface when all was said and done.

The results in the court races, which Republicans do indeed appear poised to sweep, are a reminder that, while money is certainly helpful, it’s still hard to overcome annoyed and motivated voters who are casting ballots in a bellwether campaign cycle.

That was buttressed by the numbers: A Franklin & Marshall College poll released last week showed President Joe Biden’s approval numbers taking a hit, with barely a third (32 percent) saying he was doing an excellent or good job, compared to 41 percent of respondents who said the same thing in August, and the 44 percent who answered that way in a June poll.

And with everything more expensive, notably the price of gas, the electorate is cranky (only 1 in 3 respondents to the F&M poll said they believed the state was “headed in the right direction.”).

Republicans, thus, were both cranky and motivated. In the near term, that’s bad news for Democrats who, presented with a dry run for a 2022 midterm cycle that could be truly cataclysmic, still underperformed in some key contests.

The good news is, that they appear to have at least recognized the signal voters were sending. At mid-afternoon Wednesday, Democratic state Attorney General Josh Shapiro, who, as you might have heard, is running for governor, sent out a cry for help — er, sorry — plea for cash. 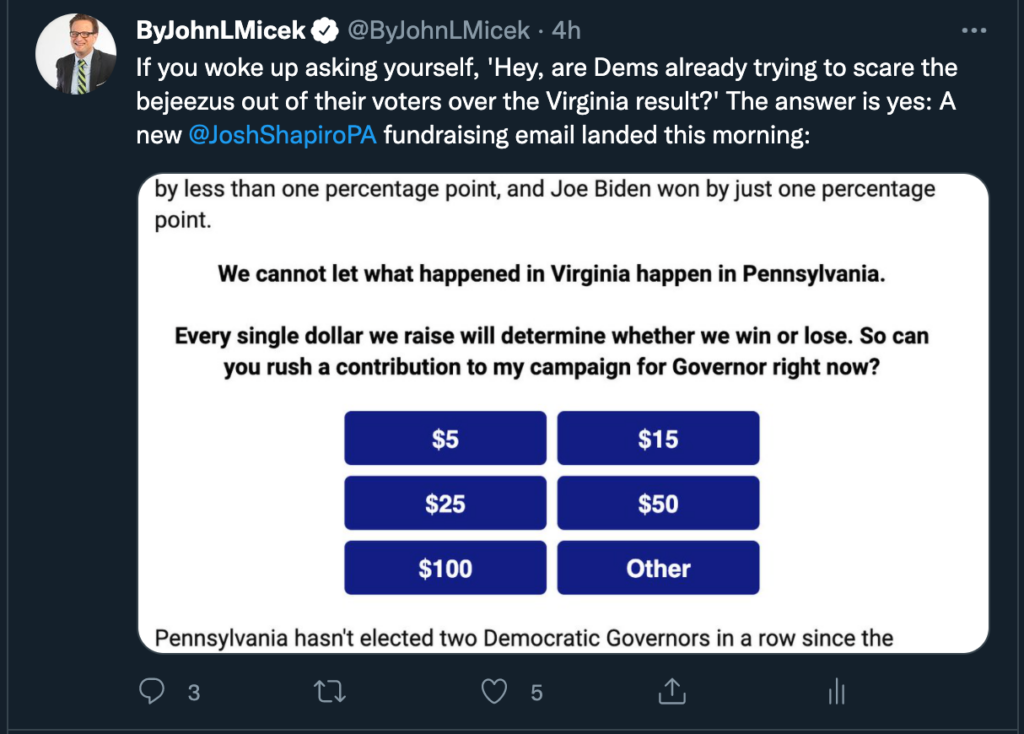 So, points for paying attention: But will the Democratic infrastructure — and their supporters — stay focused over the long haul? We’ll have to see on that one.

Certainly, the news was not 100 percent dire. There also were some encouraging signs of progress as well.

In heavily Black Harrisburg, City Council President Wanda Williams, who is Black, fended off a Republican, and a write-in challenge from incumbent Mayor Eric Papenfuse, who is white, to win the city’s top spot.

And in heavily Latino Lebanon, outside Harrisburg, city voters rejected a Hispanic aspirant for mayor, but did elect their first Latina magisterial district judge, Cassie Miller reported on Wednesday.

In all cases, these victories represent an important rebalancing of the scales, as an increasingly diverse electorate looked to elect leaders who look like them, and who reflect their priorities. There’s still an awfully long way to go, but it’s an encouraging step in the right direction.

Which brings us back to another set of bellwether races in counties that President Joe Biden flipped last year: The contests for county executive in Erie and Northampton counties.

In Erie, Democrat Tyler Titus, a current member of the Erie school board, lost to Republican Brenton Davis by 2,739 votes, the Capital-Star’s Marley Parish reported on Wednesday. Had they won, Titus would have become the first transgender individual elected the Erie’s highest post.

The two races are as different as they are geographically disparate. It’s always difficult — but not impossible — to unseat an incumbent, as was the case in Northampton County.

Which does not mean that Lynch is going quietly, he’s already pressing for an investigation of the race, writing, in a rambling Facebook message that, “The age of corruption will be coming to an end in Northampton County.

“They have no idea who they messed with!” he actually continued. “God’s people are just beginning this march! I am invigorated to eviscerate the swamp creatures in our county and their evil deeds …This administration and their minions miscalculated big time messing with me, my family, and We the People. Lions are now circling.”

In Erie, meanwhile, Titus and Davis were vying for an open seat (incumbent Democratic County Executive Kathy Dahlkemper opted against a re-election bid), making the race more competitive out of the gate.

Money poured into the election: On Sunday, as the race entered its final hours, GoErie reported that wealthy donors had pushed the race over the $1 million mark, with more than 40 percent of the money coming from just two donors.

A veteran Erie operative brushed aside the suggestion that Titus’ gender identity had played against them on a night when other diverse Democratic candidates had triumphed, arguing instead, that Davis had simply worked harder and was more motivated. And there are days when no amount of money in the world can overcome that.

Which brings us full circle to my opening observation: As they head into the all-the-marbles 2022 cycle, with the Governor’s Office and a U.S. Senate seat on the line, Democrats will have to overcome what appears to be an enthusiasm gap, and a provably narrower voter registration advantage.

And there’s only one way for that to happen: For Democrats to break up the circular firing squad that’s delaying approval of President Joe Biden’s domestic agenda (which they all like), and by getting out there and truly explaining to Pennsylvania voters how they’ll benefit from it.

The 2022 contests will be a street fight. Democrats need to start getting ready right now. Tuesday proved that Republicans are already hard at work there.

Cassie Miller maps out the county-by-county voter turnout on Tuesday night (it will be updated as more data become available).

Marley Parish rounds up the results in the fight for Erie County executive.

November is Native American Heritage Month in Pennsylvania and across the country. Our sibling site, the Arizona Mirror, explains what you can expect in the coming days.

The Centers for Disease Control and Prevention has signed off on giving Pfizer’s COVID-19 vaccine to all kids ages 5 to 11, a final decision that means those children were to start receiving shots as soon as Wednesday, Capital-Star Washington Reporter Laura Olson writes.

Voters in Allentown elected the city’s first Hispanic mayor, but rejected a ballot measure that would have scrapped language in the city charter designating English-only as the city’s official language, Correspondent Katherine Reinhard reports.

On our Commentary Page, opinion regular John A. Tures put his LaGrange College students to work: Can President Joe Biden rebound from bad polls and a bad election result in time for 2022? Opinion regular Ray E. Landis looks at the next big policy challenge: Safe and affordable housing for a graying nation. And in his first appearance, Aumary Abreu, of our partners. at Q’Hubo News, exhorts his Spanish-speaking audience to action on climate change.

Stabbings at a Philadelphia jail went unnoticed due to staff shortages, the Inquirer reports.

Pittsburgh’s Black residents have high hopes for incoming Mayor-elect Ed Gainey, who will be the city’s first Black chief executive, the Tribune-Review reports.

A decade on, survivors of sexual abuse at the hands of Jerry Sandusky are still in ‘recovery mode,’ PennLive reports.

LancasterOnline explains how the fight over mask mandates and critical race theory translated into record turnout for local school board races.

Local requests for vaccines for kids aged 5-11 are surging in Luzerne County, the Citizens’ Voice reports.

A lawsuit in Clearfield County could temporarily pause the construction of a large immigrant detention center, WITF-FM reports.

You Say It’s Your Birthday Dept
Best wishes go out this morning to reader Kristen Zellner, of Harrisburg, who celebrates today. Congratulations, and enjoy the day.

Heavy Rotation
Here’s one from Valley to get your Thursday morning rolling. It’s ‘Closer to the Picture.’