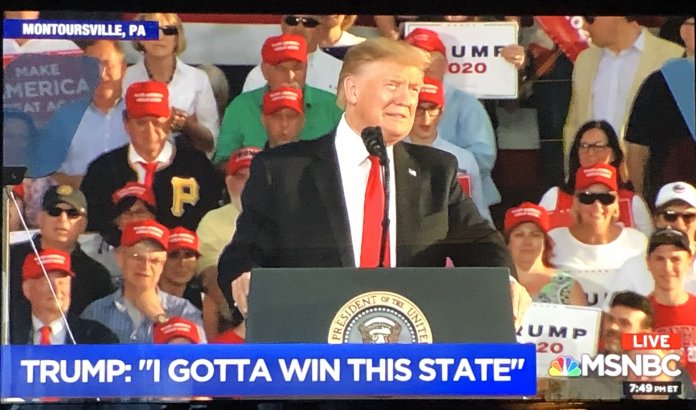 But Trump’s trip to northern Pennsylvania also was as much about securing the 45th president’s 2016 fortunes as it was about shoring up the chances for Republican hopeful Fred Keller.

With Air Force One as a backdrop, Trump told a crowd at Williamsport Regional Airport that he was wavering between the 2016 campaign slogan that put him in the White House (“Make America Great Again”) and one he trotted out on the campaign trail during last year’s midterm election (“Keep America Great Again“).

“It’s the cheapest poll in the world,” Trump said, as the crowd offered lukewarm applause between the two choices. The wavering cheers could be a metaphor for Trump’s own chances in a state he carried by barely a percentage point in 2016.

For a guy who’s all about brand, he should know better than to go messing with a successful formula (New Coke, anyone?). That only happens when there’s a fly in the special sauce. So with that in mind, here’s three things to think about in the wake of that presidential visit and what it could portend for 2020.

1. Was Trumpism an aberration?

Trump loves to spend time on the stump talking about his Pennsylvania win, the first Republican victory in Pennsylvania in a presidential year in three decades. But more than two years into his first term, there’s plenty of evidence to suggest that Trump’s win might have been more situational than it was evidence of any great partisan shift within the Keystone State electorate.

While more than seven in 10 Pennsylvanians are happy with the state’s economy, a Quinnipiac University poll released last week showed a clear majority of state voters (54 percent) disapproved of Trump’s job performance.

Last year’s midterm campaign showed that so-called Trump triers, particularly in southwestern Pennsylvania, could be lured back to the Democrats’ column by the right kind of Democrat. They got one in the form of U.S. Rep. Conor Lamb, a Second Amendment-supporting former Marine, who ran opposed Nancy Pelosi for House speaker, and who has spent most of his five months on Capitol Hill going out of his way to avoid any kind of controversy whatsoever.

And in northeastern Pennsylvania, where voters in Luzerne County went for Trump in 2016, resulting in them being studied with Jane Goodall-like intensity by all manner of pundits and political scientists for the last two years, a special election for a vacant state House seat saw mainline Democrat Bridget Malloy Kosierowski stomping Frank Scavo, a Trump-style Republican with a hankering for anti-Muslim social media posts, 62-38 percent.

So while it’s too soon to conclude that 2016 was a one-off (we still don’t know which of the roughly 5,147 Democrats seeking the nomination will win the party’s nod), the early signs strongly suggest that Trump is in for seriously tough sledding (witness the heavy presence on the ground by the White House’s campaign apparatus).

That Quinnipiac poll showed Trump trailing the former Veep 53-42 percent in a theoretical, head-to-head match up. In a stop in Philadelphia on Saturday, Biden positioned himself as the antidote to Trump’s politics of division, and as the Democrat best able to defeat Trump in 2020. Polling data suggests that Democrats want a candidate who can beat Trump above all else.

But Biden isn’t the only one. U.S. Sen. Bernie Sanders, I-Vt., leads Trump 50-43 percent in that Q-Poll. U.S. Sen. Elizabeth Warren, D-Mass., beats Trump by a within-the-margin 47-44 percent;  U.S. Sen. Kamala Harris, D-Calif, ties Trump at 45-45 percent, and South Bend, Ind. Mayor Pete Buttegieg leads Trump 45-44 percent. You have to get down to former Texas U.S. Rep. Beto O’Rourke before you find a Democrat losing to Trump, but even then by a margin-bothering 46-44 percent in Trump’s favor.

All of that goes a long way toward suggesting that Trump’s trip to Montoursville, likely to be the first of many before the polls close in November 2020, is about keeping his base engaged and energized — but not necessarily expanding it beyond the 48 percent he claimed in 2016. And he won’t be running against Hillary Clinton and Democrats won’t be taking the state for granted.

3. Women are angry … again.
Women voters both turned out at the polls, and as candidates, in force in 2016, helping Democrats to recapture the House. The major factor driving it: Trump’s conduct and what they justifiably saw as a Republican majority and White House hostile to the interests of 52 percent of the population.

Evangelicals who made a Faustian bargain with Trump in 2016, holding their collective noses at his personal failings in exchange for a conservative Supreme Court, may be energized by restrictive anti-abortion bills passed and signed into law in Alabama and elsewhere.

But so too are progressive women, who, joined by allies, will take part in a national day of action to protest those bills.

If Republicans were looking to gift-wrap an issue guaranteed to honk off and motivate voters in key suburbs, like those in Philadelphia who came out in the mid-terms in force last fall, it’s hard to imagine one more perfectly suited to the cause.

Republicans in the state Senate, where the GOP is hanging onto its majority by its fingernails, and where at least one southeastern moderate has been targeted for defeat, may well be sweating the down ballot effect of the culture war being waged at the national level.

And think about this: We’re still months away from Iowa and New Hampshire. It’s only going to get more interesting and dramatic from here.

Our Stuff:
Stephen Caruso bravely journeyed to Montoursville for the Trump show. He has this report.

Sarah Anne Hughes chatted with LG John Fetterman about his 67-county recreational marijuana listening tour, which has now wrapped up after 98 days.

Veteran journalist and activist Mark Segal, the founder and publisher of the Philly Gay News, reflected on the 50th anniversary of the Stonewall Riots during an appearance in Harrisburg on Monday.

On our Commentary Page, Carol Kuniholm of Fair Districts PA says a recent study about Pennsylvania’s livability points to the need to reform the General Assembly. Because there’s nothing that drives down property values like 253 underemployed layabouts.

And state Rep. Jennifer O’Mara, D-Delaware, says a generation of college students is being crushed under the boot of heavy student debt. She has some ideas how to fix it.

Elsewhere.
The Inquirer has its take on the Trump rally in Williamsport on Monday night.
Auditor General Eugene DePasquale has some questions for the Pittsburgh schools amid controversy over a Cuba trip, The Post-Gazette reports.
PennLive has your guide to voting during Tuesday’s primary elections.
Allentown’s former police chief has been fired from his job in Fort Worth, Texas, The Morning Call reports.

For those who don’t already know, here is my “birth” city where it all began: Pittsburgh! Featured by the WSJ as one of the top cities for college graduates, Pittsburgh is also home to championship sports teams (most recently the Penguins 2016/17 Stanley Cup winners), the Incline, and Primanti Brothers sandwiches. Also of interest: the city is currently undergoing a major revitalization while continuing to be far more affordable than its coastal counterparts. May | 2019 . . Who else recognizes the Andy Warhol Bridge? . . Photo credit: @honeybadger8771 . . . . #image_of_place #momentsofmine #seemycity #pittsburgh #theprettycities #places_wow #placestovisit #lonelyplanet #pennsylvania #cityscape #travelgram #travelanddestinations #neverstopexploring #stayandwander #steelcitygrammers #pittsburghpa #pittsburghbeautiful #igerspittsburgh #bestinpgh #postcardsfromtheworld #postcardplaces #ig_travel. #bestofpittsburgh #downtownpittsburgh #412project #412pics #theglobewanderer #capturedpgh #pittsburghinfocus #wpxi

WHYY-FM has your Philly voters’ guide to Tuesday’s primary election.
Politico has the story on Nancy Pelosi’s closed-door clash with House Dems over impeachment.

What Goes On.
Nothing – it’s Primary Day. Go vote already.

WolfWatch.
Gov. Tom Wolf starts his day with a 10:30 a.m. event in Horsham, Montgomery County, to talk water contamination. By afternoon, he’ll make the metaphoric trip from King’s Landing to Winterfell, heading to Jim Thorpe for a 2 p.m. event at the Glen Onoko Falls trail.

How the Capital-Star will cover the 2020 Election: What you need to know, how to help

Why Trump’s Pa. trip was really about the president’s favorite topic: Himself | Tuesday Morning Coffee