Who’s behind the ‘Don’t Blame Me. I voted for Wagner’ billboards? | Tuesday Morning Coffee

If you’ve been driving Interstate 83 in York County, or if you’ve found yourself in the eastbound lane of the Pennsylvania Turnpike, around the Lancaster/Lebanon interchange, the chances are good you’ve seen the billboard in the road’s shoulder, blaring: “Don’t blame me. I voted for Wagner.”

The billboard, which features a woman shrugging, also includes photographs of Gov. Tom Wolf and state Health Secretary Dr. Rachel Levine. The message, while unspoken, suggests a criticism of the Democratic administration’s management of the COVID-19 pandemic, which prompted the shutdown of hundreds of businesses across the state back in March.

While Wolf and Levine have come under fire from Republicans and the business community for their handling of the public health crisis that had claimed the lives of 7,018 Pennsylvanians as of midday Monday, public support for the Democratic administration has remained high.

But the big question: Who put up that billboard? It’s a mystery worthy of a socially distanced Sherlock Holmes.

Unlike most political advertising, the billboard doesn’t include the standard “Paid for By” disclaimer language. The hunt was on.

Brian Scott, the sales manager/general manager of Hanover, Pa.-based Trone Outdoor, which hosted the billboard, declined to name the critic behind the ad, saying that it was a “private citizen. They wish to remain anonymous.”

Scott was quick to point out that his firm is agnostic on matters of politics, saying the company had also sold space for a billboard in support of the Black Lives Matter movement.

“We stay neutral,” he said.

Carl DeFebo, a spokesperson for the Pennsylvania Turnpike Commission, said that despite what most people may think, billboards that appear along the toll road are on private, not commission, property, so the agency has no oversight of them.

Anyone know who's bankrolling this? https://t.co/tZ1ta2FgHv

Wagner, a former Republican state senator from York County who lost the 2018 governor’s race to Wolf by double-digits in 2018, did not return a call seeking comment. 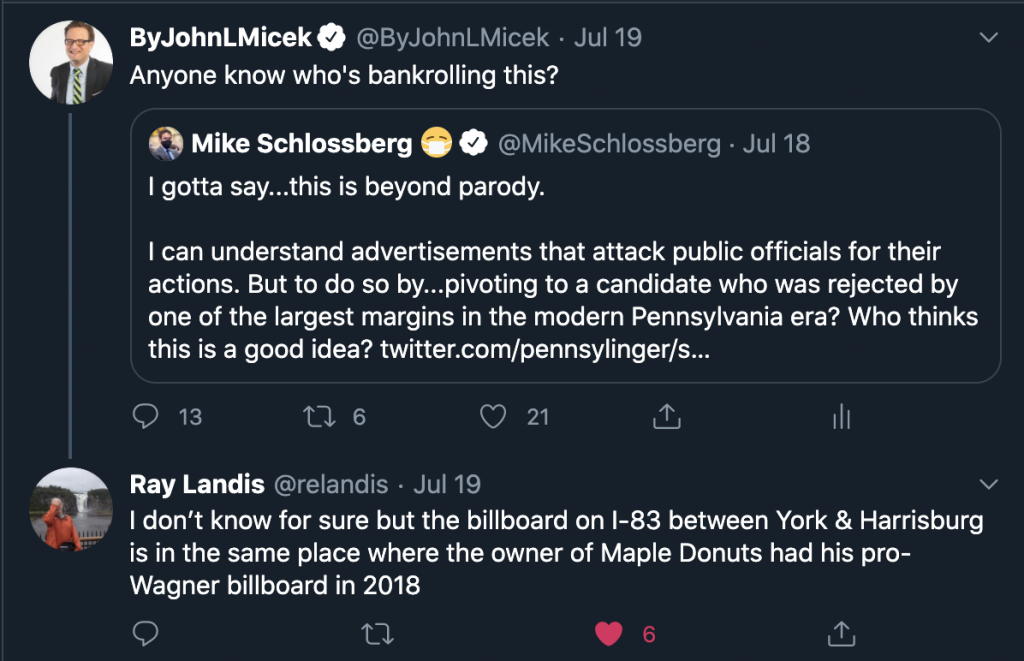 The south-central Pennsylvania doughnut chain’s owner, Charlie Burnside, has a long history of conservative political activism. In 2016, the company marketed a “Trump” doughnut. The firm also has a reputation for putting up controversial billboards, including one that read “Maple Donuts Takes a Stand, Not a Knee,” the York Daily Record reported.

Burnside also did not return a call seeking comment. But Burnside once told the YDR that “there’s no big thought process that goes into” his billboard campaigns, explaining that if a slogan made him laugh, he figured it would make others laugh.

Or, at least, prompt a reporter to make any number of phone calls to try to unravel a mystery, wrapped inside a cruller, tucked into a beignet, dusted with powdered sugar.

Our Stuff.
Monday was Pennsylvania Day. Cassie Miller explains the origins of a very strange holiday.

After less than a year on the job, Donavan West, the head of the African American Chamber of Commerce for Pa., N.J., and Delaware, has stepped down, our partners at the Philadelphia Tribune reports.

On our Commentary Page, Bob Lewis, of our sister site, The Virginia Mercury, explains why a Trump on the ropes is a problem for Democrats. And Jake Miller, a social studies teacher in the Cumberland Valley School District, Cumberland County, has some words of advice for parents as schools get ready to reopen.

Elsewhere.
The Appeal’s Joshua Vaughn has a look at the case of a Pennsylvania 13-year-old who shot and killed his brother, and, because of a wrinkle in state law, was immediately charged as an adult.
Black workers protested in Pittsburgh over the weekend, where they demanded hazard pay and paid sick leave. Pittsburgh City Paper has their story.
Three iconic Harrisburg road races: the Harrisburg Mile, the Half-Marathon and Marathon have been respectively rescheduled for Aug. 19, Sept. 13 and Nov. 8, The ‘Burg reports.
The Bloomsburg Fair provoked outrage on social media for posting photos of a man, dressed as state Health Secretary Dr. Rachel Levine, who was put into a dunk tank to raise money for local fire companies, the Citizens-Voice reports.

PennLive talks to a new conservative commentary site that made headlines over the weekend for posts that misgendered Health Secretary Dr. Rachel Levine and falsely claimed that some Pennsylvania counties were returning to the red phase.
Young Philadelphians rallied Monday against rising gun violence in the city, WHYY-FM reports.
Penn State graduate students staged a die-in to demand fully online classes this fall, WPSU-FM reports.
U.S. Rep. Susan Wild, D-7th District, had the strongest Q2 fundraising haul out of any member of Pennsylvania’s congressional delegation, PoliticsPa reports.
Confederate statues would be removed from public spaces under a series of U.S. House bills, Roll Call reports.

What Goes On (Nakedly Political Edition).
11 a.m.: Golf outing for Rep. Todd Stephens, R-Montgomery
6 p.m.: Reception for Sen. Maria Collett, D-Montgomery
Hit both, give at the max, and you’re out a socially distanced $10,000 today.

Tuesday’s Gratuitous Hockey Link.
NHL.com has the full schedule of the exhibition games for this year’s Stanley Cup qualifiers.

Who’s behind the ‘Don’t Blame Me. I voted for Wagner’ billboards? | Tuesday Morning Coffee