Very early in its history, Pennsylvania earned its nickname — the Keystone State — at a time when it was the cultural, political, and economic center of the fledgling United States. Today, it is hardly living up to its name. To do so it will need to make some bold moves, including trusting and investing in its young people.

It is not too hard to come up with a list of things that are potentially holding Pennsylvania back. To start, the regressive tax system, where the tax burden is felt most by poor and working-class Pennsylvanians. A 6 percent sales tax (7 percent in Allegheny County and 8 percent in Philadelphia) and a 3.07 percent flat income tax rate generate most of its revenues.

Despite 10 years of continuous increases in tolls, Pennsylvania has one of the worst highway systems in the country and yet, for the privilege of driving across the Pennsylvania Turnpike, one must pay $50.40 ($36.20 if  you’re using E-ZPass).

To top it off, Pennsylvania has the highest state gasoline tax in the country.

The malaise is evident in Small Town, Pa.

Annual surveys by Wall Street 24/7, analyzing the best-run states, consistently rank Pennsylvania near the bottom. For the average Pennsylvanian, the tax burden is great but the perks are not evident. Contrary to the intent of the state slogan, Pennsylvania is essentially begging people to “pursue your happiness” elsewhere.

Pennsylvania has one of the highest percentages of seniors 65 and over. Senior citizens are an underutilized source of human capital.

Finding ways to maximize this resource is an opportunity to grow and attract young people. For example, investing in retirement communities and increased health care services create job opportunities and provide a win-win situation for both seniors and young people.

Millennials (those aged between 23 and 38) are economically pragmatic, and according to a Pew Research study, they are motivated to curb debt. Some millennials have moved home to save money after college. Pa. should offer incentives to entice fiscally conscious young people.

For example, exempt young Pennsylvanians from paying state income taxes until the age of 30. Another idea might be to follow Maine’s lead and allow people to use payments made toward student loans as tax credits toward what is owed in state income taxes.

“How are the schools?” is an oft-repeated question posed to realtors. Young parents recognize that the right education puts students on the path to a brighter future. They are also looking for ways to alleviate the burden of student loan debt for their children.

Pennsylvania ranks 47th in the country for per-capita spending on public higher education and has one of the highest rates of student loan debt. This is not a formula to attract the next generation of Pennsylvanians.

The Pennsylvania Promise, recently introduced into the General Assembly, would guarantee free tuition for students coming from a household under a certain income. It is worth a serious debate. Another option might be to reduce tuition for out-of-state students at public universities. A third option would be to simply increase funding for public higher education resulting in lower tuition costs for students.

Voting turnout among 18- to 29-year-olds is the lowest among all age groups. There is a high level of voter apathy among young people, and government is culpable. In the commonwealth, some students graduate high school without having taken a civics course. But what if the voting age was lowered to 16?

There would be greater incentives for schools to create a culture of actual, rather than theoretical, civic participation, and government officials –- at the local, state, and even federal levels –- would have no choice but to be more attentive to the needs and concerns of young people.

Civic duty could be part of a young person’s political socialization process at an early age hopefully leading into life-long habits. Pennsylvania would be the first and only state to expand suffrage to young people under 18.

The Philadelphia Phillies recently inked a record 13-year, $330 million deal with Bryce Harper. The 26-year-old free agent was incentivized to make Pennsylvania his home. Isn’t it time for Pennsylvania to make similar bold moves to attract top talent across the board and not just in sports?

JFK’s Thanksgiving wish: That we’re ‘humbly grateful’ for what brings us together 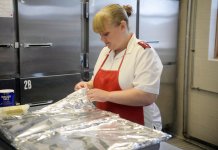 ‘We are in desperate need of volunteers’: How Uniontown’s Salvation Army is scrambling to help those in need | Helping the Helpers

When we end the brain drain, we become the Keystone State again | Opinion