What should happen if abortion returns to the states? An expert explains | Thursday Morning Coffee

If the U.S. Supreme Court tosses Roe v. Wade and Planned Parenthood v. Casey, any bans in effect before the decision should be struck down, a Montgomery County attorney suggests

Abortion rights supporters rally at the Pa. State Capitol on Tuesday, 5/21/19, as part of a national day of action (Capital-Star photo by John L. Micek)

(*This column was updated at 2 p.m., on Thursday, 12/9/21 to include additional analysis on abortion rights and electoral politics)

To say there’s a lot riding on the U.S. Supreme Court’s eventual ruling in a case challenging Mississippi’s restrictive abortion ban is a galactic understatement.

If, as currently appears the case, the court effectively topples Roe v. Wade, the 1973 precedent that declared a constitutional right to abortion, and without a uniform federal statute making abortion the law of the land, regulation of abortion would return to the states — a nightmare scenario if ever there was one. As many as two-dozen states could move to ban abortion if the high court gives them the green light, The Chicago Tribune reports.

Experts believe some states, such as California and Pennsylvania, would become havens for people seeking reproductive care, while others would become reproductive healthcare deserts, putting the health of millions of pregnant people at risk.

But, according to one Pennsylvania attorney, the practical realities of abortion rights reverting to the states are much more complicated and more nuanced.

In an op-Ed published Monday by the Legal Intelligencer, an industry trade paper, attorney Howard J. Bashman, an appellate lawyer from Willow Grove, argues that a decision overturning Roe and Planned Parenthood v. Casey, its 1992 adjunct, “will present numerous issues of fairness rarely encountered in the judicial process.”

If it does toss Roe, Bashman argues that the justices should confront these fairness issues “head-on” by “[decreeing] that all laws having the effect of outlawing or restricting abortion in a manner contrary to Roe and Casey that were in effect when Dobbs is decided will remain unenforceable because they were contrary to governing precedent when enacted.”

And the nation’s highest court should go one better by “[specifying] that the earliest any law having the effect of outlawing or restricting abortion in a manner contrary to Roe and Casey would be allowed to take effect is after all the legislators who voted to enact that law, and the governor of the state who signed the law, were elected to their positions after the court’s ruling in Dobbs had issued,” Bashman wrote.

So, for instance, since voters choose the entire U.S. Senate over six years, with a third of seats on the ballot every two years, the earliest that the federal government could pass a law “having the effect of outlawing or restricting abortion in a manner contrary to Roe and Casey would be in 2029.”

Under such an approach, Bashman continued, Mississippi’s existing law would be declared unconstitutional, and the state could not move on a new statute until its entire state House and Senate were re-elected after any high court ruling.

Undertaking such an action would be unprecedented, but would recognize that the high court has traditionally moved to expand individual rights, rather than “sometimes expanding and other times contracting.”

Unspoken in Bashman’s piece is the reality that such an action also would turn already contentious legislative, gubernatorial, congressional, and U.S. Senate races into the political equivalent of demolition derbies, as the Big Two parties, and their voters, mobilized by a seismic issue, vied for control of statehouses and the halls of Congress.

*That’s particularly true of battleground states, such as Pennsylvania, which was determinative to President Joe Biden’s 2020 win, and helped hand the U.S. House to Democrats in 2018.

For the last seven years, Pennsylvania’s Democratic governor, Tom Wolf, and his veto pen, have stood as a bulwark against repeated Republican attacks on abortion access. Wolf, who has served the constitutional maximum of two terms, will leave office in January 2023.

State Attorney General Josh Shapiro, currently the only Democrat running for the party’s nomination, has vowed to continue that policy, upping the ante in an already competitive contest for an open seat.

The fight for retiring Republican U.S. Sen. Pat Toomey, R-Pa.’s soon-to-be open seat already is attracting national attention. One of the leading Democratic contenders, Valerie Arkoosh, a physician from Montgomery County, has called on the narrowly divided Senate to vote on a previously approved U.S. House bill that would legalize abortion nationwide.

The kind of action Bashman suggests, in GOP gubernatorial and U.S. Senate fields filled with anti-choice candidates would raise the stakes to thermonuclear levels.

In his op-Ed, however, Bashman, again remaining silent on the political implications of such an action, says he doesn’t see any other way for the court to proceed.

“Ordinarily, the court will merely postpone those issues for another day,” he wrote. “But here, if the court in fact decides to overrule Roe and Casey, the best course is for the court to address those issues head-on in a manner that is most fair to all concerned.”

That conclusion will most certainly not cheer people who can get pregnant, and their supporters, but it does give them a fighting chance.

The Pennsylvania arm of a nationwide initiative to prevent suicide among military veterans, service members, and their families is encouraging Pennsylvanians to send a “caring message” to veterans and service members this holiday season, Cassie Miller reports.

Capitol Hill Republicans have slammed the treatment of the accused Jan. 6 insurrectionists who are being held at a Washington D.C. jail, Capital-Star Washington Reporter Ariana Figueroa reports.

In today’s edition of Helping the Helpers, our friends at the Uniontown Herald-Standard let you know how you can help this western Pennsylvania diaper bank that’s badly in need of supplies.

Pittsburgh Mayor-elect Ed Gainey says he plans to put the brakes on a controversial public transit project when he takes office in January, our partners at Pittsburgh City Paper report.

The Philadelphia school district has named the members of a search committee looking for a replacement to outgoing Superintendent William Hite, our partners at the Philadelphia Tribune report.

On our Commentary Page this morning, opinion regular Bruce Ledewitz would appreciate it if some among you stopped calling Kyle Rittenhouse a ‘hero.’ He did, after all, gun down two unarmed people. And opinion regular Fletcher McClellan, joined by Elizabethtown College graduate Alissa Stoneking, has some thoughts about the Biden administration’s democracy summit. 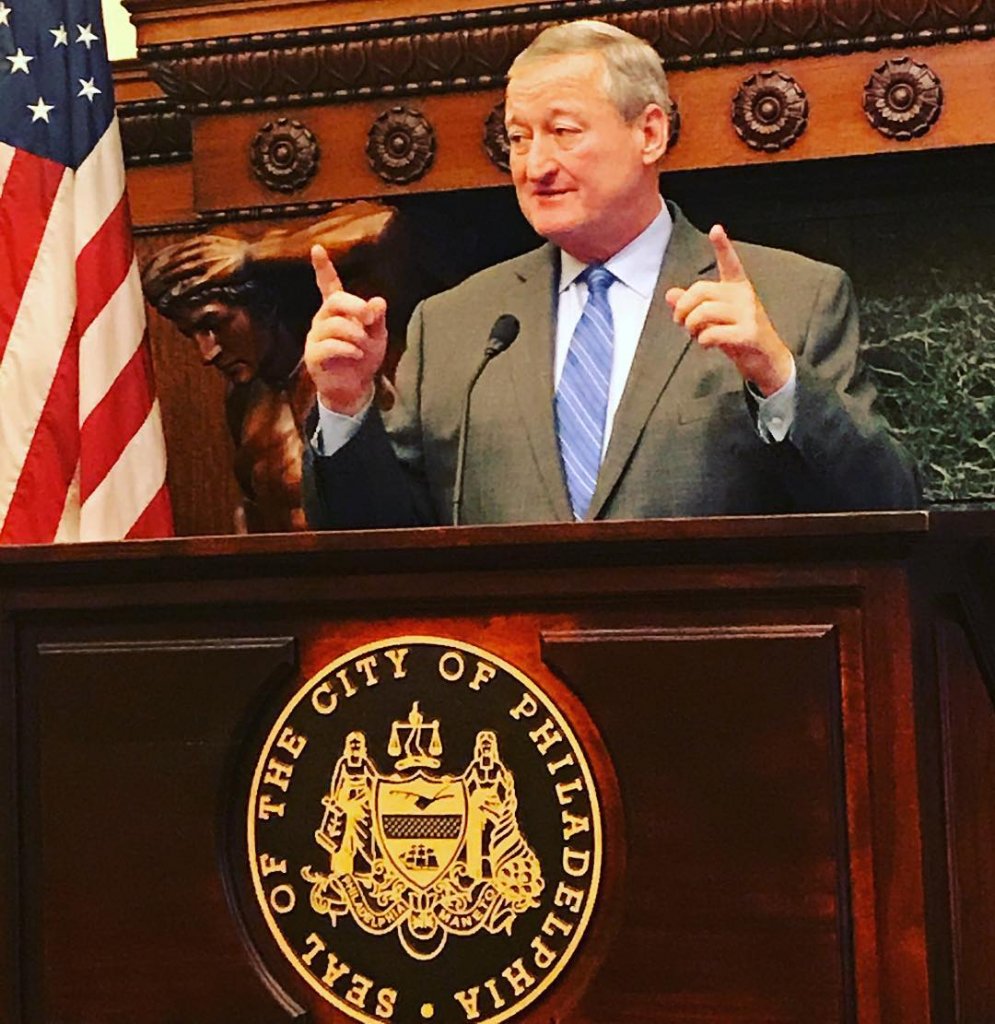 Elsewhere.
Philadelphia Mayor Jim Kenney has acknowledged Philadelphia has a gun crisis, but sidestepped commenting on DA Larry Krasner’s remarks about crime in the city, the Inquirer reports.

So is there really a Christmas tree shortage? Depends on who you ask, PennLive reports.

The legendary Village nightclub in Lancaster is up for sale — the owners want to retire, LancasterOnline reports.

Lehigh Valley pol Marty Nothstein, an Olympic gold medalist, has been charged with stalking his former lover and her boyfriend, the Morning Call reports.

One of the state’s largest health systems, Geisinger Health System, has run out of beds due to the latest COVID-19 surge, the Associated Press reports (via WITF-FM).

WolfWatch
Gov. Tom Wolf holds a pair of events in Philadelphia today. At 10:30 a.m., he joins Democratic leaders encourage people to enroll in healthcare before the Jan. 15 deadline. At 1 p.m., Wolf and Attorney General Josh Shapiro will ‘warn against the harmful effects of anti-abortion policies,’ the administration said in a statement.

You Say It’s Your Birthday Dept
Best wishes go out this morning to Craig Layne, at Dickinson College, and to Sean Simmers, of PennLive, both of whom celebrate today. Congratulations and enjoy the day, gents.

Heavy Rotation
Here’s one from Modest Mouse to light up your December morning. It’s ‘The Sun Hasn’t Left’ from their most recent record ‘The Golden Casket.’

What should happen if abortion returns to the states? An expert explains | Thursday Morning Coffee