I have thought for many days about what to say about the latest incidents of mass shootings. I have expressed my sadness in a previous social media post about a prior incident. Saying the same thing again seems as pointless as thoughts and prayers.

This is a complex topic, with different causes requiring different solutions. There are mental health issues, hatred, racism, horrific gun accidents involving children and the tragedy of suicide. There are shootings related to gang violence and domestic violence. Public records inform us that 600 women annually in America are shot to death by their partner.

Having children changes the way we think. Since Columbine, my children have practiced “active shooter drills.” In the past, I worried but still considered the risk low. That was before Sandy Hook. The year after Sandy Hook I attended a remembrance on the steps of the old courthouse in West Chester. We were all hopeful then that this would be the event that changed everything.

Sad to say, it did not. When the Virginia Tech shooting happened, my oldest son was a high school senior. I was waiting with him at a doctor’s appointment when we saw the news of the shooting. I remember feeling a sickening wave of emotion knowing in a few short months my son would be in college.

My children are grown now and out in the world. They go to concerts, movies and malls, attend high school and college, work and travel.

When I was growing up, I never worried about being the victim of a random shooting. My parents took me to Europe when I was in middle school. There were several bombings in England when we were there. I remember thinking “I can’t wait to get home; this doesn’t happen where we live.” The safety I felt in my youth has vanished, replaced by a nagging anxiety.

It is not just the “mass shootings,” however they are defined, that cause my concern. I am very aware that there is a daily slaughter happening that doesn’t always make the news.

And perhaps I am more anxious than others due to the intimate knowledge I have gained about the needless death and suffering our gun culture breeds because of my father’s experiences as a probation officer, my work as a child abuse investigator and my daughter’s service as a Philadelphia paramedic.

We have more guns than people in this country. I understand that there are rights, but do we want a gun culture that makes us feel as though we are living in a time of terrorism? I believe the best solution to our current predicament is a comprehensive overhaul of our gun laws enacting common-sense reforms supported by clear majorities in our state and country.

There are several common-sense pieces of gun reform legislation stuck in committee in Harrisburg by NRA-backed legislators. However, In the wake of recent gun tragedies, it appears there is growing support for at least two reforms I strongly support.

Either in special session or as soon as we return in September, we need to immediately pass laws requiring universal background checks and implementing a “Red Flag” law giving family members and others the power to ask the courts to remove guns from people who may be a danger to themselves or others.

We must seize the day and immediately make the incremental changes that are within our reach. The fight to ban assault weapons and high-capacity magazines will continue and perhaps one day, we will again leave our homes without anxiety. 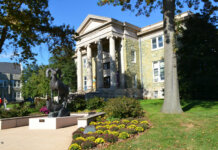 We have the momentum. Lawmakers have act now to fight gun violence | Opinion