Why are these guys smiling? (Capital-Star photo collage by John L. Micek)

There’s no nice way to say this, so we’re just going to come out and say it. It’s been a lonnnnggggg time since Pennsylvania had any clout on Capitol Hill.

Not since dinosaurs … err … the late U.S. Sen. Arlen Specter, R-D-Whatever-Pa., prowled the halls of the Capitol has the Keystone State come even close to being drunk on the kind of pure power that comes with being gifted with serious clout in Washington.

Oh, sure, you say, what about U.S. Rep. Bill Shuster, R-Pa., who chaired the House Transportation and Infrastructure Committee?

Shuster  may have had a chairmanship. But let’s face it, most Pennsylvanians will remember the Shusters for ramming through the funding for an interstate highway driven primarily by Penn State fans who got lost on the way to State College and ended up in Altoona.

But as Capital-Star Washington Bureau Chief Robin Bravender (Yeah, we got one of them) reports this Friday morning, Pennsylvania now has not one, but two, seats on the uber-powerful, tax-writing House Ways & Means Committee.

“Under the Constitution and our system of checks and balances, Congress has not just the right but the responsibility to oversee whether our laws are faithfully executed by the executive branch,” Boyle said. “In accordance with this duty, almost a century ago, Congress explicitly enumerated this committee’s right to review any return or return information.”

Democrats on the oversight panel focused on legislation that would require candidates running for president and vice president to release their tax returns. Past presidents have typically done so, but Trump has withheld his, enraging Democrats who accuse him of having something to hide.

It’s unusual for one state to have such a strong presence on the coveted committee.

“That’s rather unique to have not just two people from the same state, but from the same city,” Evans told the Capital-Star Thursday in an interview.

“’Obviously Philadelphia and Pennsylvania is very significant to this country and significant in that it’s one of the original 13 states.”

He said Pennsylvania has historically had an important presence on the panel, pointing back to U.S. Rep. Thaddeus Stevens, a Pennsylvania Republican who was Ways and Means chairman from 1861 until 1865.”

More of our stuff:
Associate Editor Sarah Anne Hughes has a look at Gov. Tom Wolf’s second try at getting municipalities without their own police departments to pay for their free state police protection.

Hughes and Staff Reporter Elizabeth Hardison go deep on the Wolf administration’s push for a $45,000 minimum salary for school teachers.

And a columnist of your acquaintance wonders whether, emboldened by recent action in Washington, we’ll see a resurgence by payday lenders in Pennsylvania this year.

Elsewhere.
PhillyClout explains how Johnny Doc aimed a threat in the wrong direction.

The Post-Gazette runs down Attorney General Josh Shapiro’s lawsuit against UPMC, which accuses the regional healthcare giant of straying from its charitable mission.

PennLive explains why it’s such a big deal that a Sunday hunting bill cleared a state Senate committee.

GoFundMe is holding a free seminar in Philly on crowd-funding for social benefit,BillyPenn reports.
Here’s The Incline on Pittsburgh’s new incubator for women-owned businesses. 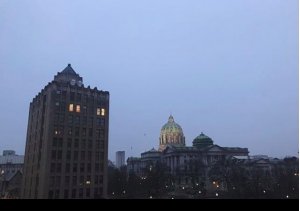 WHYY-FM takes a look at the state’s efforts to ensure election security ahead of 2020.

What Goes On.
U.S. Sen. Pat Toomey, R-Pa., joins U.S. Rep. Lloyd Smucker, R-11th District, and Lancaster County’s GOP commissioners for a 2 p.m. event at the county government center, rolling out a bill aimed at stopping future government shutdowns. Toomey and Smucker we get. We’re just assuming the county commissioners are along for the ride because this is an odd-numbered year.

WolfWatch.
Gov. Tom Wolf heads to Philly for a pair of events as his “Please, for the Love of God, Pass My Budget, It’s Practically Republican”  tour continues. At 11:30 a.m., he’s at Misericordia University in Dallas, Pa., to talk up a program that helps lift single moms out of poverty. At 2:15 p.m., he’ll rally for a higher minimum wage at the Frankford Transportation Center.
We said … “practically Republican.”

Heavy Rotation.
Here’s an absolute classic by The Clash to get your Friday morning rolling.

Friday’s Gratuitous Hockey Link.
Carolina’s Teuvo Teravainen lifted the Hurricanes to a 6-5 overtime win in Buffalo on Thursday night. It was the ‘Canes’ eighth, straight win over the Sabres.