(*Updated, 7:54 a.m, 8/17/20: This piece has been corrected to reflect the fact that Social Security checks are no longer mailed to benefit recipients)

“If you can stand at line at Walmart or Target, you can vote at your polling place. As for the post office, who even uses them anymore? We have FedEx and UPS for packages, what do we even need the Postal Service for?”

The question above was left in our inbox over the weekend by a reader named “HockeyMomm55,” who got in touch via her AOL account. Apart from shocking us into realizing that there are some people who actually still have an AOL account, it also struck us as a question that was absolutely worth an answer.

We’ve spent much of the last week debating the importance of the role of the Postal Service and the centrality of mail-in ballots in this November’s general election. Underlying a lot of that coverage was the assumption that the United States Postal Service is an essential function of government, and one that, in this age of email and instant gratification, that we cannot live without.

So why do we need the Postal Service? Allow us to endeavor to answer.

But, first, some obligatory background.

Our correspondent is certainly correct, one of the main reasons for the Postal Service’s currently shaky finances, is a drop off in revenue from the main services that fund it: the sale of such postal products as stamps and envelopes, and services, such as parcel deliveries. As Business Insider reported back in 2019, Federal Express does have something to do with the drop-off in parcel volume. And as CBS News notes, revenues were further impacted by the coronavirus pandemic.

The structural instability, however, actually goes back nearly two decades to the administration of former President George W. Bush.

In 2006, Bush signed a bill passed by the GOP-led Congress that required the Postal Service to calculate its likely pension costs for the next 75 years and then put away enough money between 2007 and 2016 to cover all, or most of those costs, as The Week reported in 2018.

Undoubtedly, this sounded like a great idea to free-market Republicans at the time. HEY! FISCAL RESPONSIBILITY! But, keep in mind, these are the same scholars who thought a second war in Iraq was a great idea.

The legislation, the Postal Accountability and Enhancement Act of 2006, meant that the Postal Service had to put away an extra $5.6 billion a year. This is the functional equivalent, as The Week’s Jeff Spross writes, of putting away enough to pay off your mortgage right now, even though you still plan to make payments over the next 30 years. Pensions, as Spross points out, work the same way as your mortgage: Costs come in over time, as does the income needed to pay them.

Thus saddled with what amounted to an 8 percent tax on its revenues, and a fiscal burden faced by no other federal agency, the Postal Service unsurprisingly began defaulting on those payments in 2012. Abetted by the rise of eCommerce and paperless billing, the agency lost $62.4 billion between 2007 and 2016, over one of the dumbest bookkeeping requirements of all time.

Now, with that in mind, flash forward to 2020, and why we’re arguing over the Postal Service.

The reason we are where we are now is largely due to the guy above — President Donald Trump, whose grudge against the Postal Service is well-documented. Over the weekend, the Washington Post’s Philip Rucker, Ashley Parker and Josh Dawsey traced the evolution of Trump’s obsession, as well the escalation of the rhetoric that Trump has deployed against it.

In short, to Trump, the Postal Service was the embodiment of bloated, inefficient federal bureaucracy. His grievance was only magnified when sycophants falsely told him that he’d lost the popular vote to Hillary Clinton because of mail-in ballot fraud, the Post reported.Thus are presidential grudges born, as Trump set his sights on dismantling the Postal Service and the delivery delays we’re seeing now and the threats of future delays for mail-in ballots. He’s also doing it to spite Amazon boss Jeff Bezos, whose company depends on the Postal Service to get its products to your front door.

And that’s also how you get weeks of false claims in 2020 that mail-in balloting will lead to electoral fraud. As well as Trump’s deeply dangerous threat last week to withhold $25 billion in critical Postal Service funding and $3.6 billion in aid to states just to frustrate mail-in balloting.

If you’re looking for an excellent explainer on how Trump’s beef with the Postal Service will impact Pennsylvania, we’ll commend to you this Sunday story by Stephen Caruso that answers every question you have and probably some you haven’t thought of yet.

Which brings us, finally, to our reader’s original question, “Why do we even need the Postal Service to begin with?”

1. Mail-in and Absentee Balloting: As we noted here Saturday, no-excuse mail-in balloting is popular among all Americans (though there is a noted partisan split between Democrats and Republicans, because this is 2020 after all). But even Republicans, as The Atlantic points out, are telling their voters to ignore Trump, because they see it as a path to victory in key swing states. Trump and his family also vote by mail.

*2. Government Services: While many government services have migrated online, the Postal Service, as Newsweek notes, remains a vital conduit for local, county, and state governments, which use it to send out everything from tax bills and jury summonses to vehicle renewal notices and other important documents such as, unemployment, and veterans benefits checks, as well as medications.

3. Middle-Class Advancement: At a time when the American Dream seems more like a myth, the Postal Service remains one of the rare “ladder” careers, where it’s possible to work your way from an entry-level position to a good-paying, family-sustaining job. All told, the agency is single-handedly responsible for 630,000 federal positions. And while they make up 13.4 percent of the nation’s population, Blacks make up 20 percent of the Postal Service workforce, providing more upward mobility than other segments of the U.S. economy. At a time of record unemployment, that reality can’t be cavalierly discarded.

4. It’s Popular: A 2013 Pew poll listed the Postal Service as one of the most popular government services, well ahead of the executive branch and lawmakers who now hold its future in their hands. In addition, the Post Office remains a lifeline in rural America, serving as a central community gathering place, and a connection to the outside world, where distances are vast and not easily traversed.

5. It’s Uniquely American: You may not know this, but the post office is enshrined in the U.S. Constitution: Article 1, Section 8, Clause 7 of the nation’s foundational document, known as the Postal Clause, or Postal Power, gives Congress the authority to “establish Post Offices and Post Roads.” In 1775, then-Postmaster General Benjamin Franklin used his post to facilitate communications between American revolutionaries, according to Bloomberg’s CityLab. And during the pandemic, postal workers were essential employees –think about the joy and relief you felt at something as simple as the mail being delivered, that reaffirmation it provided of your link to the outside world during lockdown. As CityLab notes, postal service workers have died as a result of COVID-19. Ask yourself — really ask yourself — if we owe them something more than gutting an essential agency. 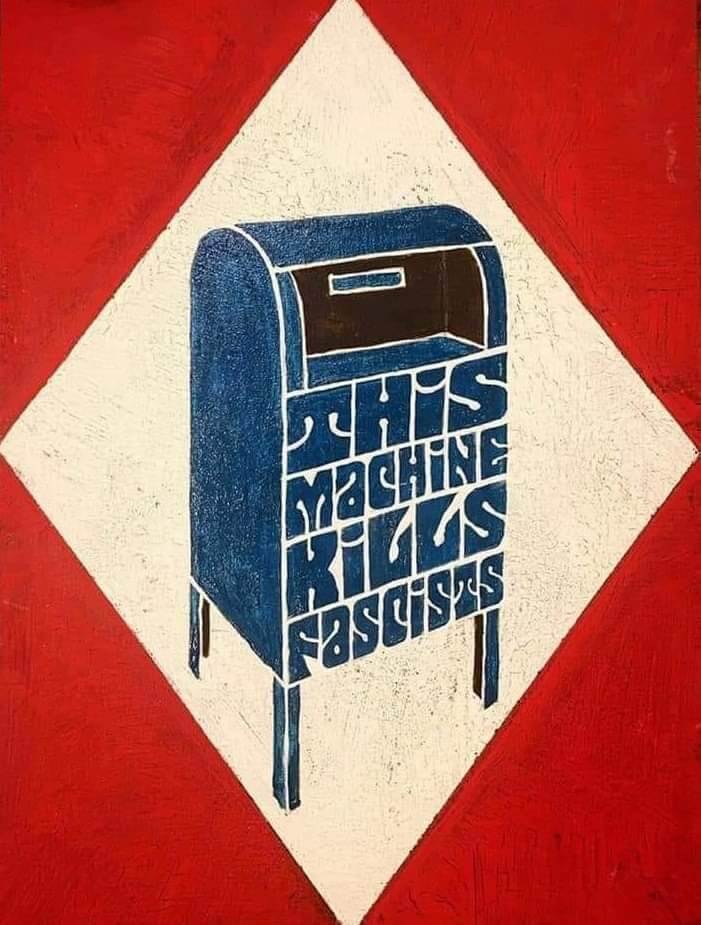 Our Stuff.
Cassie Miller leads our coverage this morning, with this week’s edition of The Numbers Racket, where she takes a deep dive into public attitudes toward the Trump administration’s handling of the pandemic. Spoiler alert: People aren’t happy.

From the weekend:
As we mentioned up top, Stephen Caruso has a must-read explainer on how the fight over the Postal Service and mail-in balloting is reverberating in Pennsylvania.

Concerned parents are speaking up about racism and discrimination at the Waldorf School of Philadelphia, our partners at the Philadelphia Tribune report.

And from our partners at the Central Voice, here’s a look at how one LGBTQ advocacy group is working to foster understanding and acceptance in their rural Pennsylvania community.

On our Commentary Page this morning, opinion regular Dick Polman explains why Kamala Harris reflects the diverse promise of America.

Elsewhere.
It was another violent weekend in Philadelphia, with the city again topping 20 victims of gun violence, the Inquirer reports.
An angry crowd gathered outside Pittsburgh Mayor Bill Peduto’s house, to raise their voices against a police arrest of a protester, the Tribune-Review reports.
Protesters picketed York Catholic High School on Sunday after a student was told he couldn’t wear a Black Lives Matter mask to graduation, PennLive reports.
The Morning Call looks at the assistance that’s available for people struggling with high energy bills during the pandemic.
The Citizens-Voice was on hand for moving-in day at Penn State’s Wilkes-Barre campus.

What Goes On (Nakedly Political Edition).
The Pa. Chamber of Business & Industry holds a golf tournament at Hershey Country Club. Admission runs $250 to $1,500.

You Say It’s Your Birthday Dept.
Best wishes go out this morning to Megan Winters, in the office of state Sen. Lindsey Williams, who celebrates today. Congratulations and enjoy the day.

Heavy Rotation.
Here’s one from The Strokes to get your Monday morning rolling, it’s ‘Whatever Happened.’

Monday’s Gratuitous Baseball Link.
Baltimore lost 6-5 to the Nats on Sunday in their Beltway series. The O’s dropped to 3rd in the AL East, three games out of first place.