In a statement accompanying the extension, the administration touted a number of victories in fighting abuse and addiction — not least of which is the welcome news that overdose deaths are down, and that the anti-overdose drug Naloxone is more widely available.

But as a new study by researchers at Syracuse University, the University of Iowa, and Iowa State University makes clear, for all that progress, public health experts are waging a multi-front fight that is still a long way from over.

Writing for The Atlantic’s CityLab, Richard Florida says researchers found that “the opioid crisis takes different forms in urban and rural America. While the urban opioid crisis is a crisis of heroin and illegal drugs, the rural opioid crisis of prescription drugs is largely a story of growing spatial inequality and of places left behind, most often occurring, as the authors note, in places that tend to have a declining industrial base.”

In the two maps below, we’ll take a look at what this “opioid hydra,” as the Syracuse and Iowa researchers describe it, in greater detail. 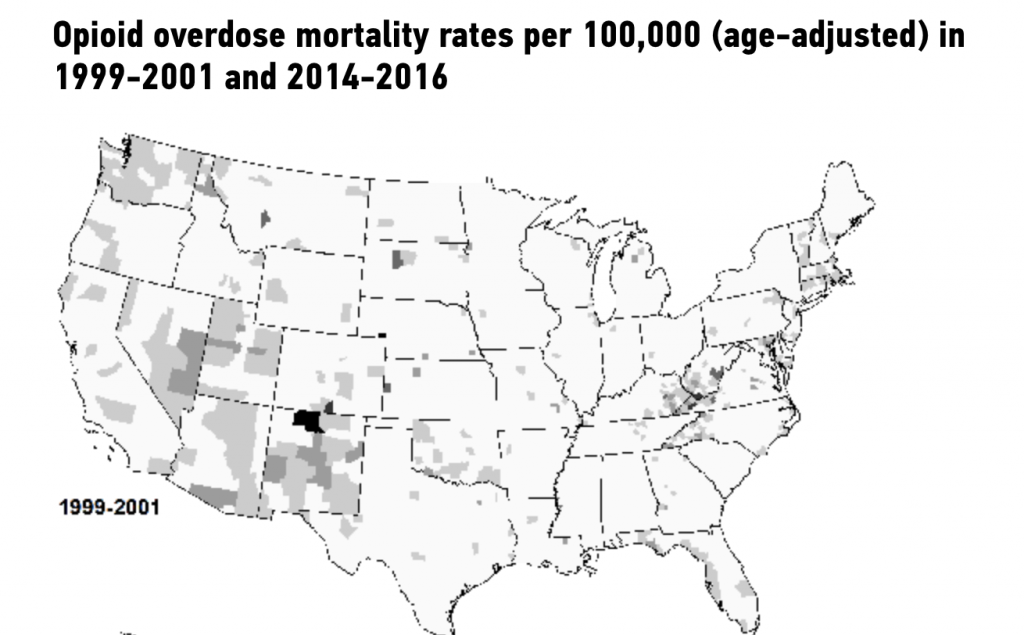 That’s what mortality rates, per 100,000 people (and age-adjusted) looked like in 1999-2001 nationwide. Take a close look at Pennsylvania, where the rates barely register as a blip.

As Florida notes, the early years of the epidemic largely involved prescription drugs, and it was mostly a rural phenomenon. The second and third waves of the epidemic involved heroin and such synthetic opioids as fentanyl, and the problem was more urban — as the darker shading on the map shows.

But, “there is a final and more troubling strand of the opioid epidemic: Places where opioid deaths come from a mixture of prescription opioids, heroin, and synthetic opioids—what the study refers to as a ‘syndemic” crisis,'” Florida writes.

In all, 4 percent (129 of 3,079 counties nationwide) fall into this category, researchers found. But check out the geography: The ‘syndemic’ opioid epidemic is “concentrated in the eastern third of the nation: in Maryland, Massachusetts, rural Appalachia, stretching into Indiana, and in Michigan,” he wrote, while “a third cluster is located around Santa Fe, New Mexico. Nearly two-thirds (64 percent, or 82 counties) of syndemic counties are in metropolitan areas, with 36 percent (47 counties) in rural or non-metro areas.”

Pennsylvania, you’ve no doubt noticed, is darkly shaded, suggesting that while public health experts have some reason to be cheerful, the challenge is far from over.

But if you take nothing else away from this important research, take this from Florida:

“A common theory for the opioid crisis is that it developed from abuse and over-prescription of legal opioids. The study, however, finds this theory holds only in rural areas. It reads: ‘Rural industrial decline left a legacy of unemployed and underemployed people with some form of work disability,’ and notes that ‘… a plausible treatment for work-related pain, likely involving opioids prescribed by a health provider, helped start the cycle of opioid addiction that would culminate in the current crisis.’

“But another part of the explanation comes from the fact that many of these places have long histories of drug and alcohol abuse. As the study points out, ‘the current rural opioid crisis is part of a broader drug problem, taking root in smaller communities with an existing drug user population and/or socioeconomic conditions favorable to drug abuse.’”

So it’s not enough to fight the drugs. It’s a matter of somehow fighting the despair and wealth inequality that leads some down this road in the first place. It’s a reminder that public policy solutions are rarely just one thing.

Our Stuff.
Stephen Caruso leads our coverage this morning with an in-depth look at the fight to keep the state from shuttering two centers that serve people with intellectual disabilities.

A landmark criminal justice reform package that could save the state tens of millions of dollars over the next five years could be on Gov. Tom Wolf’s desk by the end of the week, Elizabeth Hardison reports.

A PAC partially funded by billionaire — and 2020 Dem candidate — Tom Steyer has launched a $4.5M effort to register young voters in Pa. for 2020.

From our partners at the Philadelphia Tribune: Eagles star Malcolm Jenkins has added his voice to the ongoing conversation over the search for a new Philadelphia police commissioner.

On our Commentary Page, A Northwestern University Law School professor explains why, despite what you may have heard, the Senate is not an impartial jury in the Trump impeachment. And while the U.S. Constitution could do with some improvement, the path suggested by a Pa. House resolution is not the way forward, Marc Stier of the Pennsylvania Budget & Policy Center argues.

Elsewhere.
The Inquirer has the details on a new report finding that single moms in college have a lot on their plates — and need help.
Hundreds rallied in Pittsburgh on Monday in support of impeaching President Donald Trump — part of a nationwide day of action. Pittsburgh City Paper has the details.
Harrisburg City Council has approved its 2020 budget, which includes salary hikes for city police officers, PennLive reports.
The Morning Call has what to expect from Pennsylvania’s U.S. House delegation during today’s impeachment vote. All nine Dems are ‘yes’ votes on the articles.

Philly renters have to deal with some ‘major issues,’ WHYY-FM reports — or face eviction.
WITF-FM has the details on the pro-impeachment rally in Harrisburg.
Talking Points Memo explains why ‘kicking the impeachment witness can down the road,’ is a thing for Mitch McConnell.

What Goes On.
The House and Senate both gavel in for their final voting session of the year at 11 a.m.
9:30 a.m., Media Center: GOP Reps. Seth Grove, Dawn Keefer and Tim O’Neal hold a presser on ‘reforming the financial management of the commonwealth,’ which, given the hosts, sounds a whole lot like spending cuts.
10 a.m., Main Rotunda: Sen. Vincent Hughes and Rep. Elizabeth Fielder, of Philadelphia, call for fixing toxic schools. Philly, as we’ve read recently, has a sad plethora.
11:30 a.m., East Rotunda: A rally to “fix” medical marijuana.
12:30 p.m., East Rotunda.: Sens. Vincent Hughes, Katie Muth and Maria Collett, all Dems, call for reform of judicial nominations.
2 p.m., LG’s Porch: House and Senate Dems call for a minimum wage hike before the holidays.

What Goes On (Nakedly Political Edition).
State Sen. Mario Scavello, R-Monroe, holds an 8 a.m. breakfast at McGrath’s on Locust Street in Harrisburg. Admission runs an entirely ridiculous $500 to $2,500. If the eggs don’t confer heat vision, inquire after a refund.

You Say It’s Your Birthday Dept.
Have a birthday you’d like celebrated in this space? Drop us a line at [email protected].