Anyone who knows me knows I’m one of those Americans who loves the flag, posting it not just on holidays.  I’ll wear soccer jerseys bearing the U.S. emblem, and t-shirts from patriotic races.

I’ve written columns praising the “Star-Spangled Banner,” defending our National Anthem long before Colin Kaepernick played a down in the NFL, when people were slamming it for its tune, preferring “America The Beautiful.”

And yes, some of them were conservatives.

I love our story too.  While I know our country and leaders aren’t perfect, those who constantly run down our country, or mangle our American Revolution’s history, really grate on my nerves.

But there’s something more to being American. It’s also the way we treat others.  It’s the political and economic freedom, a hospitality and even a grudging respect for views we don’t always agree with, so long as they don’t call for leading hate crime attacks on other Americans.

Remember the phrase “I don’t agree with what you say, but I will defend your right to say it to the death?”

When President Donald Trump told several women of color who serve in the United States Congress to “go back” to where they came from, it reminded me of another time a foreign-born member of Congress got on my nerves.

And I’m not talking about Democratic U.S. Reps. Alexandria Ocasio-Cortez, of New York; Rashida Tlaib, of Michigan; Ayanna Pressley, of Massachusetts (all of whom are native-born Americans), and Ilhan Omar, of Minnesota (who was born in Somalia, immigrated to the United States when she was 12, and who is now a naturalized citizen).

With their silence on ‘The Squad,’ Republicans are complicit in Trump’s racism | John L. Micek

I’m talking about U.S. Sen. Ted Cruz, R-Texas, who, over the course of his career on Capitol Hill, has filibustered to shut down the government by reading aloud from “Green Eggs and Ham” on the Senate floor; protested our budget deficit when it was $425 billion in 2015; pushed to end net neutrality; criticized former President Barack Obama’s plan to stabilize Iraq, and said atheists have no business being president.

I had the chance to meet with Cruz, who was born in Canada and maintained his Canadian citizenship until recently, but I didn’t insult him to his face, even though I didn’t approve of his policy stands or the candidates he supported.

My conversation with Cruz was respectful. I even told him I agreed with some things he’d said. I could have ripped on him, told him to go back to his country.

I understand the sentiment. But it’s wrong, and most Americans know it.

When we see Trump, he’s usually hugging an American flag. But that’s not always the case.

Before the 2017 Super Bowl, he defended Vladimir Putin by throwing America under a bus.

When former Fox News host Bill O’Reilly said of Putin “But he’s a killer,” Trump replied “There are a lot of killers. You think our country’s so innocent?”  Putin’s spokesman even demanded an apology from Fox News.  Yet despite Trump’s comments, I still call him the U.S. president in every column.

It’s time we got back to being Americans, respecting each other’s differences and viewpoints, and not telling someone to “go back home.”  That ain’t us, or the U.S.

John A. Tures is a political science professor at LaGrange College in LaGrange, Ga. His work appears occasionally on the Capital-Star’s Commentary page. Readers may email him at  [email protected], and follow him on Twitter@JohnTures2. 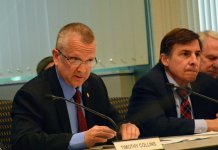