For almost four years now, I have been publicly asserting that Donald Trump is unfit to be president. The first time came in a September 2016 PennLive Op-Ed where I stated that he was the most unprepared, divisive, biased, self-centered and unprincipled major party nominee in our lifetime.

Since that first Op-Ed, Trump’s unfitness has been repeatedly confirmed by his words and actions. From his obstruction of the Mueller investigation; to his support of white Nationalists at Charlottesville; to his emolument violations when foreign dignitaries and our own military stay at his properties to curry favor; to his efforts in asking a foreign country to dig up dirt on Joe Biden ahead of the 2020 election and his obstruction of that investigation, Trump has repeatedly shown why he is unfit to be president.

But now in the last few months, two new occurrences have placed his unfitness to the forefront.

The first involves Trump’s handling of the COVID-19 pandemic. History will not judge kindly his handling of this public health crisis. Since its beginnings, Trump has downplayed the severity of this crisis, at first calling it a Democratic and media hoax and stating it was “under control” and would “magically disappear.”

He did this even though he was warned in early January by his national intelligence that COVID-19 could be a pandemic and again in late January by a senior aide’s memo stating it could affect 100 million Americans and kill 1-2 million. Trump claims he didn’t read the memo, and that excuse is plausible since he doesn’t read.

Trump’s duty as president is to keep Americans safe, especially during a national emergency. A strong president would have asserted his authority under the Defense Production Act in January after getting these warnings to have testing kits, face masks, and ventilators mass produced.

Trump, however, says his role is as a “cheerleader” putting a positive spin on events. He has even declared that “I take no responsibility at all” and repeatedly has blamed others including Democratic governors, the doctors and nurses, the World Health Organization, and even President Obama for his failures to respond adequately to the crisis.

Americans, however, want to know the truth and facts so they can deal intelligently with the virus. In football terms, they want a quarterback, not a cheerleader.

Trump’s failure to act decisively at the earliest stages has caused more sickness and death mainly from the lack of adequate testing. These early failures are highlighted in a recent New York Times article that lays out we would have had up to 90% fewer deaths today had we started social distancing two weeks sooner.  Think of it, instead of 50,000 plus deaths, our death toll could have been around 5,000 today with more decisive, early action by Trump.

Trump has also made matters worse by his pre-2020 actions disbanding the White House pandemic task force, cutting CDC funding, and disregarding briefings from Obama administration officials at the start of his presidency relating to pandemic preparedness (the briefing books were found in the White House trash).

And now just this past week, Trump suggested at one of his daily press briefings that injecting or digesting disinfectants like bleach could help if you have COVID-19.

This type of reckless behavior could put more American lives at risk if persons actually do what he suggests, and required many health experts and politicians to have to issue public statements discrediting this idiotic idea.

As with everything else during his presidency, Trump has made the crisis all about himself. The narcissist-in-chief is more concerned about how the pandemic will affect his reelection chances and worries more about the stock market than he does about the pandemic’s human toll. He will readily sacrifice your grandma to get the economy moving again.

Tuning back into the 2020 presidential election – here’s what to watch for next | Mark S. Singel

The second occurrence centers on what happened in Wisconsin’s primary earlier this month. Trump and his Republican allies supported requiring persons to vote in person instead of delaying the primary or at least extending the time for mail in ballots.

Trump’s reaction was if you expand early voting or voting by mail “you’d never have a Republican elected in this country again.” With a pandemic swirling around him, Trump says people should vote in person in November putting their lives at risk, even though he just voted by mail during the Florida primary because he “was allowed to.”

What is wrong with this view?  We live in a democracy, not Russia or China. We should be making it easier and safer to vote and not trying to suppress it, especially during a pandemic.

As these events show, Trump’s incompetency has turned deadly. We have never seen such a level of unfitness for command. Trump has now become the worse president our nation has ever had. James Buchanan, in his grave, is sighing a bit of relief today knowing he is no longer the worst president.

Carl Hisiro is a retired attorney. He writes from Susquehanna Township, Dauphin County 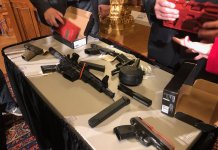