Is the $9.50 an hour minimum wage hike bill the Senate passed on Wednesday night completely perfect?

Is it absolutely better than nothing at all? Better believe it.

Let’s review: For the first time in more than a decade, as the Capital-Star’s Stephen Caruso reported, a legislative chamber voted to increase Pennsylvania’s minimum wage, a move that, if finally enacted into law, has the potential to hand a raise to tens of thousands of working people across the state.

But as Senate Majority Leader Jake Corman, R-Centre, pointed out on Wednesday night, it’s also better than zero. And if you’re an hourly employee, you may gripe about the amount of your raise, but you’re not going to turn it down, either.

According to estimates from the nonprofit Economic Policy Institute, the increase will impact 609,000 workers directly and indirectly, and increase incomes by nearly $500 million. Every little bit helps — and advocates need to keep sight of that.

There was some expected griping on social media and from some Senate Democrats, including Sen. Vincent Hughes, of Philadelphia, the ranking Democrat on the Senate Appropriations Committee. The hike isn’t indexed to inflation, and tipped workers, such as wait staff, are left out.

“We will vote to put money in the pockets of low-income working people, because somebody needs to do it,” Hughes said, according to PennLive’s Charlie Thompson. “But let’s be clear… There is no win here. There’s no win. None that we should be celebrating.”

Hughes is right — there isn’t a win. Not yet.

The bill still has to get through the majority-Republican House, where conservative Republicans have signaled that they’d rather be set on fire than hand a wage hike to anyone. The small business community, which would be most directly affected by a wage increase, signaled its priorities Thursday, blasting out a press release calling for business tax cuts.

“Small businesses will flourish if these changes are made to our state tax code and that’s good for the Pennsylvania economy and makes us more competitive,” Gordon Denlinger, of the Pennsylvania branch of the National Federation of Independent Businesses said in a statement. “We have seen a surge across the country in small business expansion and hiring ever since the federal tax law was updated, and this will have a similar impact on our state.”

Which is the kind of thing you’d expect the business lobby to say, as it takes a break from doing an Uncle Scrooge McDuck backstroke through piles of gold coins.

The pot, conceivably, could be sweetened for Republicans now that Wolf has dropped his push for an overtime hike for lower-level managers. And pro-business leaders could console themselves in the knowledge that, at least for now, they’ve put the brakes on Wolf’s $12/hour push, as PennLive’s Thompson noted.

Some Democrats, such as Dauphin County Rep. Patty Kim, who led the $15-an-hour fight in the House, are getting ready for the next phase.

“There’s no time to rest,” she told Caruso. “There’s no commitment that the House will pass this, so we gotta go hard.”

Given the vagaries of the calendar, the earliest the House could get to the bill is next month. That’s assuming the chamber comes back in December. There have been stubborn rumblings that this week might be the last week of voting sessions for 2019.

But Mike Straub, a spokesman for House Majority Leader Bryan Cutler, R-Lancaster, swatted those down Thursday, saying the House plans to be in session for both of its scheduled weeks next month.

There’s this at least: Assuming the House passes the bill, Pennsylvania would finally join the company of neighboring states that have increased their minimum wages. So from here, Democrats and their allies have to push for a win in the House.

Then, it’s all eyes on 2020. With this hike, Democrats have a purpose-built argument for why they deserve more seats in the state House and perhaps (and this is a big lift) a majority in the Senate. If workers and Wolf want $12 or $15 an hour, then it’ll be up to Democratic majorities to deliver it to them.

The fight for $15? That continues. 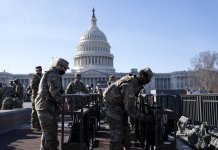