Pennsylvanians are waking up this morning much the same way they went to bed: With no clear winner declared in the race for the White House and with the Keystone State as much of a critical swing state as ever.

And in Pennsylvania, Trump was leading, at least among in-person voters, with a staggering number of mail-in ballots yet to be counted, which are expected to favor Democrats.

Trump falsely asserted early Wednesday morning that there had been election fraud, the Washington Post reported, and tried to claim victory.

Biden punched back, saying he was still “on track” to win the election.

As the Inquirer notes, Michigan, Wisconsin, and North Carolina, all critical swing states, remained too close to call. Trump has pledged to bring the fight all the way to the U.S. Supreme Court — which was fait accompli headed into Tuesday in any event.

Late Tuesday night, Pennsylvania Gov. Tom Wolf and Secretary of State Kathy Boockvar appealed to Pennsylvanians to be patient as counties went about the laborious process of counting ballots.

“Counting that tremendous number of ballots, again, will take longer than we’re used to,” Wolf said. “But the extra time is just there because we want to make sure that our election system is working and that each and every vote is counted.”

“Take a deep breath,” he said, adding that Pennsylvania will have a fair election.

“And make no mistake,” Wolf said, “we’re going to stand up, as we always have, to anybody who wants to silence the voices of Pennsylvanians who have voted.”

“Frankly, I think you’re the ones that should resign,” Boockvar said. She added that Senate Republicans should resign for not allowing Pennsylvania to pre-canvass early “as 46 other states across the country had done.”

By late Tuesday night, an expected blizzard of litigation had not emerged, with Republicans asking a state court to block election officials from counting ballots cast by voters who were told that their mail-in votes were in danger of being disqualified, the Capital-Star’s Elizabeth Hardison reported.

In a Commonwealth Court petition they brought with four Pennsylvania voters, Republican state House candidate Joseph Hamm and  U.S. Rep. Mike Kelly, R-16th District, argued that Boockvar violated state election law when her agency told counties they could enlist campaign representatives in their efforts to notify voters of problems with their mail-in ballots.

Mail-in ballots in Pennsylvania can be disqualified if they don’t have a voter signature, or if they aren’t enclosed in a secrecy envelope. The state faced federal lawsuits this year after counties disqualified ballots without giving voters the opportunity to remedy them.

On Capitol Hill, Democrats gained at least one Republican-held seat in the U.S. Senate, but also lost a seat of their own and were unable to defeat several GOP incumbents in the elections, ending up early Wednesday with an increasingly challenging path to wresting control of the chamber away from Republicans.

The initial results showed a disappointing night for Democrats, and made the prospect of another two years of a politically divided Congress more likely, even as lawmakers struggle to come to an agreement on an economic relief package amid the COVID-19 pandemic.

In Colorado, Democrats succeeded in flipping the seat held by GOP Sen. Cory Gardner, a first-term lawmaker seen as one of the most vulnerable Senate Republicans this cycle. He struggled in his reelection race against Democratic former Gov. John Hickenlooper, who also sought the presidential nomination this year.

You can read all our live coverage from Tuesday here. And we’ll be back at it today, bringing you the very latest.

Over the bridge and through the woods

Heavy Rotation.
It’s going to be a long day, so here’s seven hours’ worth of meditation music to help you get through it. 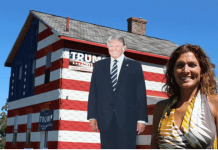 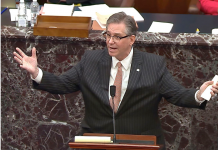 The one thing we know about Election 2020: Pa. is right in the middle of it | Wednesday Morning Coffee