Governor Tom Wolf speaks about efforts to raise Pennsylvania’s minimum wage. Governor Tom Wolf is building on his commitment to help hardworking Pennsylvanians. Today, the governor joined legislators and workers to renew his call to raise Pennsylvania’s minimum wage to $12 an hour with a pathway to $15. Later this week, the governor’s plan to extend overtime pay eligibility to 82,000 more workers will be considered by the state’s rule-making board. Harrisburg, PA – January 28, 2019

Opponents of raising the minimum wage seem to have an inexhaustible supply of concerns which they repeat no matter how often we present evidence that refutes them.

This might sound plausible for a second—or until one remembers that the minimum wage was created during the Great Depression by the Fair Labor Standards Act of 1938 (FLSA). After a slow recovery from the Great Depression, the economy went into reverse in 1937 and the beginning of 1938.

The reason is clear.

In 1936, President Franklin Roosevelt started to listen to orthodox economists worried about the budget deficit. Taxes were raised, government spending was cut and the U.S. government had a balanced budget in 1937. The Federal Reserve raised interest rats as well, hurting the economy.

In response, Roosevelt encouraged Congress to enact new spending programs and renewed his fight for the FLSA, which Congress passed and he signed on June 25, 1938. The FLSA required employers to pay time and a half after 44 hours of work, banned child labor, and created a minimum wage of 25 cents per hour.

Just like today, business people complained. Roosevelt responded the way we should respond today (with numbers adjusted for inflation): “Do not let any calamity-howling executive with an income of $1,000 a day, … tell you … that a wage of $11 a week is going to have a disastrous effect on all American industry.”

While the minimum wage did not apply to all workers, 25 cents an hour was a significant wage in 1938. Indeed, it was 42 percent of the average wage of Pennsylvania workers that year.

However, in the years since 1968 the minimum wage was not raised in step with inflation and is now at an all-time low of 25.1 percent of the average Pennsylvania wage.

A higher minimum wage, together with government deficit spending, did finally lead the country out of the Great Depression.

And the reason the minimum wage helped rather than hurt the economy in 1938 is the same reason it will help today: When wages go up, workers have the means to spend more in the local economy. It is consumer spending that drives our economy forward—and it is also what gives businesses a reason to invest more in productive capacity.

A wage at that level would do what the minimum wage was meant to do when the FLSA was enacted—quicken the pace of economic recovery and ensure that all working people—including the many adult, full-time workers with children who work for the current minimum wage —have a decent standard of living. Pennsylvanians deserve that in 2021, just as they did in 1938.

Averages are far more affected by extremes of high and low, but the median, or midpoint, in a series is not.

But we do not have historical data for median wages in Pennsylvania prior to 1968, thus the table above presents the ratio of the minimum wage to the average wage.

The following table, however, adds a second line with the ratio of minimum wage to the median wage in Pennsylvania. The two data series track closely, giving us more confidence in the minimum to average wage data. 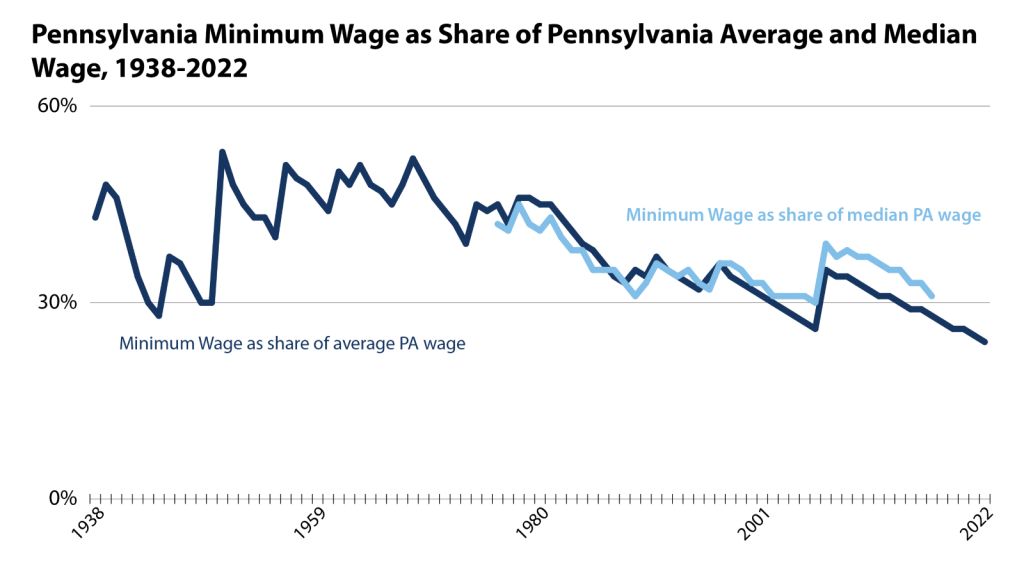 Marc Stier is the director of the Pennsylvania Budget & Policy Center, a progressive think-tank in Harrisburg. His work appears frequently on the Capital-Star’s Commentary Page.