The best and worst states for military retirees – and where Pa. stacks up | Tuesday Morning Coffee

We’re going to keep the Memorial Day vibe going on this first day after the bank holiday weekend by taking a dive into some data by our friends at WalletHub.

Pennsylvania, as you no doubt know, has a rich military history – from the American Revolution and the Whiskey Rebellion through the Civil War and World War One.

And here in Central Pennsylvania, you can’t walk far without running into someone who’s stepped up, volunteered and did their time for the nation.

So we can’t help but wonder: With that rich legacy, how does Pennsylvania stack up as a place for military retirees?

Thankfully, the wonks at WalletHub have done that work for us. They measured three criteria: Pennsylvania’s economic environment; its quality of life and the quality of the healthcare it provides for military retirees and all citizens.

The analysis also included “29 key metrics, ranging from veterans per capita to number of VA health facilities to job opportunities for veterans,” WalletHubnoted.

As we reported a few weeks back, lawmakers in the state House and Senate, along with Democratic Gov. Tom Wolf, have gotten behind, and passed, what’s being referred to as the ‘PA GI Bill,’ which “[provides] financial assistance for up to 10 semesters, or five years’ equivalent of the in-state rate of PA State System of Higher Education schools.” 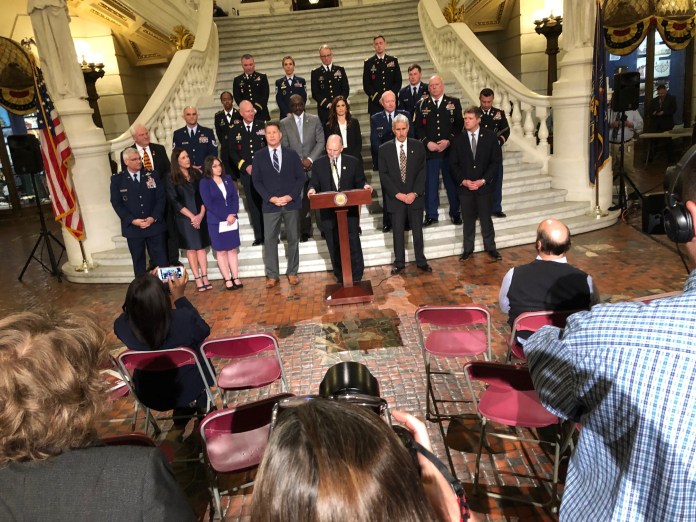 Pennsylvania finished 23rd on the WalletHub ranking, right in the middle of the national pack, with an overall score of 50.43. It ranked 45th for its economic environment; 35th for its Quality of Life rank, and 4th for the quality of its healthcare.

Here are the Top 5 states for military retirees, according to the WalletHub ranking.
1. Virginia
2. Florida
3. Maine
4. New Hampshire
5. Massachusetts

Asked what factors veterans should take into consideration when choosing a place to retire, Lt. Col. Michael Wise (ret), now the assistant director for Military and Veteran Services at Eastern Michigan University, had this to say to WalletHub’s analysts:

“There are several opinions out there on the best cities for military members to separate or retire in the US. I believe that when deciding where to retire, one should consider many things: for example, the location of VA Healthcare services, does the state offer tax incentives for veterans?; do public and private healthcare facilities exist that cater to TRICARE Select (retiree healthcare insurance program for spouse and dependents)?,” he said.

And Elizabeth Hardison takes a look at a Lancaster County state senator’s salvo in the abortion wars.

Elsewhere:
Pennsylvania lawmakers reported $83k in travel last year, the AP reports, citing newly filed financial disclosure forms (via the Inquirer).
The Post-Gazette brings us the story of a Mennonite woman who was excommunicated for failing to forgive her husband for sexually abusing her.
PennLive runs down the 12 biggest road projects that will snarl your summer travel.
The Morning Call looks at the Pennsylvania municipalities who went from wet to dry after last Tuesday’s municipal elections.

WHYY-FM explains why the fight over Alabama’s abortion law is like Pa’s fight over Roe v. Wade some three decades ago.
The PA Post looks at who’s making money from Pa.’s new voting machine requirement.
The Penn Book Center is staying open in Philly, BillyPenn reports.
The Incline takes a look at the long history of hockey in Pittsburgh – before the Pens.
Bernie Sanders has undergone an ‘extreme’ makeover, Politico reports.
Roll Call has the details on a Trump administration proposal to roll back nondiscrimination protections for transgender Americans seeking abortions.

What Goes On.
The House and Senate are both out until June 3, leaving a mere 27 days to pass a new state budget for the fiscal year that starts at 12:01 a.m. on July 1.

You Say It’s Your Birthday Dept.
Belated best wishes go out this morning to Kari Orchard, director of the northwestern regional caucus for House Dems, who celebrated over the weekend. Retroactive congratulations.

Tuesday’s Gratuitous Baseball Link.
Baltimore got past Detroit 5-3 on Monday. Do we dare to dream?

The best and worst states for military retirees – and where Pa. stacks up | Tuesday Morning Coffee