The best and worst state economies. And where Pa. stacks up | Wednesday Morning Coffee

So we’ve already written at some length this week about Pennsylvania’s burgeoning tax collections and the hyena-like glee with which some lawmakers are ready to devour a projected $813 million, year-end budget surplus.

But a new study by the financial literacy site WalletHub suggest that, even with its recent progress, Pennsylvania still has some ground to make up if it’s truly to move into the ranks of states that are the real economic movers-and-shakers.

The Keystone State finished 26th nationwide in WalletHub’s ranking of the best and worst state economies. The list was based on a series of metrics that included  everything from GDP growth and startup activity to the share of jobs in high-tech industries, according to WalletHub’s wonks.

You can mouse over the map below for state-by-state results.

The Top 5 States with the best economies, according to WalletHub are:

The Bottom 5 States, according to WalletHub, are:

And when it comes to preventing “brain drain” — which is something we here at the Capital-Star have written a thing or two about, Campbell has a few suggestions. We’d speculate that Dartmouth’s own Thomas W. Wolf, class of 1972, might well agree.

“One thing would be to fund education and encourage universities and technical schools to work with business to create effective training and re-skilling programs to keep workers’ skills up to date,” Campbell said. “A more aggressive approach is that of Vermont, which is now offering financial incentives for people to move into the state for work.”

And states, Campbell adds, should be wary of rolling out too aggressive a red carpet when it comes to trying attract new business. That often results in a “race to the bottom,” as states try to “outdo each other by offering low taxes or limited-term tax holidays where the firm pays no taxes for some period of time.”

And, he adds, states should “remember that tax rates are not the only thing firms consider when making decisions about where to go or entrepreneurs are making decisions about where to start a company. Other things include, for instance: quality of the labor force, infrastructure, housing availability for prospective employees, cultural amenities (which influence how easy it is to attract workers to the state), the quality of the school system [and the] potential for public-private partnerships.

Our Stuff.
Elizabeth Hardison has the lowdown on a Senate vote approving a massive expansion of Pennsylvania’s Educational Improvement Tax Credit program. The bill now goes to Gov. Tom Wolf, who may well be prepping his veto pen.

Sarah Anne Hughes runs down the latest push for a per-capita fee on municipalities that rely on the Pennsylvania State Police for public safety services instead of funding their own police departments.

Frequent flyer Nick Field uses a trio of maps to explain the lay of the land in a potential 2020 match-up between Auditor General Eugene DePasquale, a Democrat, and U.S. Rep Scott Perry, a Republican, in central Pennsylvania’s 10th Congressional District. 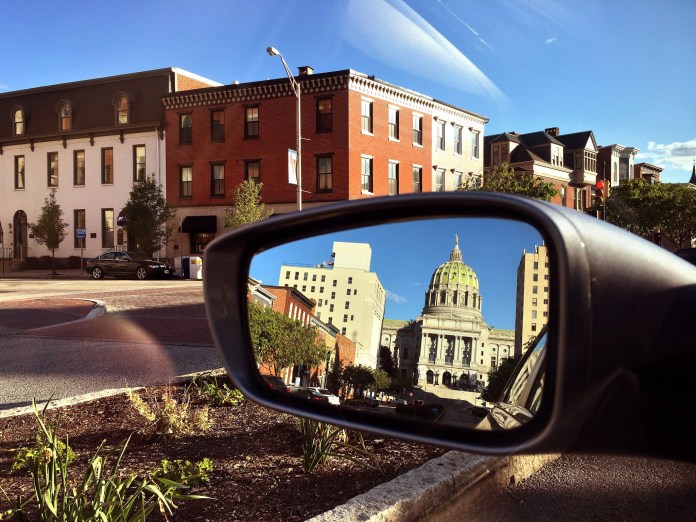 Elsewhere.
During an appearance in Philadelphia on Tuesday, Jill Biden told a crowd that she doesn’t want to see her grandchildren refighting fights ‘we’ve already won.’ The Inquirer reports.

Harrisburg’s Glass Lounge, long a spot where political deals were done and sealed, is up for sale, PennLive reports.

The Post-Gazette has the details on a ‘surprise’ bill eliminating the PIAA’s transfer rule.
From The Tribune-Review: “Local police departments across Pennsylvania are being advised to temporarily stop conducting sobriety checkpoints with officers from other departments in light of a recent state Supreme Court ruling overturning a woman’s drunken-driving conviction in Allegheny County.”

The state Senate has approved a bill allowing for the razing and sale of Allentown State Hospital, The Morning Call reports.

A new study has found some childcare obstacles for parents who work nights and weekends, Keystone Crossroads reports.

The Philly courts system is refusing to name the firm it hired to fix its virus-infected computer systems, BillyPenn reports.

A progressive super PAC called For Our Future PA is promising a big investment in the Keystone State, PoliticsPA reports.

Roll Call explains why U.S. Sen. Lindsey Graham, D-S.C., is dealing with the ‘ghosts’ of an old immigration deal.

WolfWatch.
Gov. Tom Wolf, wisely, one could argue, is nowhere near the Capitol today. At 11 a.m., he’ll ‘celebrate innovation and job creation,’ during an event at the Philadelphia Navy Yard.

What Goes On (Nakedly Political Edition).
8 a.m.: Breakfast for Rep. Mike Reese
8 a.m.: Breakfast for Sen. Robert M. ‘Tommy’ Tomlinson
5:30 p.m.: Reception for Senate Majority Leader Jake Corman
Ride the circuit, and give at the max, and you’re out a truly preposterous $28,500 thanks to a $25,000 maximum ask for Corman’s event at Volver in Philadelphia.

You Say It’s Your Birthday Dept.
Best wishes go out this morning to Politico Editor Carrie Budoff Brown, who also happens to be a veteran of the state Capitol press corps. Congratulations and enjoy the day.

Heavy Rotation.
Here’s ‘Joy’ by Bastille to get your Wednesday morning rolling.

Wednesday’s Gratuitous Baseball Link.
Baltimore got past Toronto 4-2 at home on Tuesday night. The Birds, at 21-45, are still a depressing 20 games out of first in the AL East. But every little bit helps.

The best and worst state economies. And where Pa. stacks up | Wednesday Morning Coffee