Trump’s lead in the Keystone State narrowed to 3 percentage points late Wednesday, USA Today reported, with 186,755 separating him and Biden. About 29 percent of all votes, or 763,000 ballots, still remained to be counted late Wednesday night.

Here’s a look, via NBC News, where things stood early this morning:

Biden’s wins in the Blue Wall states of the upper Midwest gave him 264 electoral votes, just six shy of the 270 he needs to win the race, according to the latest data.

That means Biden could conceivably afford to lose Pennsylvania, while scoring wins in Arizona and Nevada to win the White House. Trump, conversely, needs Pennsylvania, North Carolina and Georgia to keep his hopes alive. 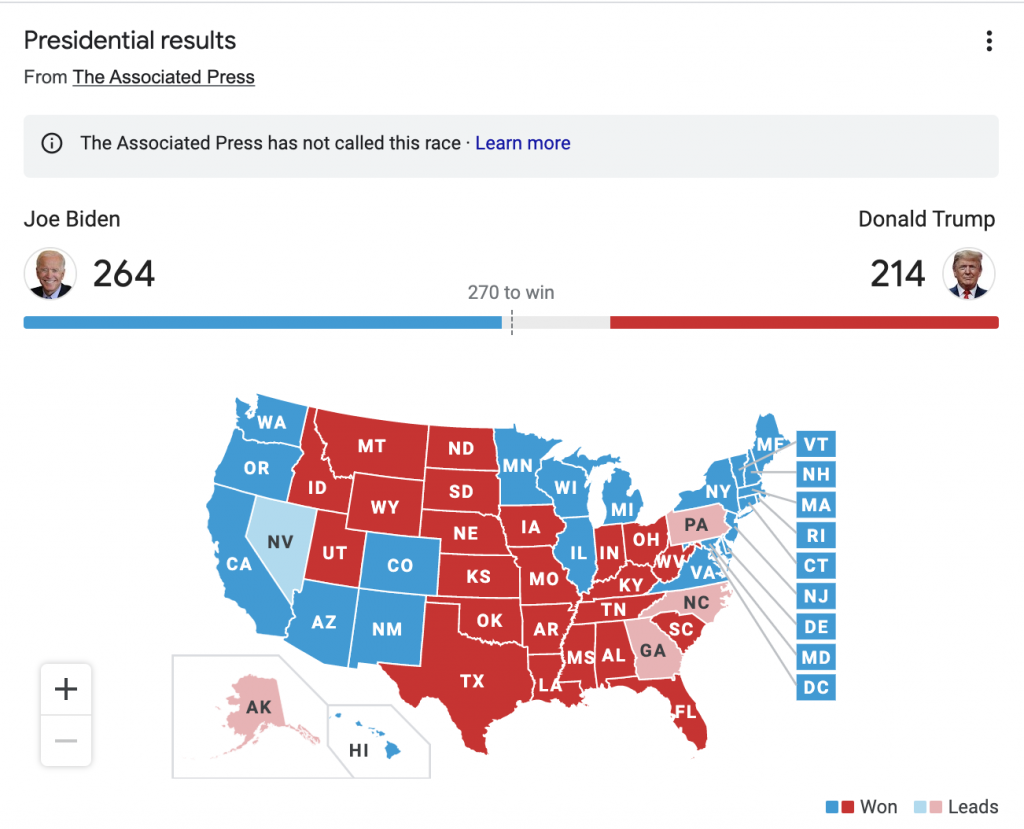 Trump’s campaign launched a legal assault on Wednesday evening, seeking to stop the vote count in Pennsylvania and other swing states. Taking to Twitter, Gov. Tom Wolf vowed to “fight like hell” to protect the vote in the Keystone State. Observers dismissed the blitz as an unserious and unfocused effort.

“If this is a legal war, he’s arming up with water balloons,” Loyola Law School professor Justin Levitt, a former Obama-era deputy attorney general told NBC News. “Don’t expect the litigation to stop, but don’t expect it to work, either.”

Meanwhile, Senate Republicans in Pennsylvania stepped up their campaign against Democratic Secretary of State Kathy Boockvar. GOP bosses want Boockvar to resign for her management of the election. Boockvar has defied those calls. 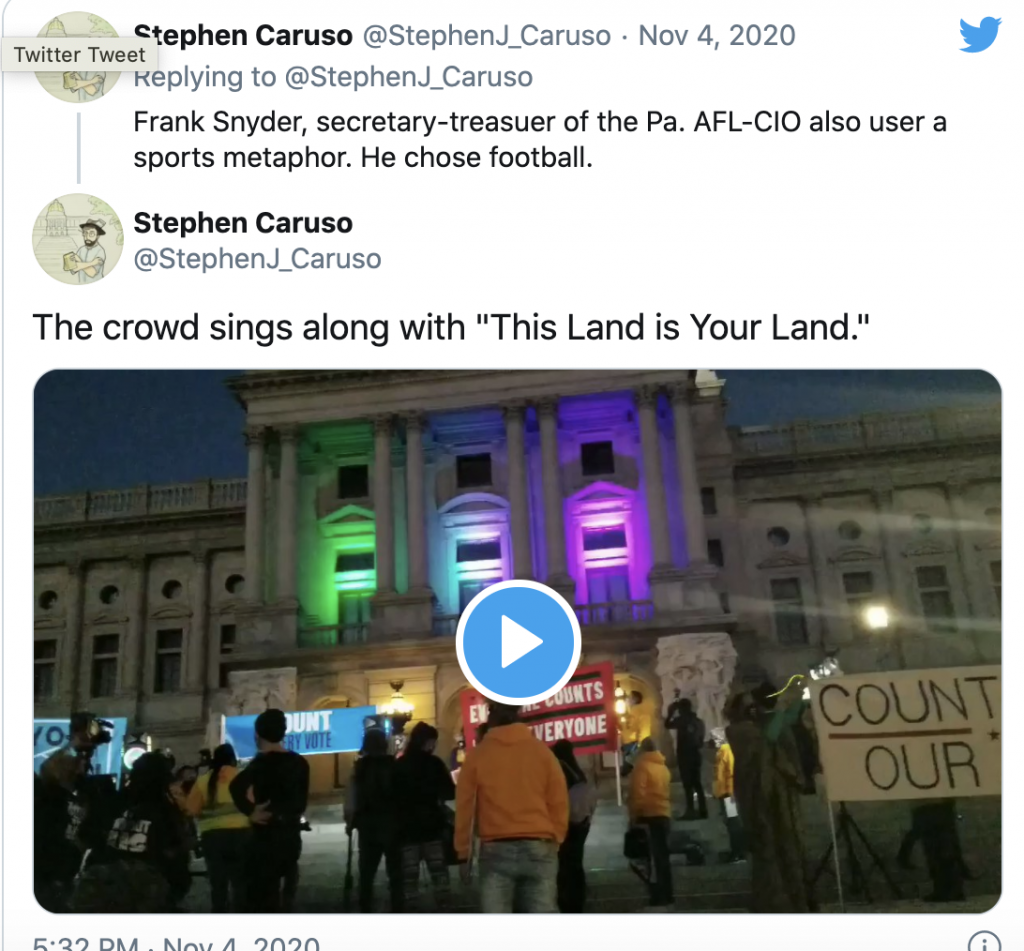 Members of the Philadelphia chapter of the Democratic Socialists of America, Seed the Vote, Refuse Fascism, the Socialists Alternative, and other local and national organizations congregated at John F. Kennedy Blvd. for the “Count Every Vote” protest, Rjaa Ahmed, the Capital-Star’s Hearken Election SOS fellow, reported.

At Philadelphia City Hall, they held posters saying “Black Lives Matter,” “Stop Trump Stealing the Election,” and “Count Every Vote.” That’s just blocks away from the Pennsylvania Convention Center, where ballots are currently being counted.

In Harrisburg, protesters began assembling on the state Capitol steps around 5 p.m. About 75 were in attendance from numerous unions and local activists groups. They chanted and sang as the sun set, demanding that every vote be counted, the Capital-Star’s Stephen Caruso reported.

You can read our continuing coverage of VoteCount 2020. And the Capital-Star will be back at it today.

Our Stuff.
Stephen Caruso runs down the latest in the fight for the Legislature.

Elizabeth Hardison has a look at the vote count in York County, which wrapped up its work on Wednesday.

From your humble newsletter author, here’s a look at the Trump campaign’s legal fight in Pennsylvania.

Hearken Election SOS Fellow Kenny Cooper has been keeping up with election protection efforts across Pennsylvania.

Democrats, who maintained their majority in the U.S. House, are reeling from losses on Capitol Hill and trying to figure out what to do next, Washington Reporter Arianna Figueroa writes.

In Philadelphia, LGBTQ community groups are providing physical and mental healthcare amid rising COVID-19 cases, our partners at the Philadelphia Gay News report.

Elsewhere.
The ‘blue shift’ is moving votes from Trump to Biden in the Philly ‘burbs, the Inquirer reports.
The Post-Gazette runs down the latest from western Pennsylvania.
PennLive brings you up to date on the closely watched 10th Congressional District race, where GOP U.S. Rep. Scott Perry is currently leading Democratic challenger Eugene DePasquale.
The Morning Call has the latest results from the races around the Lehigh Valley.
Vanity Fair brings you the view from northeastern Pennsylvania on Election Day.
With COVID cases on the rise, Erie County might impose a mask mandate (how is that not already a thing?), GoErie reports.
Newly released bodycam footage shows Philadelphia Police officers shooting and killing Walter Wallace Jr., WHYY-FM reports.
In Lebanon County, they’ve resolved apparent instances of voter intimidation, WITF-FM reports.
Republicans will learn nothing from a potential Trump defeat, NYMag’s Frank Rich writes.

Heavy Rotation.
Here’s something we’re all going to need when this is finally over. It’s ‘Sleeping Lessons’ by The Shins.