File this one under “Perfect Storm.”

States’ personal income growth hit a 20-year high in 2020 thanks to historic gains in unemployment benefits, federal aid, and other public assistance that drove the sharpest annual growth in two decades, new research has shown.

But before the free-marketers among you start praising the wonders of the market economy, the research by the Pew Charitable Trusts makes it quite clear that “without government support, most states would have sustained declines in personal income—a key economic indicator—as the COVID-19 pandemic took a toll on business activity.”

“Arizona and Montana recorded the top personal income growth for the year, 7.1 percent,” the Pew research concluded. “Both states benefited not only from a surge in government transfers but also from an increase in their workers’ aggregate earnings, unlike most other states. By comparison, Wyoming and several other states with economies more reliant on the energy sector experienced some of the weakest personal income growth as oil production dropped.”

For the purposes of its research, Pew defined personal income as state residents’ “paychecks, Social Security benefits, employers’ contributions to retirement plans and health insurance, income from rent and other property, and benefits from public assistance programs such as Medicare and Medicaid, among other items. Personal income excludes realized or unrealized capital gains, such as those from stock market investments.”

And all that income matters because Washington uses state personal income to help it determine “how to allocate support to states for certain programs, including funds for Medicaid. State governments use personal income statistics to project tax revenue for budget planning, set spending limits, and estimate the need for public services,” Pew noted.

Below, some other highlights from the fourth quarter of 2020.

One more big takeaway from the Pew research: “As unemployment started to recover from record highs, earnings began to stabilize, returning to pre-pandemic levels nationally in the fourth quarter. Still, combined earnings for all states fell 0.9 percent in 2020 after adjusting for inflation, the largest decline since the depths of the Great Recession in 2009.”

Our Stuff.
In this week’s edition of The Numbers Racket, Cassie Miller breaks down what you need to earn to rent a home in Pennsylvania. And, spoiler alert, the state’s current anemic minimum wage of $7.25 an hour just isn’t cutting it.

Black lawmakers could hold the deciding votes on two long-sought changes to state driving laws, giving them the rare leverage to ask that an expansion of police oversight be accompanied by protections for Black drivers, Stephen Caruso reports.

The four-member commission charged with the decennial redrawing of Pennsylvania’s legislative district boundaries has deadlocked on its pick for a fifth member to serve as its impartial chairman, which means the state Supreme Court will once again make the call, I report.

Growing concern and frustration among Centre County residents over animals in need and the diminishing presence of the state’s dog law wardens has led one state lawmaker to offer up a supplemental approach to protecting animals, Cassie Miller also reports.

A new report has revealed that there’s lead in a majority of Allegheny County’s water systems, our partners at Pittsburgh City Paper report.
As wildfires across the United States grow in size, intensity and duration each summer, members of Congress from the West are pushing for massive new investments in ecosystem management and wildfire mitigation, Capital-Star Washington Correspondent Allison Winter reports. 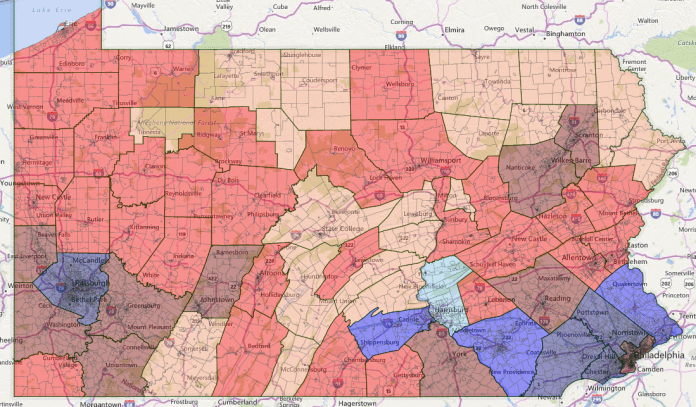 Elsewhere.
Are Pennsylvania’s legislative maps gerrymandered? That depends, Spotlight PA reports (via the Inquirer).
In the Mon Valley, near Pittsburgh, U.S. Steel has canceled a major investment — and questions remain, the Post-Gazette reports.
PennLive takes stock of police reform efforts in central Pennsylvania, and activists are hoping for more.
The Morning Call profiles a gay Catholic man who’s advocating for LGBTQ parishioners in the Lehigh Valley.
LancasterOnline explains how the lingering effects of the 2020 election are impacting the 2021 primary for local elections officials.
The York Daily Record explains what a $15/hr minimum wage would mean for the restaurant industry (paywall).
The Wilkes-Barre school board will hold hearings this week on closing two area high schools (paywall).

WHYY-FM explains why Philly’s air quality might be worse than you think.
WITF-FM explains the balance-of-powers showdown embodied by a proposed constitutional amendment seeking to limit the emergency powers of Gov. Tom Wolf and his successors.
Speaking to GoErie, Pennsylvania workers debunk myths about the minimum wage (paywall).
The Observer-Reporter goes deep on how local schools are trying to address pandemic learning losses.
PoliticsPA runs down last week’s winners and losers in state politics.
Some locals worry about the ecological impact of wind and solar farms intended to fight climate change, Stateline.org reports.
U.S. Sen. Tim Scott, R-S.C., is optimistic about Congress’ chances of passing police reform, Politico reports.

WolfWatch:
Gov. Tom Wolf heads to Philadelphia for a 2:30 p.m. event with the Philadelphia Flyers to encourage people to get vaccinated.

You Say It’s Your Birthday Dept.
Have a birthday you’d like noted in this space? Send me an email at [email protected].