State of independents: How a new poll signals 2020 trouble for Trump in Pa. | Friday Morning Coffee

President Donald Trump will return to Pennsylvania next week to visit the site of the new Shell Cracker plant out in Beaver County. And when he gets there, it’s a pretty good bet that he’ll do at least three things:

1. Extoll the beauty and various and sundry virtues of fossil fuels and brag about how, he, Donald Trump, is single-handedly responsible for reinvigorating the fossil fuel industry and bringing Pittsburgh back from death’s door (even though it wasn’t even remotely within eyeshot, and hasn’t been for years).

2. Call whomever he happens to be mad at, put upon by, victimized by, and/or aggrieved by, some pretty terrible things. And since the visit isn’t until next Tuesday, God knows who the Troller-in-Chief will be targeting by then.

3. And, for roughly the 1,347th time, brag about how he turned Pennsylvania red in 2016, and call upon his supporters to keep the Keystone State in the GOP column in 2020.

For many of his visits, Trump’s boasts about his Keystone State wins carried a bit of swagger. But with the state now firmly purple, thanks to Democratic gains on Capitol Hill, and in the General Assembly, in 2018, one suspects there may be a new tone of franticness to the 45th president’s appeals. And a new poll could add some fuel to that fire. 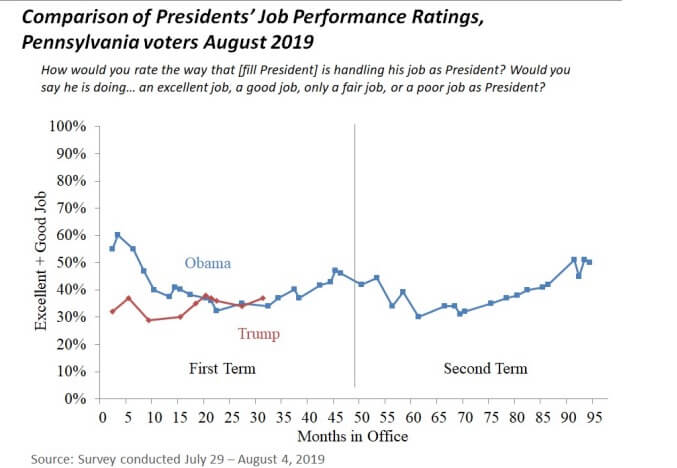 That warning note comes via a new Franklin & Marshall College poll released Thursday. And here, as we say in the journalism trade, is the nut graf for Trump:

“Two in five (38 percent) registered voters believe … Trump has done a good enough job to deserve re-election, and most (78 percent) of these respondents say they will vote for him no matter who runs against him. On the other hand, three in five (61 percent) voters say it is time for a change and four in five (85 percent) of these voters say they will vote against the president no matter who runs against him. Taken together, half (51 percent) of registered voters are firmly supporting a change and a quarter (29 percent) are firmly supporting no change, leaving another quarter who are still deciding. Not surprisingly, attitudes about re-electing the president are strongly associated with party and political ideology, but the desire for change is also affected by ratings of personal finances even after accounting for political ideology. The effect of personal finances on support for the president is strongest for moderates.”

As you can see from that chart above, Trump’s approvals are about where President Barack Obama’s were at the same time in his first term. And Obama went on to handily defeat Republican Mitt Romney in his 2012 re-elect.

But Trump, as has so often been remarked, isn’t Obama. And six in 10 voters believe it’s time to change horses, with a strong cohort within that (85 percent) saying they’ll vote against Trump no matter who runs against him. Of course, Trump doesn’t have a general election opponent yet. And that opponent hasn’t yet gone through the Trump Twitter maelstrom, so that could well change. 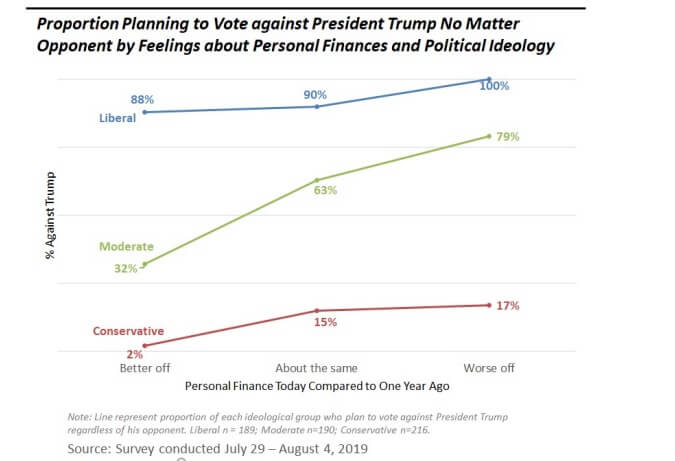 Now, it’s a political truism that it’s tough to oust a sitting president. And it’s equally true that the enormity of that task is compounded in a booming economy. And from all outward indicators, the economy is doing pretty well. But as we’ve pointed out elsewhere, there’s a growing body of evidence that suggests the Trump economy has not equally lifted all boats.

Veteran observers, including long-serving U.S. Rep. Mike Doyle, D-18th District, have argued that Democrats need to home in on that message. And certainly some of the current crop of 2020 hopefuls (notably Elizabeth Warren, Bernie Sanders and Pete Buttigieg) have made economic justice the cornerstone of their respective campaign messages.

But Democrats don’t need to convince other Democrats to vote against Trump. They’d do that even if the party were running a newly woke Attila the Hun(Nine in 10 Democrats give Trump poor marks in the F&M poll).

The voters the Dems need to reach are moderates and independents. And as the F&M poll suggests those voters are reachable with the right message. That’s backed up by the poll: The number of moderates who’d vote against Trump climbs steadily, going from 63 percent to 79 percent when you take into account their feelings about their personal financial situation.

And while the economic data may empirically show that things are going well, it’s also equally true that people often judge the vibrancy of the economy by how they feel they’re faring in that broader cosmos. It may not matter that the stock market is booming if bill collectors are at the door and you’re sweating making the rent or the next car payment.

The poll also shows that a quarter of independents (27 percent) give Trump good job marks, and about the same number are still trying to figure out whether it’s time for a change at 1600 Pennsylvania Avenue.

Independent voters made up about a third of the electorate in 2016. And a narrow plurality of them went for Trump over Democrat Hillary Clinton (43-42 percent) four years ago, according to Pew Research Center data.

Which is a long way of saying that, if Democrats can tailor their message and remember that most voters are more preoccupied by baseline pocketbook issues (witness the working class who deserted in 2016 for Trump) than they are about the Mueller probe or other (admittedly important) matters of palace intrigue, they’ll find a winning formula not only for Pennsylvania, but the other Rust Belt states that went red four years ago.

Our Stuff.
First off, many thanks to everyone who came out to Rubicon in Harrisburg on Thursday night to help us celebrate our first six months as a news organization. It was great to meet so many of you for the first time, and to see so many old friends and colleagues in one place. Your bar tab and generosity will go a long way to keeping our nonprofit newsroom viable and vibrant for a long time to come.

Your Martinis and munchies, for instance, will allow Stephen Caruso to keep bringing you stories like his explanation of why Republicans are so hopping mad at the state Supreme Court’s lurch to the left, and what they’re trying to do to change its eventual membership.

Importantly, your largess is helping to insure that more eyes and ears are on state government and Washington D.C. at a time when many local news organizations are pulling out of state Capitols and scaling back their Congressional coverage.

With four people watching the state Capitol, and three people covering Washington D.C., the Capital-Star has one of the most vigorous newsrooms in all of Pennsylvania. Your help makes that possible. And we appreciate every bit of it.

Here’s to the next six months and beyond.

Elsewhere.
The Inquirer explains how the ‘hidden costs’ of opioid addiction are on the upswing in Philadelphia.
Pittsburgh Mayor Bill Peduto is joining scores of fellow mayors nationwide to urge the U.S. Senate to pass expanded background checks, the Post-Gazettereports.
PennLive has the story of a man who died, badly bruised, after a struggle in Dauphin County prison.
Highmark’s CEO is hopeful that the insurance giant’s new deal with UPMC will attract new patients, the Tribune-Review reports.
The Morning Call crunches the numbers on new Allentown crime data.

This is how, according to SEPTA, climate change is screwing up your commute, Philly (via WHYY-FM).
Pittsburgh residents rallied Thursday to call for tougher gun laws, WESA-FM reports.
A judge is going to let a teacher’s racial discrimination claim against a Quaker school go to trial, BillyPenn reports.
PoliticsPA runs down the Almanac of American Politics’ profile of Gov. Tom Wolf.
Democratic prez candidate Tim Ryan led a gun-control ‘caravan’ to Mitch McConnell’s hometown, Roll Call reports.

Friday’s Gratuitous Soccer Link.
A new Premier League season is upon us. Our club, Aston Villa, is back in the top-flight. The Guardian has everything you need to know about the season kick-off.

State of independents: How a new poll signals 2020 trouble for Trump in Pa. | Friday Morning Coffee