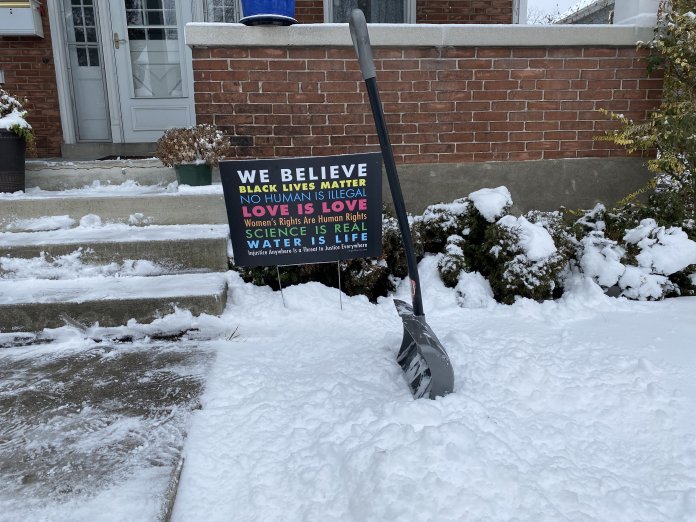 When I was a kid growing up in New England, and we got our first heavy snow of the season, my Dad and I would lace up our boots, pull on our gloves, hats, and heavy coats, and head outside in the quiet of a Litchfield County morning, and get to work.

I was maybe nine or 10, standing in the knee-deep snow alongside my Dad, our breathing even, and our shoulders moving in unison as we pulled up damp clumps of snow and ice, and he gave me some advice that’s stuck with me ever since:

Remember, he told me, to always shovel a little bit on the other side. Didn’t have to be a lot, just enough to make it easier for your neighbor when they came out to take their turn. Because next time, they’d return the favor.

It’s been more than half a lifetime since my Dad, who died in 2009, gave me that advice. But I’ve been putting it to work ever since. Shoveling a bit on the other side. Mowing a couple of rows over when the weather gets hot. And my neighbors, almost always without fail, have returned the courtesy. We don’t talk about it. We don’t have to.

That’s because it’s the right thing to do.

So, this morning, as I was out on the sidewalk, clearing snow from the storm that raced across Pennsylvania this weekend, that muscle memory came back to me. And I moved down the street, and cleared out a bit of my neighbor who lives to the left of me. And then I moved up the street, clearing out the sidewalk of the vacant house to my right, and further up to where an elderly neighbor lives as well.

I don’t tell you this to hold myself out as some paragon of virtue. And I shared some similar thoughts with PennLive’s readers a few years ago. But as I shoveled, it occurred to me that the words were worth repeating here.

As a nation, we’ve forgotten how to shovel out the other guy.

We come up with a million little reasons not to do it. They belong to a different political party. They’re a different religion or skin color. They get their news from a different source. Instead of shoveling a bit on the other side, we build up snow drifts to separate ourselves from each other. And then when the temperature drops, and those snow drifts harden into ice, they’re even harder to remove.

But what else is politics but shoveling on the other guy’s side, writ large? Every program that lends someone a hand is a little less snow that they have to do themselves. Every gesture of kindness is another foot or two of sidewalk that gets cleared. That’s the social contract.

And if you’re a small government conservative, and you’re reading this, and saying to yourself that it’s not government’s job to give someone a handout, then I’d urge you to read again.

I’m not saying you have to shovel out their entire walk, and then go up the front steps and get the driveway. But nor should you make it any harder for them to leave the house.

Because when you think about it, every bill that constrains someone’s right to vote; or limits a woman’s access to healthcare, or cuts funding to schools, or does away with general assistance to the poor, might as well be a snowdrift that you dump at the bottom of their driveway after they’ve been shoveling for hours and the path is finally clear.

But, yes, there are times when you have to go the full distance and take care of those who can’t, for whatever reason, be it age or infirmity, take care of themselves. My neighbor, two houses up, is an older woman with a pacemaker. There’s absolutely no reason for her to be out there shoveling herself out. I have no idea what she believes or who she voted for. You just do it because it’s the right thing to do.

And I can’t help but think that if we treated policymaking the same way we treated shoveling out our neighbors, or mowing their lawn a little bit on the other side, then a lot of the problems we’re facing now; the agreements that seem so intractable that they threaten to rip us apart, might be that much simpler to solve.

Shovel the other guy out. It only takes a minute. The benefits last far longer.

Elections officials, advocates see some to like — but a lot to raise eyebrows — in Pa. House GOP election bill

It’s last call — for now for to-go cocktails, as House and Senate jockey over bill

Some winter storm reflections: We’ve forgotten how to shovel each other out | John L. Micek