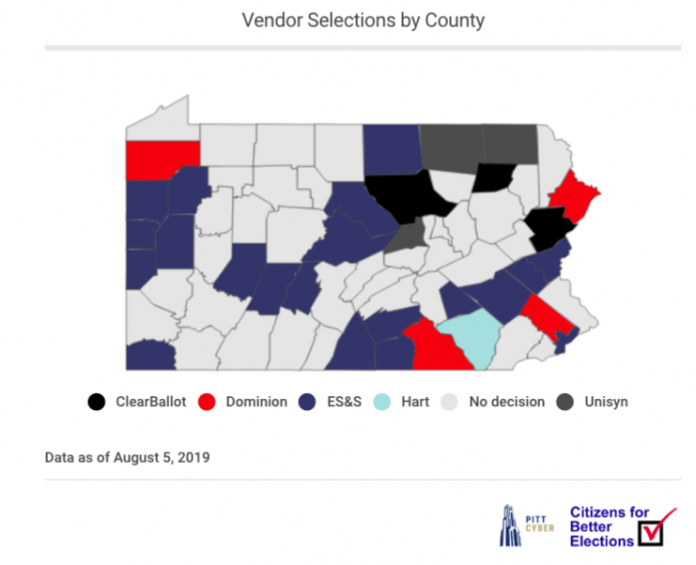 Your faithful Associate Editor Sarah here again, helming the Morning Coffee while John is on vacation.

A new analysis from Pitt Cyber and Citizens for Better Elections finds that some county voters are paying nearly double for new voting machines compared to their neighbors.

That’s even as experts say the cheaper systems — which involve a hand-marked paper ballot — are more secure.

In 2018, Gov. Tom Wolf‘s administration announced that counties would be required to buy new voting machines before the 2020 primaries. To help counties pay for the machines, the governor in July ordered a $90 million bond issue to cover 60 percent of the costs incurred.

Citizens for Better Elections, a “nonpartisan citizens’ group dedicated to promoting election security and efficiency in Pennsylvania,” says hand-marked paper ballots are the gold standard, as they put as “little technology between the voter and their vote as possible, preventing the possibility of errors due to machine malfunction, mis-calibration, or hacking.”

A recent report from the Brennan Center for Justice doubles down on this advice, as Route Fifty notes.

“Paper-based systems provide better security because they create a paper record that voters can review before casting their ballot,” the Brennan Center report states. “However, these paper records will be of little security value unless they are used to check and confirm electronic tallies.”

Our Stories
Staff reporter Stephen Caruso collects reactions from unions and lawmakers to the planned closure of two state centers for Pennsylvanians with intellectual disabilities.

As Wolf and state lawmakers called for gun control, House members debated the necessity of additional measures in a private email chain.

On our Commentary Page: John A. Tures, professor of political science at LaGrange College, considers: Did the assault weapons ban reduce mass shootings? Just look at the data.

Also in Commentary: Penn State researchers consider the cost of the opioid epidemic.

The Philadelphia Inquirer asks: With General Assistance now gone in Pa., how will people cope?

Jalopnik argues that (way) former Gov. Daniel Hastings was a hero … for cars.

An appeals court has affirmed a decision throwing out a lawsuit brought by truckers against the Turnpike Commission, according to Jurist.

Wolf Watch
At 10 a.m., Gov. Wolf will sign an executive order to combat gun violence. The signing was pushed from Thursday to Friday after six Philadelphia police officers were shot.

What Goes On
Rep. Jake Wheatley will host a House Democratic Policy Committee hearing on the “financial future of Pennsylvanians” in Pittsburgh.

Heavy Rotation
The words of James Agee, the music of Samuel Barber, and the voice of Leontyne Price: “Knoxville: Summer of 1915” is a truly perfect American song about summer.

Cap and trade for your car? Pa. is looking at limiting transportation emissions

Mummers leadership meet with City Council members over use of blackface

Cap and trade for your car? Pa. is looking at limiting...

Mummers leadership meet with City Council members over use of blackface