Six states expanded their EITCs in 2019 (No, not that one, Pennsylvania) | Monday Morning Coffee

Reminding us that words matter, that what we say matters, we’ll start this new working week with a data point from the good folks at the Center on Budget & Policy Priorities, who tell us that lawmakers in a half-dozen of these United States saw their way clear to expand their EITC programs in 2019.

No, not that one, Pennsylvania lawmakers. Don’t lace up your Sauconys for that victory lap quite yet.

We’re talking about the Earned Income Tax Credit, or ‘EITC’ which, according to CBPP policy wonks, will benefit 8 million Black households and 9 million Latino households nationwide.

As the CBPP notes, “Numerous studies show that the EITC increases employment, raises incomes, and reduces poverty,” for families with children.

Pennsylvania, (which does not have a state-level EITC referred to above) meanwhile, passed a modest expansion of the state’s two-decade-old Educational Improvement Tax Credit (also called the EITC), which hands tax breaks to businesses that donate to scholarship funds at private and religious schools. As our friends at WHYY-FM report, businesses get a credit on up to 90 percent of their donations.

Lawmakers initially approved — and Gov. Tom Wolf later vetoed — a $100 million expansion of the program, which was backed by state House Speaker Mike Turzai, R-Allegheny. The final expansion was sandwiched into this year’s iteration of the school code, which is basically a sprawling set of stereo instructions for driving out budget money to Pennsylvania’s 500 school districts.

And while it’s true that those scholarships will benefit minority and economically-disadvantaged students, it’s also important to note that state lawmakers either did not act on, or ended up eliminating, proposals intended to lift the most vulnerable Pennsylvanians out of poverty, or throw them a lifeline.

Even as they took a pass on boosting Pennsylvania’s $7.25 an hour minimum wage for the first time in a decade, Republicans who control the General Assembly also voted to drive a stake through the heart of Pennsylvania’s General Assistance Program, which provides $200 cash payments to the disabled, people fleeing domestic violence, or those dealing with substance abuse problems.

The money, which was never intended to be permanent, was designed to serve as a bridge while those 11,000 people served by the program waited to access more long-term services. Republicans argued that they boosted funding for those programs (mostly true), but they still left thousands of people high and dry who depended on the cash assistance program.

And lest you think that’s a ton of money, the $200 that recipients received is the cash equivalent of not quite two nights’ worth of food and lodging reimbursements that the 253 members of the General Assembly receive for showing up for work in Harrisburg.

Lawmakers have a base pay of about $88,000, leaders make more. Democrats in the state Senate are already floating a proposal to replace it.

Our Stuff.
It was a pretty full weekend hereabouts. Here’s what you missed if you missed our coverage.

On Friday, Staff Reporter Stephen Caruso covered a protest at the Berks Family Detention Center in Leesport, Pa., as ICE agents geared up for mass deportations across the country.

On Saturday, a sleep-deprived (we assume) Caruso legged it to Hershey, where Pennsylvania Republicans picked a new chairman in veteran hand Lawrence Tabas.

Elizabeth Hardison has this can’t miss explainer on cash bail — and why criminal justice reformers are working so hard to get rid of it.

On our Commentary Page, a child advocate in Philly explained why the child trafficking brought to light by the Jeffrey Epstein case is real, scary, and happening right here in Pa.; Penn State scholar Simon F. Haeder talks about what’s being done (and not) to help folks cope with surprise and huge medical bills, and a University of Texas, Austin expert argues that states and cities should stop firehosing tax incentives onto big corporations. 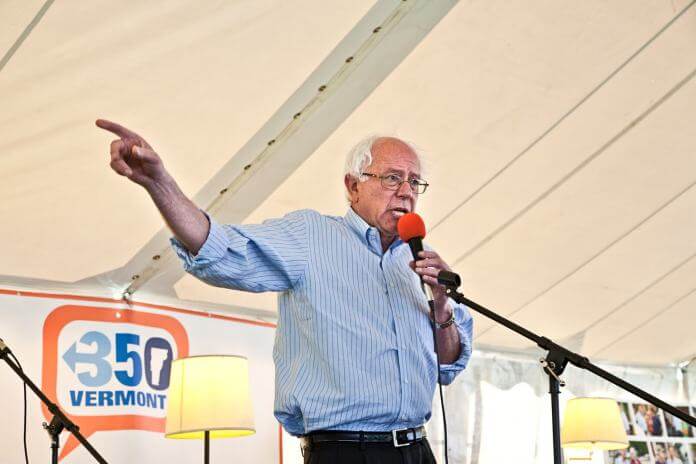 Bernie Sanders will rally at Hahnemann Hospital in Philadelphia on Monday, the Inquirer reports.
Pittsburgh police have released the identity of an off-duty city officer who was critically injured in a shooting in Homewood, the Post-Gazette reports.
PennLive looks at the lessons the troubled Harrisburg schools can take from the Reading school district.
Four years after it went on the books, most states aren’t enforcing a child predator law sponsored by U.S. Sen. Pat Toomey, R-Pa., the Morning Call reports.

Special needs adults in Philadelphia are ‘getting a league of their own,’ WHYY-FM reports.
WITF-FM takes a look at the state of gerrymandering in Pennsylvania.
BillyPenn tells the homecoming tale of some tavern owners in Philadelphia’s Northern Liberties neighborhood.
PoliticsPA has the past week’s winners and losers in Pennsylvania politics.
With hate crimes on the upswing, states are now requiring schools to teach the Holocaust, Stateline.org reports.
Bernie Sanders’ campaign has a beef with the press – they don’t think reporters are taking him seriously, Politico reports.

WolfWatch.
Gov. Tom Wolf holds a 3 p.m. newser in the Reception Room for a ceremonial bill-signing for a bushel of victim-centered legislation.

You Say It’s Your Birthday Dept.
Best wishes go out this morning to longtime Friend O’the Blog, and our former colleague, Marion Callahan Samkavitz, of Gatehouse Media,  and Jenna Clay, of WINK-104 FM in Harrisburg, both of whom celebrate today. Congratulations, and enjoy the day, colleagues.

Heavy Rotation.
Here’s a fave from Clean Bandit that we’ve had on repeat all weekend. From 2015, it’s ‘Stronger.’

Monday’s Gratuitous Baseball Link.
The O’s dropped one, 4-1, to Tampa on Sunday. Sigh.

Six states expanded their EITCs in 2019 (No, not that one, Pennsylvania) | Monday Morning Coffee

How Coraopolis is becoming a community hub for Pittsburgh’s… by Special To The Capital-Star August 11, 2022
Why won't Congress just extend the child tax credit? |… by Capital-Star Guest Contributor January 21, 2022
More diverse candidates are on the ballot for Harrisburg in… by Stephen Caruso April 24, 2022